Danger in the Himalayas: The risks of climate change 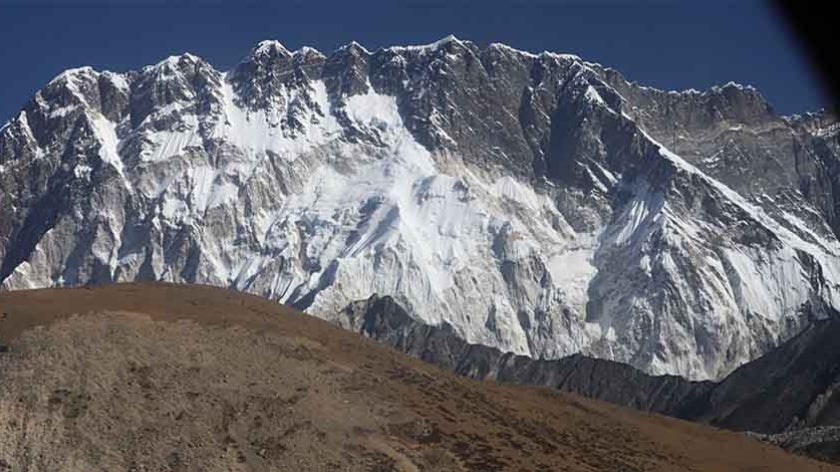 As the glacier melts faster than ever due to global warming, the Imja lake’s water levels keep rising. Photo: Kamal Raj Sigdel

More than 60 years ago in the lower reaches of the Himalayas, a few ponds formed due to the slow melt of the Imja glacier. Like little secrets, they stayed hidden from view. Today they are gone, swallowed up by a ballooning lake that fascinates trekkers and locals alike. Imja Lake is an imposing body of water that stretches for nearly two kilometres. It is a stunning vista, but the lake poses a deadly threat. As the glacier melts faster than ever, due to global warming, the lake’s water levels keep rising. The fear is it could burst its banks, or worse yet that a quake could trigger an outburst, sending water cascading downstream that could kill thousands of people.

Sitting at an altitude of 5010 meters, about 148 meters deep, and holding over 75 million cubic meters of water, an outburst from Imja could cause massive destruction, affecting between 90,000 to half a million people, and damaging property worth over US$ 9 billion.

To blunt that threat, the Government of Nepal and Nepal's Army, with support from the Global Environment Facility and UN Development Programme, have built a system to relieve pressure on the lake. Sensors monitor water levels and water is released via a canal.

Knowing that the lake is being monitored is a relief for people who live downstream. Fumu Yangzum does a little farming for a living and also runs a guesthouse for trekkers. When she was about 8 years old farming with her parents, they heard an unusual and loud explosion. She recalls the entire mountain vibrating. We looked at the Dudh Koshi river and we could see a huge mass of water, debris, and wood spiralling down the river. The flood swept away her uncle’s house, barn, and the cows he owned. It swept away entire villages, she recalls. People say Imja can burst anytime and we hear rumours time and again, she adds.

Remote sensing and other studies based on satellite data reveal that there are over 1400 such lakes in the Hindu Kush Himalayan range, spread across Afghanistan, Pakistan, India, Nepal, Bhutan and China. At least 21 in Nepal are identified as potentially dangerous, six are considered high risk, including Imja Lake. In 2015, when Nepal was struck by a major earthquake, people living downstream from Imja expected the worst.

Manisha Rai recalls that day. “It was nine in the evening. We saw people running uphill. They said a big lake had burst and we had to run to a safer place,” says Rai, owner of a teashop in Thada Koshi. “I immediately picked up my 18-month baby and ran towards the top of the mountain.” Luckily it was a false alarm. “I know the army has done some work at the lake, but still we don’t feel safe. You never know what can happen when.”

"There is always a risk of an outburst, in the event of an earthquake. Since Nepal falls in a high seismic zone, the best we can do is to remain alert,” says Lt. Colonel Bharat Lal Shrestha. "This is the first lake we have worked on. There are 21 in total that are identified as dangerous. But this is a very good start. This is a model of how we can work together to save the lives of people and adapt to climate change.”

Sherpas in the Himalayas know their lives and livelihoods are being compromised due to changing weather. “The glaciers are melting because of the pollution from big industrial countries,” says Ang Phruba Sherpa, chair of the Lukla Rural Municipality, the gateway to Mount Everest. As more snow melts the mountains are turning black, exposing their rocky surface. It is affecting the tourism industry here, and there is little anyone can do," Sherpa adds. “World leaders should think seriously and take some concrete actions before it is too late.”