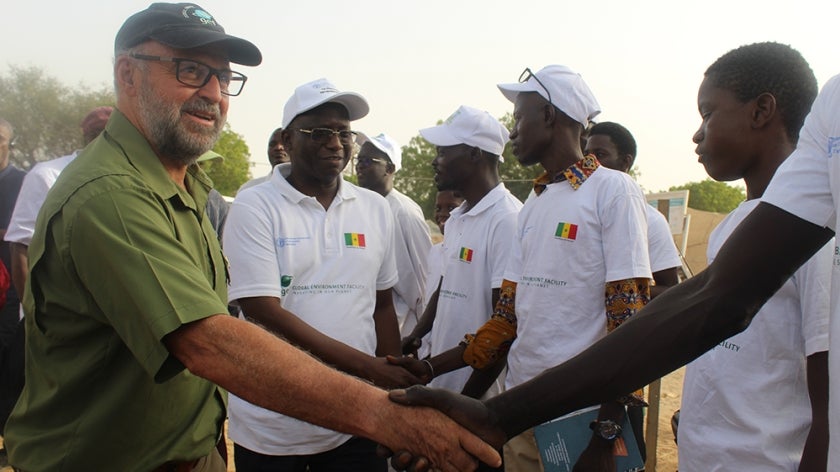 Having grown up on a farm, Carlos Manuel Rodriguez, GEF CEO and Chairperson, was eager to meet on May 14, 2022, and discuss with women and men from the village of Ngueye Ngueye in Ngoye, Senegal who benefited from an innovative project managed by the Food and Agriculture Organization (FAO) and supported by the GEF’s Least Developed Countries Fund (LDCF).

The local economy of Ngueye Ngueye is based on agricultural production, but the effects of climate change and soil degradation have been weakening the millet value chain and threatening the community’s nutrition and food security. Extensive and semi-intensive livestock farming is the second most important economic activity in the area, and it is practiced by all households and contributes to reducing poverty and improving agricultural yields.

To help improve the living conditions of Ngoye farmers, FAO is implementing an innovative integrated project "Integration of cattle fattening, biofertilizer, and millet production through farmer field schools." This project builds off of the successes of the project "Mainstreaming ecosystem-based approaches to climate-resilient rural livelihoods in vulnerable rural areas through the Farmers Field School methodology" that was supported by the GEF through the LDCF. This initiative is unique thanks to the integration of cattle fattening, biofertilizer production for agriculture, and biogas production for domestic use.

In two years, the farmers’ community has seen significant results. The Jambaar Association is a local association whose members include all the beneficiaries, and its president, Papa Assane Faye, noted that the community nearly doubled its oxen to 113 animals in less than two years thanks to cattle fattening techniques. The community is also producing cotton cake, wheat bran, and natural straw for the animals that can be sold for additional income.

"We also produce biofertilizers for millet and corn cultivation and market gardening,” said Mr. Faye. “More than 20 households are producing biogas for domestic use from the reared oxen. We have also set up a climate resilience fund that allows us to make loans to members with flexible repayment terms. To date, 113 farmers, including 42 women framers, have benefited from this fund for a total of nearly 6 million CFA francs. This resilience fund will ensure the sustainability of activities at the end of the project”. 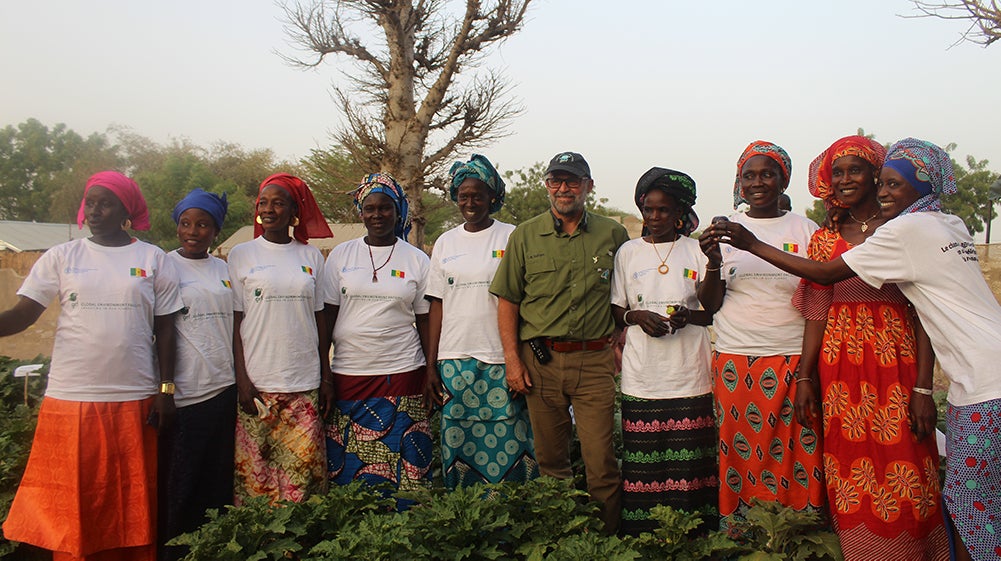 "We have increased our production thanks to the bio-fertilizers we use,” said Brigitte Thiaw, President of the women’s group of the Jambaar Association. “We are no longer sick because they are not chemical products, and the advice provided by the supervisors of the agro-pastoral school field allow us to produce and market without any problem. We want a second phase of the project to increase our market garden areas because our village's demand for market garden products is increasingly strong”.

While visiting their market garden, the GEF CEO saluted the efforts of the women’s association to protect the environment. He also noted the satisfaction of the households who use the biogas produced from the organic matter of the oxen raised in the concessions.

"This is an original initiative that integrates several related activities that contribute to protecting the environment and improving the living conditions of farmers,” said Mr. Rodriguez. “The production of biofertilizer reduces the use of chemical pesticides and the production of biogas also reduces the use of woodcuts from fields and forests. I encourage farmers to continue the path they have taken to build climate resilience."

According to Makhfouss Sarr, Assistant FAO Representative in charge of Programmes for Senegal, "In two years, producers have adopted a pragmatic, farmer field school approach. Farmers have understood and adopted climate change adaptation practices that have contributed to increasing agricultural production and improving their livelihoods and food and nutrition security”.

The achievements in Ngoye are the result of the combined efforts of several stakeholders including the National Fund for Agro-Sylvo Pastoral Development (FNDASP), the Ngoye Town Hall, the Ngoye Sub-Prefect, and the members of the Jambaar Association who are actively involved in its success.

This piece was originally published by FAO.