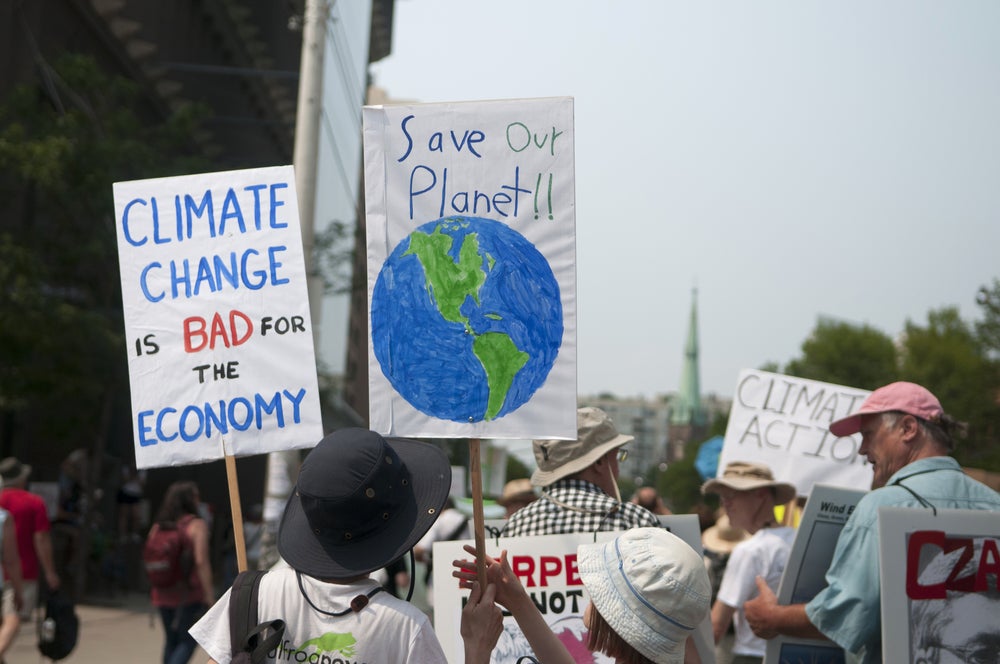 Protesters with signs urging to save the planet with climate control. July, 2015, Toronto, Canada.

On April 19-22, world leaders gathered at the United Nations Headquarters to sign the Paris Agreement on Climate Change. Ahead of the high-level summit, UN agencies and partners responsible for the climate change agenda were producing press releases, media advisories, and running social media campaigns aimed at explaining to ordinary citizens worldwide the Xs and Ys of this historic event.

Why? Because citizen action matters. When it comes to climate change, government action and citizen participation have to go hand in hand.

For those of us who think that driving a hybrid, biking to work, or cutting down on red meat will save the planet from falling into Anthropocene - bad news, it will not. As essential as they are, individual actions alone will not make the difference - we need big players’ commitment, from business and political leaders at all levels of society to reduce carbon emissions, phase-out fossil fuels, and switch to clean energy.

But at the same time, we cannot expect results from high level agreements and dialogues that happen behind closed doors. Citizens of all the countries that signed the Paris Agreement need to understand the importance and assume responsibility for helping their governments stick to the commitment and deliver on their climate agreement promises.

That is why Forrest Whittaker, Jeffrey Sachs, Princess Sarah Zeid of Jordan, and Naoko Ishii, among other prominent figures, took part in the Digital Media Zone salon discussions at the Paris Agreement signing ceremony in New York.

A new way to communicate what is happening at the UN - the Digital Media Zone (DMZ) served as a bridge between the United Nations and the general public, translating high level diplomatic discussions into an engaging conversation. From April 19 until April 22, the Digital Media Zone ran in parallel with the high-level meetings, where media influencers, bloggers, and journalists from around the world engaged in active discussions related to the Sustainable Development Goals and Climate Change.

In their session “Seizing the opportunity of a low-carbon and climate-resilient future” Naoko Ishii, CEO of the Global Environment Facility (GEF) and Lord Nicholas Stern of the London School of Economics discussed what needs to be done to tackle climate change and what outcomes should we expect to see. Ms. Ishii and Lord Stern started off by explaining that the current conditions on Earth are essential to our existence. They are responsible for making us who we are and we have to understand the risks of going wrong in our actions. But most importantly, we have to understand what we can do, the social, environmental and economic benefits of looking after Earth’s natural capital, from fish stocks to forests, and the opportunities we can capture.

The COP21 and Paris Agreement signify the global recognition that the health of the planet – the climate, oceans, forests, land - is essential for sustainable development. And we now need to use the international momentum to attract political, business and citizen attention to the issue of safeguarding and improving these essential global environmental commons.

We can now clearly see the alternative paths of our development as a civilization. We can build cities where we can breathe, move, and be healthy and productive. We need to clearly show to the world the examples of what can be done at the global level, when governments signed the Ozone Layer Protection Agreement in 1985 and Paris Agreement last week, as well as at the local level, when people get together and work collaboratively on waste reduction in their neighborhoods or community energy projects.

So what is next in the fight against climate change? Following the historic signing ceremony on April 22, the Climate Action 2016 Summit on May 4-6 will convene global leaders from government, business and civil society in Washington, DC to showcase and discuss actions all sectors are already taking to make the Paris Agreement on Climate Change a success.

Leaders including United Nations Secretary-General Ban Ki-moon, World Bank President Jim Yong Kim, COP21 President Ségolène Royal, former U.S. Vice President Al Gore, Mayors, CEOs from business and civil society will take the stage at Climate Action 2016 to discuss what has been done and the work we still have to do now to achieve our climate goals.

The Paris Agreement is an important step forward, but it won’t get the job done by itself. Individual actions are great, but not enough. Formal agreements by governments are critical, but cannot be considered a guarantee – private sector engagement and citizen participation is needed to keep countries committed and on track. Digital media initiatives like DMZ at the UN are becoming essential for involving citizens in high-level national and international decision-making. Important discussions, like that of Ms. Ishii and Lord Stern, need to be made available and understandable to the general public as addressing climate change will require solutions that are both “bottom up” and “top down.”