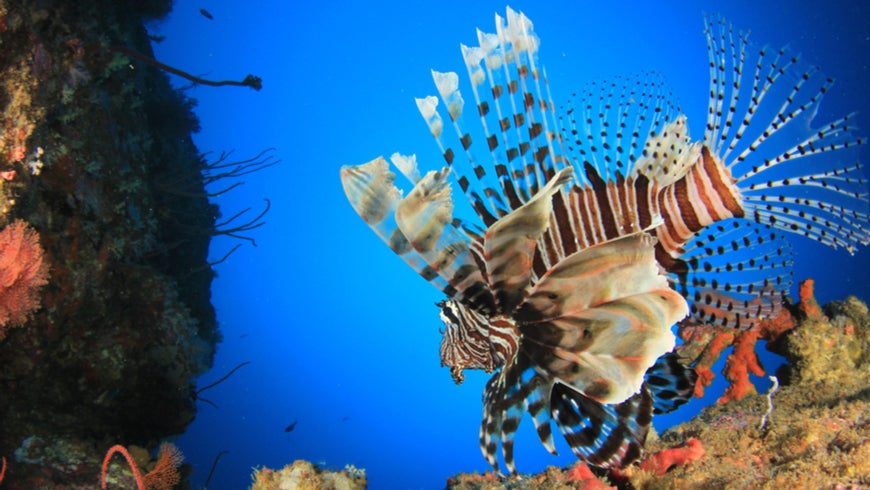 Seeing a lionfish while diving in the Caribbean is a cause for mixed emotions. On the one hand, one marvels at the exquisite beauty of the fishes’ flowery fins and its amazing adaptability to a range of habitats, from shallow estuaries with low salinity to deep reef environments. But then you remember that these fish don’t belong in the Caribbean, and that the very versatility noted above makes them an invasive menace. Indeed, if the fish you are looking at is a female, she may be carrying up to 30,000 eggs, and may have thirty or more native fish or crustaceans in her stomach.

One of the many impacts of the Anthropocene era on global biodiversity is the increased spread of invasive species, like the lionfish, due to rapid globalization. With the United Nations Ocean Conference taking place in New York next week, the conservation and sustainable use of the oceans and marine resources is high on the international agenda.  While long recognized as an environmental and biodiversity threat, invasive species also pose a threat to livelihoods, particularly in developing countries where incomes may be heavily dependent upon a single sector or product.

Traditionally, efforts to eradicate or control invasive species have been focused on public sector interventions.  But control efforts are often expensive and are either out of reach, or pose severe strains on limited budgets of developing countries.  Hence there has been growing attention to identification of market-based control approaches which create commercial incentives for removing the invaders, providing a financially sustainable means of control.

Such approaches were highlighted during a recent GEF Expanded Constituency Workshop (ECW), in Grenada, which brought together GEF partners and stakeholders from sixteen countries from across the Caribbean region.  As a special part of the workshop, participants learned first-hand about innovative initiatives to control invasive lionfish, which are threatening marine ecosystems and livelihoods across the Wider Caribbean.

Much has been written about the incursion of lionfish, which has been described as the “worst marine invasion ever”. In a nutshell, two species of lionfish, which are native to the Indo-Pacific have invaded marine ecosystems in large areas of the Western Atlantic, particularly the Wider Caribbean. First sighted in the late 1980’s, they have spread throughout the region. They have no natural predators in the Caribbean and are able to reproduce as frequently as every four days with each female producing up to 2 million eggs per year.  Their population densities can reach levels more than 10 times those found in their native range. They are known to prey on more than 100 species of fish and crustaceans including several that are commercially or ecologically important.

Scientists and marine conservationists agree that the only way to control the lionfish invasion is human intervention - basically removing as many as possible.  Indeed, there is growing evidence that if lionfish populations can be kept at low levels, native fish populations recover rapidly.  But due to the high reproductive rate of lionfish and the dispersal of eggs and larvae via marine currents, removals need to be undertaken regularly.\Making the removal programs financially sustainable poses a unique challenge that requires innovative approaches and partnerships, bringing together the public, private, and civil society sectors.  GEF has supported such innovations in several countries.  These have ranged from support to environmental protection and fisheries authorities on incorporation of lionfish control into their marine ecosystem management strategies, to support for development of markets for lionfish products.

The good news is that lionfish are delicious (as attested by participants at the Grenada workshop, who had a chance to sample lionfish kebabs).  As such, the development of a commercial lionfish fishery is seen as the most effective market-focused control strategy.  The bad news is that lionfish can’t be harvested using standard large-scale fishing gear such as nets or lines. They either have to be hand-speared or hand-netted, which is very labor intensive and expensive. So, there is a need to somehow create additional incentives for removals. It is also necessary to create demand, as lionfish aren’t well known to consumers or restaurateurs.

GEF-supported initiatives in Grenada, St. Vincent and the Grenadines and Belize have supported training of fishers on safe handling of lionfish, consumer education, and awareness raising among chefs and restaurants, and GEF Small Grants Program projects in Grenada and St. Vincent and the Grenadines include eco-tourism components, enlisting divers to participate in lionfish hunts.

A particularly innovative initiative, also highlighted in Grenada, is the development of markets for lionfish jewelry.  This jewelry, made from parts of the fish that were otherwise discarded, not only raises landed value per fish creating additional incentive for removals, but also creates new income and empowerment opportunities for women in coastal communities that are negatively impacted by the invasion.  Lionfish jewelry initiatives have been supported directly by GEF Small Grants in Grenada and St. Vincent and Grenadines, and indirectly by a GEF project in Belize, where a vibrant association of lionfish jewelry artists has been established, comprised of women from coastal communities across the country.

Lionfish jewelry items, as well as several copies of the Reef Environmental Foundation’s Lionfish Cookbook, were also offered as prizes as part of the GEF Knowledge Day session.

It is hoped that the examples shared during the workshop will inspire other countries in the Caribbean to explore these and other innovations in addressing the threat that invasive lionfish pose to their marine ecosystems and economies.

The GEF, through its work to protect and conserve biodiversity in support of the Convention on Biological Diversity, has supported work to prevent, monitor, control and eradicate invasive alien species in at least 25 countries. In GEF-6, the work has focused in particular on island ecosystems where invasive alien species have caused the extinction of dozens of species already as well as serious losses in the economy in agriculture, fisheries, tourism and even pests in everyday life.