Why companies should worry about losing wildlife 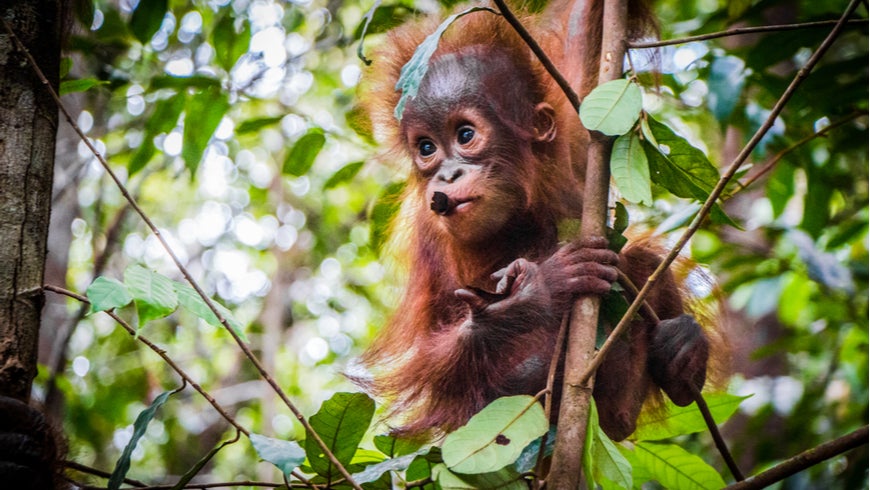 A baby orangutan hangs on a tree in Borneo. Photo: Alex East/Shutterstock

Biodiversity has decreased by 60 percent in just four decades, the WWF Living Planet Index has concluded. Scientists even speak of the Earth entering the sixth extinction event in its history, and it appears that the destruction of natural habitats may have been the starting point of the COVID-19 crisis and could generate other epidemics in future.

All this is being driven, says the Intergovernmental Science-Policy Platform on Biodiversity and Ecosystem Services (IPBES), by climate change, invasive species, overexploitation of natural resources, soil pollution, and urbanization.

This situation may not yet have attracted as much political and media attention as the equally challenging concerns related to climate change, but more and more analyses are beginning to highlight the rate of species decline and its inherent threat to human welfare.

Nature produces elements essential to human activity – from food and shelter to the active ingredients of medicines. The implicit contributions of each species in our economies are far-reaching: artificial pollination, for example, would cost an estimated 153 billion euros per year, exceeding any economic viability.

Biodiversity loss endangers ecosystem services, which threatens both society and businesses that depend on them, as well as investors and insurers that rely on a well-functioning economy. The potential loss of key ecological services, and the erosion of the global commons, are growing concerns for investors. Being able to assess the biodiversity impact of investments would enable them to identify opportunities better and, in doing so, help support solutions rather than environmentally unsustainable business practices.

At AXA, we view the biodiversity challenge as a natural extension of our climate efforts and as the next frontier of sustainable finance. Being a company which, over the past five years, has taken important decisions to advance the fight against climate change, we are convinced that preserving biodiversity requires an equally broad collective commitment from all stakeholders – from private-sector actors, including financial institutions, to governments, NGOs, and civil society.

As a global investor and industry leader, we started publicly committing to strong action by signing up to Act4Nature (recently evolved into Act4Nature International) with ramped up commitments. We published Into the Wild – Integrating nature into investment strategies, a report co-developed with our partner WWF, emphasising how biodiversity loss may be tackled by investors through new forms of public-private collaborations, and calling for the creation of a dedicated taskforce, modelled on the Taskforce on Climate-related Financial Disclosures, to provide investors with common biodiversity risk metrics and a harmonized reporting framework. AXA also launched its third “Impact Investment” fund last year, investing to protect natural capital, promote resource efficiency and improve the resilience of vulnerable communities to the effects of climate change and biodiversity loss.

As an insurer, we are developing new mechanisms to protect ecosystems better. AXA XL, our entity dedicated to commercial insurance and large risks, is working on how to insure mangroves, which provide natural protection for coastal areas against natural disasters, and is involved in the Ocean Risk and Resilience Action Alliance to protect oceans through solutions linked to mutualization. Lastly, the AXA Research Fund has committed 250 million euros to support science and actively supports academic research on biodiversity risks.

Having been among the first large institutional investors to engage in the fight against climate change, we know that the financial sector cannot drive sustainable change on its own. The voluntary initiatives we have taken over the past years can go only as far as a competitive market environment will allow. Adequate incentives and guidance are needed for pioneering issues where there is not yet a level playing field.

Adoption of international, science-based biodiversity targets by governments at the Convention of Biological Diversity's 15th Conference of the Parties in Kunming, China, next March is the surest way to provide this much-needed clarity, enabling companies and financial institutions to translate nature conservation objectives into robust long-term business strategies. We need a “science-based” Kunming Agreement that carries the same transformative influence for governments and businesses worldwide as the Paris Agreement imprinted on the battle against climate change five years ago.

'We need to put nature at the center of economic activity'