The theme of the meetings and the high-level segment was "A future detoxified: sound management of chemicals and waste". 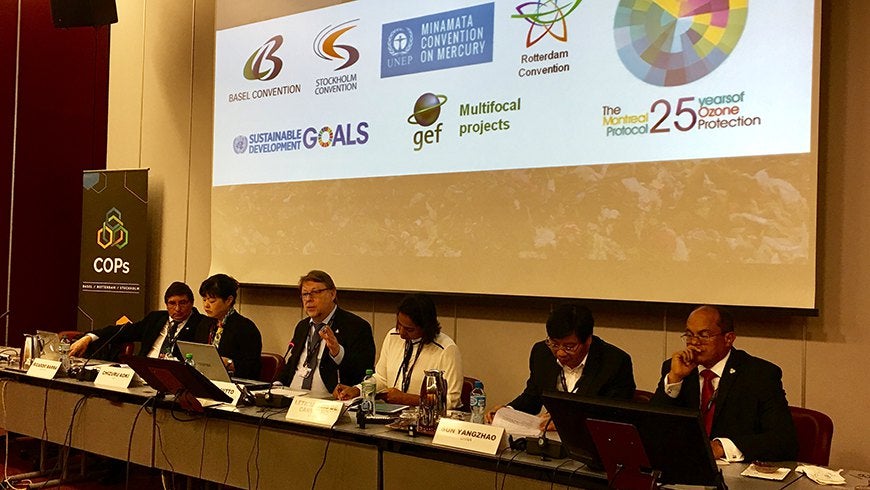 The organization of GEF support for chemicals and waste has significantly evolved over time. The GEF Operational Strategy (1995) included an ozone program, and that Strategy and the Operational Programs served as the basis for ozone programming for GEF-1 and GEF-2. In GEF-3, the GEF introduced a dedicated program for POPs. GEF-4 marked the beginning of explicit support for sound chemicals management through a cross-cutting strategic objective. Mercury was addressed to a limited extent in GEF-4 though one of the strategic programs under the International Waters focal area. In GEF-5, a Chemicals Strategy offered a unifying framework for support for the POPs and ODS focal areas, as well as for sound chemicals management and mercury. For GEF-6, the GEF Fifth Assembly created a single CW Focal Area—replacing the POPs and ODS focal areas.

This year marks an important year for sounds chemicals management.  In 2017 not only will the Basel, Rotterdam, and Stockholm Conventions hold the triple COPs, but the Minamata Convention is expected to hold the first COP.  The 7th GEF Replenishment is also underway and negotiations will take place throughout the year with the new replenishment period beginning in July 2018.  Also, this year the GEF’s Independent Evaluation Office (IEO) has released the first comprehensive evaluation of the Chemicals and Waste portfolio’s performance.

The IEO has concluded that the GEF’s strategy and programming in chemicals and waste have been largely coherent with the relevant guidance issued by the two conventions for which the GEF serves as Financial Mechanism: The Stockholm Convention on Persistent Organic Pollutants and the Minamata Convention on Mercury.

This side event was an opportunity for the IEO to present the findings of the Chemicals and Waste Focal Area Study with a discussion on how to use that information for future programming for impact.  Panellists and the audience will have the opportunity to take stock of the past as we embark on this important year of change and action in the area of chemicals.