Mongolia is best known for its endless steppes and vast Gobi Desert. Its most northern Province, Khovsgol, however, has an altogether different Geography. Here one finds a wild expanse of lakes and rivers, permafrost tundra , and taiga forests. It is home to minority groups such as the Duka e (also known as ‘Tsaatan’ or ‘people of the reindeer’) and the Darkhad, a small minority group with its own dialect. The lives of these people are intimately bound to the natural environment and many practice shamanism.

On the ecological map the area is part of the Altai Sayan Ecoregion, a global biodiversity hotspot, designated a WWF 200 Ecoregion. It consists of two grand mountain ranges; the Altai and the Sayan. Most of the latter lies in Russia, but a smaller part is located in Khovsgol. The region is home to globally threatened species like the snow leopard, taimen fish, musk deer and wild reindeer. 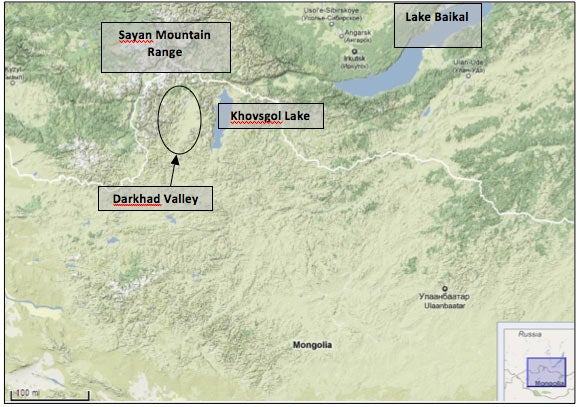 Map: Darkhad Valley in the north of Mongolia

Mongolia’s Ministry of Nature, Environment and Tourism (MNET) aims to conserve the globally important biodiversity throughout the Altai Sayan Ecoregion by working creatively and effectively with a wide array of partners. This effort is supported by the GEF project “Altai Sayan Ecoregion Project”, which is being implemented by UNDP. The project is co-financed by the Government of Netherlands, and collaborates closely with WWF, GTZ and the London Zoological Society as well as other bodies.

The project’s community based approach has proven highly successful in its biodiversity and land management projects. Communities are encouraged to work in groups. They agree on their leaders, community plans and community fund management. Under Mongolian law they can register with the government, thereby formally assuming responsibility for management of their essential natural resources. To date, 62 herder groups have been officially formed and are legally entrusted with the care of 500,000 hectares of this unique natural environment. 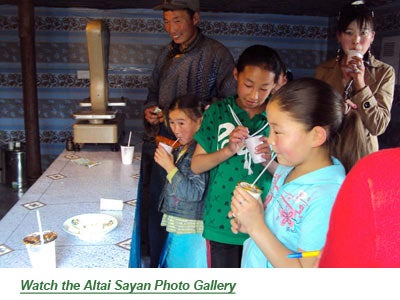 “I believe we have been able to achieve significant changes in herders’ perceptions,” says Amangul Sakeyi, the project’s social mobiliser. “Through forming a community group and taking charge of managing a defined area of land, people feel much more responsible for caring for their pasture and wildlife resources.”

In the Ulaan Uul (Red Mountain) area, the Buushdug community protects a natural spring and has improved its pasture management. In a small shop they sell milk products to generate revenue for their community fund. Another community, the Tsaagaannuur, cultivate wild Altai Onions, a plant that has become rare due to over-consumption in recent decades. Khovsgol Aimag Coordinator Tomorsokh Jal says: 'When I was young, wild onions were common in this area, but they are now rare.' The community plants the onions in their gardens and has replanted many back into nature. Other rare plants are also cultivated by the group, in a region traditionally knowing few vegetables.

Based on this research, a conservation policy was developed by the local government, while local communities became actively engaged in conservation of the fish by putting up signboards and monitoring poaching activities. Reports by local communities and government suggest that illegal Taimen fishing has now come to a complete halt. In the case of another species, whitefish, a ban was put in place in 2009 to enable the species to recover.

Even further north, close to the Russian border, is an area that is home to a few hundred reindeer herders known as Duka (or Tsaatan). Under the Mongolia’s socialist regime they were ensured of their income through hunting as part of the state system. Since the reforms in the 1990s they have had to look for other sources of revenue and have moved back to reindeer herding. They are supported by the project and the American-Mongolian NGO Itgel Foundation, to work as together as herding communities and also develop tourism related activities. 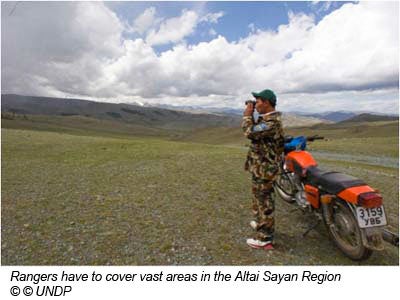 The work with local communities in the first years of the project has identified needs to strengthen the country's Community Based Natural Resource Management (CBNRM) Policy. In 2009 the project supported the revision of the regulation on CBNRM, which was approved in 2010 and includes incentives for CBNRM.

Besides communities, local government are crucial partners. Mainstreaming environmental considerations into other sectors is still a challenge in Mongolia. But in all 20 target sites, the project has successfully facilitated the formation of environmental units. These bring together environmental officers, rangers, inspectors, agriculture and land extension officers with others into working groups to mainstream environmental issues in local government’s work. The units are now part of the official government structure and are trained to support the development of herder groups to ensure this activity continues when the project ends. 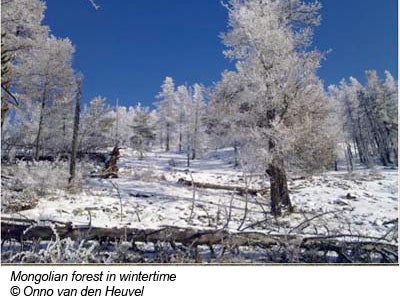 Sayan PhotoWhile the heart of the project lies with its local community work, the importance of protected areas (PA) is also a priority. PA support has been rendered in the form of training, development of management plans and biodiversity databases, scientific research, and through assisting in the establishment of new protected areas. Five new PAs have been established with the project’s support. In particular, the entire area north of the 50th degree latitude in Khovsgol (5.7 million hectares) has been declared a locally protected area. This means mining, which is becoming a major threat in the last years, is no longer allowed here. Furthermore, the project support for research on endangered Argali mountain sheep in Khoridol Saridag PA has led to the government plan to translocate Argali from other areas to ensure genetic diversity or the Khoridol Saridag population, which had sharply declined in the past decades.

New Threats and the Landscape Approach

While some important conservation successes have been made, new threats loom on the horizon. Over the past two years, informal small scale mining has been on the rise in Ulaan Uul, and it is reported that over 1,000 small scale miners are active in the region. Changes in the region's climate have also been observed and it is feared the permafrost is melting, with uncertain consequences.

These developments reconfirm that a landscape based approach focusing on connectivity of ecosystems and all threats to biodiversity remains necessary. In 2009 a conservation strategy for the Altai mountain landscape was developed by a team of stakeholders and experts. It was formally adopted by the Ministry of Nature, Environment and Tourism and integrated into local development plans. The strategy provides guidance and important information for policy development. A landscape strategy for the Sayan region is currently being developed. Continuous support is needed to preserve Mongolia’s biodiversity, natural wealth and the livelihoods, culture and future prospects of its people as all are inextricably linked. The GEF project is providing a sound foundation of sustainable conservation partnerships upon which future investments can build on to secure the conservation of this important ecoregion.