2010 IYB: Managing Water Wisely to Save Wetlands and Waterbirds

Human civilizations have risen by the shores of seas, rivers, and wetlands, the latter being remarkably productive ecosystems, teeming with biodiversity such as waterbirds and fish. Yet, where water has been abused and lost, wildlife and civilizations too have vanished. Now, more than ever, as human population increases and water demands grow, people and wildlife need secure and adequate sources of water for survival. The Siberian Crane Wetland Project, implemented by UNEP and executed by the International Crane Foundation, demonstrated that the delicate inter-connections between water, wetlands, wildlife and human welfare can be successfully managed to the benefit of people and biodiversity.

By the 1970s, seven of the world’s fifteen crane species were threatened with extinction and 11 remain threatened with risk. Similar negative trends appear in Asia among the other waterbird groups: 59% of known waterbird populations are declining, 27% are stable and only 10% are increasing. Meanwhile escalating human demand on limited water supplies and arable land is accelerating the loss and degradation of wetlands in Asia.

To help reverse these trends, the Siberian Crane Wetland Project aimed to secure the ecological integrity of a network of 16 critical wetlands needed for the survival of the Siberian Crane and other migratory waterbirds along their annual migration route of 5,100 km from breeding to wintering sites, through, the Russian Federation, China, Iran and Kazakhstan. The flyway wetland sites used by the Siberian Crane are shared by at least 27 globally threatened waterbird species and sustain millions of migratory waterbirds along their migrations across the Asian continent. For example, Poyang Lake in Jiangxi Province, China is internationally famous for its birdlife with over 300 bird species of which at least 16 are globally threatened. Winter surveys at Poyang have recorded 425,000 waterbirds on average, with a peak count of 726,000 birds in 2005. At least 11 globally threatened waterbird species have been recorded, several of which breed in Russia with significant proportions of their global populations depending on Poyang Lake. For example, in recent years over half of the world’s Swan Geese Anser cygnoides and White-naped Cranes Grus vipio migrate to the lake and over 95% of the world’s Oriental Storks and Siberian Cranes depend on Poyang during winter months. These wetlands are also of considerable socio-economic and cultural importance, supporting the livelihoods of local communities, as well as contributing to regional development. 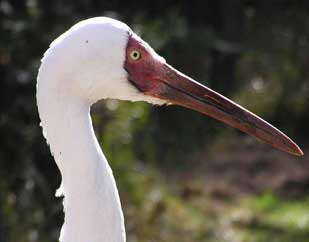 Cranes have great cultural significance and none more so than the majestic Siberian Crane. Cranes delight us with their ritual dances, their stunning plumage, and their calls that resonate miles across marshes and wetlands. The Siberian Crane was chosen as a flagship species for the project given its cultural significance in the four participating countries: China, Iran, Kazakhstan, and Russian Federation. Throughout these diverse cultures the Siberian Crane generated intense commitment from a diverse group of stakeholders to conservation initiatives for the benefit of the Crane, other migratory waterbirds, and the wetlands they rely on along their annual migration route. The map below highlights the migratory flyways that are the focus of the project and the key sites for the Siberian Crane (Grus leucogeranus) and other migratory waterbirds. 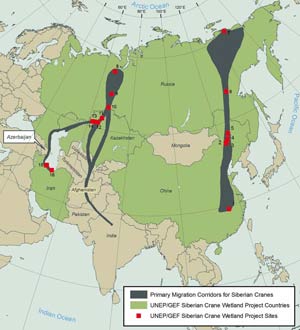 The project made considerable progress in the course of its six-year implementation, and various mechanisms have been established for sustaining its outcomes after the project’s completion in December 2009.

IRAN
The Iran project team has championed alternatives in the governance of wetland reserves through community involvement in the participatory management of its wetlands which is a new approach for Iran. This included establishment and capacity building for community based organizations, development of a microcredit scheme enabling local farmers and duck trappers to diversify their activities, and pilot testing of integrated pest management to reduce the use of agrochemicals in ricefields and associated impacts on health and the environment. The primary Siberian Crane wintering area at Fereydoon Kenar was established as a Non Shooting Area (5,427 ha) while protection status at the second site (Bujagh) was extended and upgraded to National Park (3,276 ha). A participatory management plan was completed for Fereydoon Kenar and stakeholder input facilitated for Bujagh, with gradual improvements in management effectiveness. Ramsar sites were declared at Fereydoon Kenar and extended at Bujagh.

KAZAKHSTAN
Kazakhstan made considerable progress during the project in expanding and establishing nature reserves that provide habitat to migratory waterbirds along the flyway. Naurzum was expanded by 130,000 ha (plus a new buffer zone of 116,726 ha) and included in a new World Heritage Site Saryaka Steppe and Lakes of Northern Kazakhstan, while a new national nature reserve was established at Urkash-Zharsor (29,334 ha). Correspondingly, management effectiveness increased dramatically at these two core sites. Five new Ramsar sites totaling 247,264 ha were designated and development of effective national public communications about the reserves has created the necessary basis for continued stakeholder engagement. A newly created non-governmental organization, Ak Tyrna (White Crane), is working on decentralized eco-tourism development, ecological monitoring and site management support. Support to local communities has resulted in the formation of community-based organizations and active programmes on sustainable livelihoods (e.g. ecotourism), environmental education, support for children with disabilities, and water management. Technical and legal advice for the maintenance of small impoundments has benefited isolated farming communities in this semi-arid region, building their support as stakeholders for local reserves.

RUSSIAN FEDERATION
The Russian Federation has created effective ecological monitoring programs and piloted innovative ways of local governance of federal nature reserves in response to decreased central government support after the fall of the Soviet Union. Significant expansion of protected area coverage was achieved, with the area of Kytalyk Resource Reserve increased by 991,000 ha plus 1,472,000 ha of local level reserves covering the main Siberian Crane breeding grounds in Yakutia. Breeding grounds in West Siberia were provided increased protection through regional-level protected area network development, with a new park of 317,000 ha established as a buffer zone for the existing federal reserve at Kunovat. Site management plans developed for project sites in Yakutia are being used as models for the Republic’s protected area system, while outline plans were developed for the sites in West Siberia. Management effectiveness improved significantly at the Yakutia sites.

At the regional level, the project facilitated the accession of both Kazakhstan and Iran to Convention on Migratory Species (CMS) and Kazakhstan to the Ramsar Convention, and strengthened international cooperation within the framework of the CMS Memorandum of Understanding on the Siberian Crane.

One of the most notable regional achievements has been the development and spread of annual “Crane Celebrations”. The purpose of the celebrations is to draw attention to conservation problems of cranes and their habitats, their transnational inter-linkages, and cultural significance. By the end of the project in 2009 the events had spread from just 11 sites in Russia to 120 sites in nine countries and helped secure local commitment and buy-in to wetland conservation by developing local pride in the conservation role each site plays in the regional flyway and in the conservation of migratory waterbirds. The participants have included teachers, students, hunters, frontier guards and local government staff and attracted significant media attention.

The Siberian Crane Wetland Project demonstrated how a flagship species can serve as the rallying cry for conservation and sustainable use of wetlands while generating benefits for wildlife and humans alike. To ensure that these benefits are sustained, the project has mainstreamed the continuation of site and national activities through national and provincial agency programs and budgets, established several long-term agreements, including grants, with stakeholders and related agencies and integrated key project activities with ongoing flyway conservation programs supported by the International Crane Foundation and CMS Secretariat.

Project facts: “Development of a Wetland Site and Flyway Network for Conservation of the Siberian Crane and Other Migratory Waterbirds in Asia”. Duration 2003-2009, $10 million GEF grant, co-financing $17 million, matched by $20 million associated funding.