In 1631, the Seaflower, sister ship to the famous Mayflower, set sail in London. Its destination was the recently discovered southwestern Caribbean islands of Santa Catalina and Henrietta (currently known as San Andres); its precious cargo about 100 members of England’s puritan gentry with a vision for a new way of life. Over 350 years later, the Corporation for the Sustainable Development of the Archipelago of San Andres, Old Providence and Santa Catalina (CORALINA) embarked on a journey with a similarly ambitious vision: the long-term protection of the remarkable biodiversity and traditional culture of those same Caribbean islands, by establishing and implementing the Seaflower Marine Protected Area (MPA). The GEF has been a committed partner in this endeavor, and the achievements to-date reflect both CORALINA’s dedicated leadership as well as the importance of the sustained financial support from the GEF, in partnership with the Inter-American Development Bank (IADB) and the World Bank. 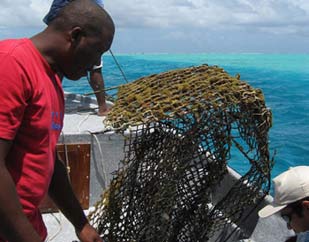 After starting operations in 1995, CORALINA began working on the myriad terrestrial environmental problems in the archipelago. A partnership project with Scotland’s Heriot-Watt University, started in 1998 and funded by the European Union, enabled CORALINA to complement this terrestrial focus by jointly identifying with the local community marine resource issues and determining suitable solutions. That same year, four events created the conditions for the eventual creation of the Seaflower MA: i) the internet arrived on Old Providence and Santa Catalina islands; ii) CORALINA initiated the process of obtaining UNESCO Biosphere Reserve status for the archipelago which was achieved in 2000; iii) a conference presentation by the Florida Keys National Marine Sanctuary about multiple-use zoning in the sanctuary captured the attention of CORALINA and the island community; and, iv) CORALINA became aware of the Global Environment Facility as a potential supporter of its conservation efforts.

In June 2000, the GEF approved the medium-sized project “Caribbean Archipelago Biosphere Reserve: Regional Marine Protected Area System”. This project, implemented through the World Bank, executed by CORALINA and supported both financially and technically by the Ocean Conservancy, exceeded expectations by culminating in the formal declaration of a 65,018km2 MPA , the largest MPA in the Caribbean and one of the ten largest in the world.

But it is not merely the sheer magnitude and globally important biodiversity within its borders that are impressive about the Seaflower MPA. The process that CORALINA spearheaded to arrive at the MPA’s declaration was exceptional. According to Cheri Recchia, Chair of Seaflower’s International Advisory Board, “CORALINA has, with this project, exemplified international best practice for establishing MPAs. They led a truly participatory process, and gathered and used the best available biological and socioeconomic information, combined with stakeholder input, to design all aspects of the Seaflower MPA: objectives, external boundaries, zone types and placement, and regulations. The design of the MPA itself is cutting-edge, encompassing the islands and using a zoned approach to allow a range of human activities balanced with critically needed ecological protections, including a well-thought-out series of “no-take” areas critical for restoring reef system health and productivity. With these solid foundations, the Seaflower MPA is poised to generate significant benefits not only for Colombia, but for the Caribbean region.” 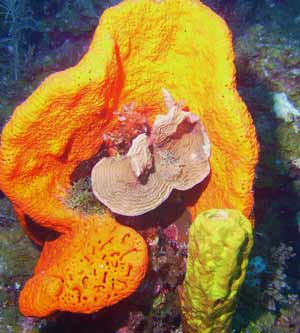 The highly participatory process funded through the Caribbean Archipelago Biosphere Reserve Project involved fishers, other local stakeholders and international scientists working side-by-side on the detailed zoning of the MPA, as well as on the development of an integrated management plan, conservation action plans for key species and habitats, and a community-based monitoring program. This work was underpinned by comprehensive biodiversity and socio-economic assessments, and complemented through capacity building activities led by CORALINA’s team, including a college-level MPA program to train young professionals locally, on- and off-island training of fishers and divers, and community outreach programs.

The key results of the project were the legal declaration of the Seaflower MPA and the development of its Integrated Management Plan. The latter lays out all major elements required to achieve the MPA’s five objectives: conservation, sustainable use, equitable distribution of economic and social benefits, protection of historical use rights, and education. Also, as a direct result of the medium-sized project, artisanal fishers regained access to traditional fishing sites; which is essential to the archipelago’s native communities who derive both their cultural sense of identity and their traditional livelihoods from their relationship to the sea. Over the course of the project, the team was able to turn initially skeptical community leaders into MPA advocates and more than 90% of active fishers on the islands supported the final outcome. Zoning agreements were signed by all primary stakeholders and newly enacted regulations received considerable community support, even though various communities had to forego their access to unrestrained fishing and other forms of use.

The project was hardly completed when, in late 2005, Hurricane Beta hit Old Providence and Santa Catalina islands, an event as unusual as it was devastating. Since CORALINA, by virtue of its sustainable development responsibilities, was closely involved in the reconstruction effort, progress on the MPA was significantly affected. Another major constraint was lack of funds; the medium-sized project had provided an analysis of income-generating options for financing Seaflower’s management over the long-term, but these had not been implemented, meaning there was no operational budget for the newly-declared MPA. CORALINA was able to obtain small grants that allowed some activities to be continued, including public outreach, monitoring of queen conch (over 95% of Colombian queen conch comes from the archipelago) and environmental training of governmental enforcement personnel posted to the islands. But it became increasingly clear that a concerted and adequately funded effort was necessary to make the transition to a fully functional and effective MPA.

The GEF agreed to build on the previously-financed work and support a full-sized project, “Protecting Biodiversity in the Southwestern Caribbean Sea”, aimed at the effective implementation of the Integrated Management Plan, so as to protect, conserve and sustainably use the Seaflower MPA’s marine resources. This project, implemented by the Inter-American Development Bank (IADB) and executed by CORALINA, comprises four intricately linked components: adaptive management, financial sustainability, alternative livelihoods, and monitoring and analysis. The project was approved in November 2009 and is now in the early stage of implementation, but has already led to some promising advances. These include progress on establishing an international ‘Friends of Seaflower’ initiative; designing a pilot project for a marine-resource based Payment for Ecosystem Services scheme aimed at curbing beach erosion; developing site-specific methods to reduce the population and spread of lion fish in the MPA; elaborating operational details for the alternative livelihood programs; and reviewing current monitoring programs to determine the adjustments needed to transition to an adaptive, question-based monitoring of the MPA’s ecological, socio-economic and administrative performance.

These are the initial steps of a program of activities that will, over the course of the next five years: (i) establish the MPA management structure and support the collaborations with other entities on the islands to enable effective management of the MPA; (ii) implement the sustainable financial mechanisms that will provide the long-term funding for the MPA’s management; (iii) render key economic activities in the archipelago compatible with the objectives, guidelines and regulations of the MPA, so as to reduce pressure from these activities on threatened species and habitats; and (iv) implement a management-oriented monitoring and analysis system that informs decision-making by CORALINA and other authorities on the islands.

This is an ambitious program, but one that is essential for the MPA’s viability in the long-term. Only with these elements in place, will it be possible to achieve the Seaflower MPA’s objectives and protect the remarkable biodiversity and traditional culture of the archipelago. And it is a program that is strengthened by four critical advantages: CORALINA’s persistent, visionary leadership; the solid foundation laid during the MPA’s design phase; financial support and sustained engagement from the GEF, and the technical and financial support that CORALINA and the IADB were able to leverage through the GEF commitment. With these aspects “on board”, the Seaflower MPA is favored to master its challenging journey and fulfill its ambitious mission as successfully as its namesake did four centuries ago.

(A) Protecting Biodiversity in the Southwestern Caribbean Sea