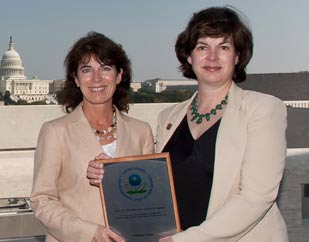 The U.S. Environmental Protection Agency September 23 recognized our colleague Marcia Levaggi, manager of the Adaptation Fund Board Secretariat for her past work with the Montreal Protocol that spanned more than a decade.

In the award summary for the 2010 US EPA Montreal Protocol Award, Kristinn Vazquez, deputy director of the Stratospheric Protection Division, Office of Air and Radiation noted that this accomplishment puts Marcia "among the world's most accomplished individuals and organizations working to protect the Earth's ozone layer."

Specifically as chair of the executive committee during her tenure there "she guided the body through many key decisions that helped facilitate the cost-effective phase-out of ozone depleting substances in developing countries. As chair of the Open Ended Working Group at the Meeting of the Parties on the 20th anniversary of the protocol, her patience and skills as a consensus builder helped the parties reach the historic decision on accelerating the phaseout of HCFCs, a decision with both ozone layer and climate implications."

Please join us in congratulating Marcia for this high honor.