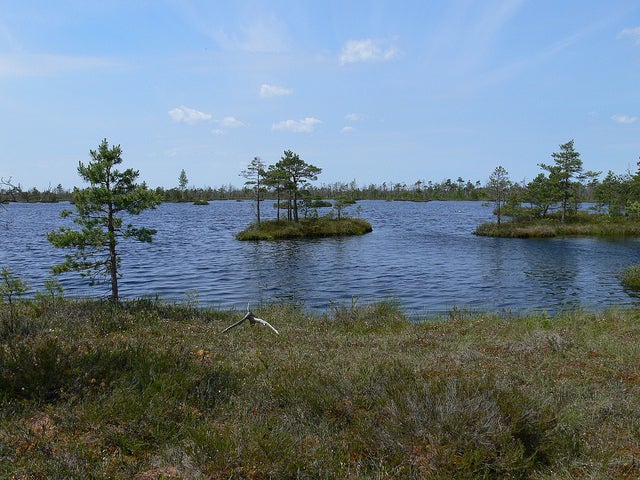 Before a massive draining of peatlands was launched in the second half of the 20th century Belarus owned 2.4 million hectares of natural mires. Between 1960 and 1980, one million hectares of mires were drained for agriculture, 300,000 ha were drained for forestry and another 286,000 ha for peat mining. After peat was extracted, damaged peatlands were converted to agricultural land for further use. However, in actual practice the efforts to cultivate degraded peatlands turned out ineffective, and such lands were generally abandoned. In the meanwhile, drainage channels continued to work properly, effectively draining mires and turning them into real powder kegs. The major part of mires drained for forestry shared the same fate. Lack of moisture caused partial change in vegetation: sphagnum communities succumbed to heather and ledum. The accumulation of decayed plants and drying of peat top layers made degraded peatlands vulnerable to fires.

The situation changed when in 1999 and 2002 large-scale peat fires swept across drained peatlands, causing drastic consequences for the environment and the national economy. Then ecologists approached the Government with a proposition to analyse the causes of peatland fires. The results of a pilot project implemented by the Ministry of Natural Resources and Environmental Protection of the Republic of Belarus and the Royal Society for the Protection of Birds (RSPB) revealed that the main cause of peatland fires is a disturbance of hydrological regime.

Possible solutions to the problem were suggested as part of the UNDP-GEF project "Renaturalization and sustainable management of peatlands in Belarus to combat land degradation, ensure conservation of globally valuable biodiversity, and mitigate climate change" (Peatlands-1). The project aimed at developing a regulatory framework, which would specify the procedure and rules for renaturalisation of degraded peatlands. The project successfully researched and tested various practical approaches towards restoring hydrological regime at 12 disturbed peatlands on the overall area of  28,000 ha. The project’s experience was applied for developing Belarus’ first practical recommendations on the environmental rehabilitation of degraded peatlands.

So far, about 50,000 ha of drained peatlands have been restored in Belarus due to various international and national projects and initiatives implemented by the Ministry of Natural Resources and Environmental Protection of the Republic of Belarus and supported by UNDP in Belarus, GEF, European Union, GEF Small Grants Programme, Michael Succow Foundation, Coca-Cola Foundation, and others. Domestic peat mining enterprises are involved in this work too: it is now a common practice to re-wet abandoned peat deposits after completion of peat extraction business.

The Government of  Belarus recognized that restoration of hydrological regime at degraded peatlands is the most effective means of preventing peat fires. According to the draft Strategy for the Sustainable Use of Peatlands, it is planned by 2030 to restore 15 per cent of the area of all Belarus’ damaged peatlands, which is about 500,000 ha.

The developing strategy of restoring and sustainable use of the country's peatlands was taken further as part of the UNDP-GEF project "Landscape approach to management of peatlands aiming at multiple ecological benefits" (Peatlands-2). The national implementing agency of which is the Ministry of Natural Resources and Environmental Protection. As regards to re-wetting, the project focused on developing and testing the method of restoring peatlands, damaged by forest amelioration. Works are underway to restore a hydrological regime at three large raised bogs with the overall area of 3,570 ha.

Belarus's experience in the environmental rehabilitation of degraded peatlands is widely used while conducting similar activities in Russia.

Due to the restoration of hydrological regime, after re-wetting, the peatlands, which burned almost every year before, did not catch fire even during the dry 2010 and 2015 years. Abandoned peat deposits - that caused most peat fires - after rising water levels became a popular place among the locals for fishing, picking berries and hunting. The potential of these territories for organizing ecological tourism considerably improved.

Positive dynamics can be also seen in terms of climate change mitigating. Due to higher groundwater levels, carbon dioxide emissions into the atmosphere reduced by almost 500,000 tons. During a short time after re-wetting, dry areas with scarce flora and fauna turned into oases of biodiversity with abundance of species inhabiting highly productive reservoirs and mires in their first formation stages. Re-wetted peatlands also provide resting grounds for aquatic birds where they make stop for food and rest during spring and autumn migrations.