The Coral Triangle Initiative (CTI) is centered on high-level political commitments and proactive implementation by governments of the Coral Triangle area, and supported by multilateral and bilateral agencies, non-governmental organizations, and private sector partners (development partners). The six countries have chosen to address-in partnership- the management, conservation and adaptation to climate change of the tuna fisheries and coral ecosystems in that region. 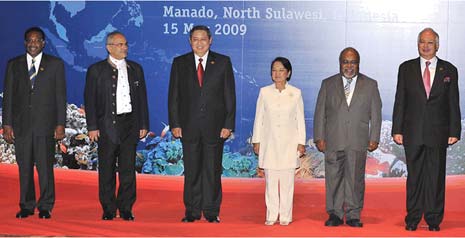 Six Heads of States/Governments signed the CTI Declaration in Indonesia on May 15, 2009

At the confluence of the Indian and Pacific Oceans, spanning Indonesia, Malaysia, Papua New Guinea, Philippines, Solomon Islands and Timor-Leste, the 1.6 billion acre Coral Triangle supports: (a) five commercial tuna species which spawn there and migrate to the Indian and Pacific Oceans - where 90% of the world’s catch occurs; and (b) the richest concentration of marine biodiversity: the highest numbers of coral, crustacean, mollusk, and marine plant species; and 3,000 species of fish – twice that of any other region.

The Coral Triangle also hosts 51 of the world's 70 mangrove species and 23 of the 50 sea grass species. Vital to livelihood of 120 million people, the Coral Triangle is not only a source of food but also a way of life fostered across generations by a close dependence on the marine environment. The Triangle supports the largest tuna fishing industry in the world, which generates billions of dollar in global income each year and its reef ecosystems also buffer coastal communities from cyclones and tsunamis. 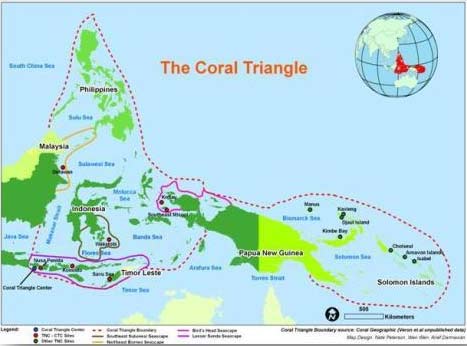 Sponsored by President Yudhoyono of Indonesia, the six CTI governments (Indonesia, Malaysia, Papua New Guinea, Philippines, Solomon Islands and Timor Leste) met in a first formal CTI Senior Officials Meeting in Bali in December 2007, where they agreed on: a common understanding of the value of the CT’s marine and coastal biological resources; nine Guiding Principles; and a framework for a CTI Plan of Action to be developed during 2008 and adopted at the highest political level.

This meeting was followed by a consultation event attended by senior officials from the governments of Australia and United States, and from the Global Environment Facility (GEF), the Asian Development Bank (ADB), CTI, The Nature Conservancy (TNC), and the World Wildelife Fund (WWF) during which the development partners endorsed the outcomes and offered support to CTI. Other meetings at ministerial level have followed, culminating into the CTI Summit, held in Manado in May 2009, where the six heads of states/governments signed the historical inter-state agreement CTI declaration adopting a 10-year plan of action to avert the growing threats to the region's coral reefs, fish, mangroves, vulnerable species and other vital marine and coastal living resources. The CTI declaration provides a strong example of cooperation for the world.

In his speech Indonesian President Yudhoyono highlighted that the aim of the CTI Summit was opening up a brighter future for the next generation in the region. He referred to the 1992 Rio Earth Summit where leaders failed to sign a treaty for the preservation of oceans which cover 72 percent of the earth. "That is why we are gathering here now to prevent the destruction of the reefs and safeguard them for the next generation," he said.

He announced Indonesia's plan to designate 20 million hectares of marine protected areas across the archipelago by 2020, as well as the intention of the government, over the next 3 years, to double the current amount of funding from its national budget dedicated to specific programs and activities stipulated in the CTI Plan.

"This Initiative brings together for the first time all the partners needed to mobilize action in the countries of Southeast Asia and the Pacific," says Monique Barbut, GEF CEO and Chairperson. "The sustainable management of these resources is crucial to ensure that an adequate supply of food exists to sustain millions of people living along the coastlines."

So far, the GEF is the largest contributor of funds to the CTI. To support the Initiative, the GEF Council endorsed, in April 2008, a program of $63 million that covers biodiversity, international waters, and adaptation to climate change activities. The program has also been able to catalyze more than $300 million of co-financing for CTI to conserve tuna and coral ecosystems while alleviating poverty.

The planning of the GEF CTI program was led by the countries and it was accompanied by the Asian Development Bank, the coordinating agency, and four other GEF agencies: FAO, UNDP, UNEP and the World Bank. A year later, the 76% ($45.5 million) of the funds have already been allocated for the implementation of nine projects in the six participating countries. The following are some of the projects that are currently under implementation or that are about to start: