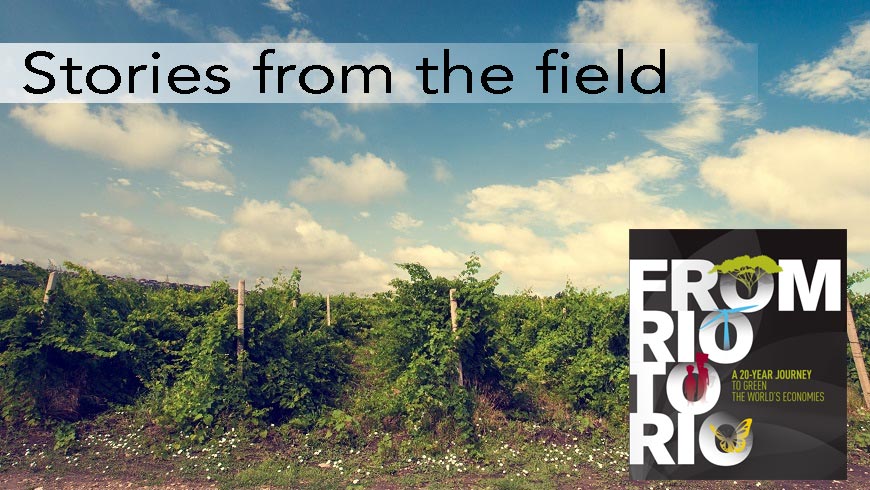 The goals of the GEF project, carried out by the World Bank, were to help Moldova manage and dispose of contaminated stockpiles and to strengthen the regulatory and institutional arrangements for long term control of POPs and other toxic substances.

The tiny village of Ratus sits at a crossroads in central Moldova, about 60 kilometers from the capital, Chisinau.

Surrounded by fields, with other small villages nearby, the few streets in Ratus cover less than a square kilometer, a village in most ways typical of rural parts of Eastern Europe. But until recently Ratus held a dangerous secret. For years, the entire district of Telenesti, some 850 square kilometers in size, sent tons of obsolete and prohibited pesticides to Ratus. These hazardous chemicals accumulated in rotting containers until 400 tons sat in an old warehouse, essentially a toxic ticking time bomb for the people and the environment in Ratus, across Moldova, and beyond.

In the Soviet era, particularly the 1970s and 1980s, Moldova imported huge amounts of pesticides to spur agricultural production. Between the 1950s and 1990s, farmers used 560,000 tons of pesticides, including 22,000 tons of the organochlorinated variety. Soil samples taken between 1976 and 1990 showed pesticide contamination levels 50 times the maximum allowable concentration. High concentrations of the pesticide dichlorodiphenyltrichloroethane (DDT) turned up in 60 percent of soil samples despite the prohibition of DDT in 1970.

As Ratus became a dumping ground for pesticides, so Moldova at large became a hot spot for deadly PCBs. Industrial expansion during the Soviet era meant rising demand for electricity and electrical equipment and a related need for cooling and insulating fluids that would not catch fire, as did the mineral oil previously used for those purposes. The solution came in the form of a relatively inert class of man-made chemicals called polychlorinated biphenyls, or PCBs. Throughout the latter half of the 20th Century, tons of PCBs accumulated in electric capacitors and transformers even though scientists had determined that they were potent environmental and health hazards in the 1930s. In Moldova, a major energy generating and transit hub for the Soviet Union, most equipment containing PCBs was out of use but still in place by the late 1980s, leading to oil spills and leaks from corroded capacitors. Approximately 20,000 PCB-containing capacitors containing about 380 tons of PCBs were situated in 20 electrical substations throughout the country, but especially at the Vulcanesti Power station.

After Moldova declared independence from the Soviet Union in 1991, owners of the chemicals and warehouses abandoned their stockpiles and the containers began to decay, leaving wind and rain to spread the poison across the region. “We didn’t believe that we would ever be free of CHAPTER 8 Defusing a Ticking Time Bomb in Moldova Defusing a Ticking Time Bomb in Moldova 73 this danger threatening the public health and the environment,” the mayor of Ratus village, Raisa Pavlov, said in 2007.2

Many people who came into contact with the pesticides did not know anything about the risks and did not comply with any of the minimum protection requirements. Excessive exposure to the chemicals in rural areas led to an increase of ailments, including chronic hepatitis and cirrhosis. By the late 1990s, increasing numbers of mothers were being hospitalized, and the number of children born with malformations was growing. Most people who worked with chemicals got seriously ill, and some died of cancer. The threat to the environment and health of thousands of people was real and growing.

The problem is hardly Moldova’s alone. Pesticides, industrial chemicals, and unwanted by-products of industrial processes known collectively as Persistent Organic Pollutants, or POPs, are a global scourge, particularly so in Eastern Europe and Central Asia. There they form part of the grim environmental legacy of collective agriculture and heavy industrialization that led to the near death of the Black Sea and the Danube River, and left pollution hotspots scattered throughout the region.

POPs can cause diseases in humans even in unimaginably small concentration — parts per trillion or even less. They can remain toxic for decades because they resist degradation in air, water, and sediments, and they accumulate in the fatty tissues of most living organisms, leading to concentrations higher than those in the surrounding environment. They also can travel great distances from the source of release through air, water, and migratory animals, often contaminating areas thousands of kilometers away from any known source. Thus, POPs can cause significant adverse human health and environmental effects both near and far.

Women, infants, and children are especially vulnerable to certain effects of POPs. These synthetic chemicals can move easily through the human body, even through a woman’s placental barrier and into the womb, exposing unborn children to health hazards during the most vulnerable stages of development. Evidence links human exposure to specific POPs or classes of POPs with adverse health effects, including cancers, diabetes, immune system changes, learning disorders, and reproductive deficits and sex-linked disorders. The source of the harm caused, however, is not always easily identified.

Recognizing the dangers of POPs, many countries began limiting or banning their production, use, and release, in some cases as early as the 1970s. These efforts culminated in the Stockholm Convention on Persistent Organic Pollutants, that was adopted in May of 2001, and that entered into force in 2004. The more than 160 countries that are Parties to the Convention agreed to eliminate or reduce the release of POPs into the environment.

The Stockholm Convention began with a focus on 12 POPs of immediate concern, often referred to as “the dirty dozen.” These are the pesticides aldrin, chlordane, DDT, dieldrin, endrin, heptachlor, hexachlorobenzene (HCB, also used as an industrial chemical), mirex, and toxaphene; PCBs; and dioxin and furans, which are unintentional byproducts of combustion and industrial processes (as are PCBs and HCB). Unintentional chemical byproducts are among the most potent cancer-causing chemicals known. In 2009, the parties to the Convention added nine new chemicals to the list.

The GEF is the lead institution providing technical and financial assistance to support the efforts of developing countries and countries with economies in transition to implement the Stockholm Convention. The GEF is helping countries create national inventories of POPs and working with these nations to reduce or eliminate the use and release of these chemicals into the environment. The GEF also helps facilitate safe disposal and supports the development of environmentally sound alternative products, practices, and techniques.

Since adoption of the Stockholm Convention the GEF has committed US$496 million to projects in the POPs focal area and leveraged some US$1.5 billion in co-financing, bringing the total value of the GEF POPs portfolio to approximately US$1.6 billion. Just seven years after the Stockholm Convention went into force, the GEF is helping more than 138 countries to inventory their POPs and develop priority interventions to reduce or eliminate releases of these chemicals to the environment and risks to human health. These efforts have also raised awareness and built the capacity of institutions to consider and plan for eliminating not only POPs but other harmful chemicals as well. Through these activities, intragovernmental coordination, stakeholder engagement, and open information have been advanced, particularly towards industry and the private sector.

The first step for signatories to the Stockholm Convention is the preparation of a National Implementation Plan (NIP) to guide the overall effort. By the end of 2008, the GEF had funded or was funding initial planning in 138 countries. More than one hundred countries are now at the stage where their Plan has been endorsed and submitted, or is in the final review and endorsement stage, and 108 of these countries have already submitted their plans to the Convention.

Moldova ratified the Stockholm Convention in 2004 and immediately began preparing its National Implementation Plan. The focus of the plan was identifying the main sources of POPs in the country: the warehouses full of pesticides like the one in Ratus, and power stations that have stored huge amounts of used capacitors and oil contaminated with PCBs. In 2005, the GEF provided US$6.35 million in funding for Moldova in the first NIP implementation project in the GEF portfolio. The project took an integrated approach to deal with the top priority Stockholm Convention issues facing Moldova, addressing PCBs, obsolete pesticides, and strengthening of institutions and regulations for long-term sustainability.

The goals of the GEF project, carried out by the World Bank, were to help Moldova manage and dispose of contaminated stockpiles and to strengthen the regulatory and institutional arrangements for long term control of POPs and other toxic substances. This would be done in line with the requirements of the Stockholm Convention and other related conventions and protocols ratified by Moldova. There would be beneficiaries at the local, regional, and global levels: some 150,000 people live or work in the vicinity of contaminated sites, and managing POPs provides regional and global environmental benefits by reducing pollution of water supplies, preventing pesticides and PCBs entering regional and global food chain through soil contamination, and reducing impacts on land, biodiversity, and waters.

This sort of ambitious undertaking is complex and there are bound to be surprises. In late 2006, for example, as work began on the removal and destruction of POP stockpiles at the Vulcanesti power station in Moldova, engineers had an unwelcome surprise. The plan was to incinerate 50 tons of contaminated soil from the station. But it turned out that the site had more than 3,000 tons of contaminated soil. The contaminated soil was buried in enormous cofferdams constructed at the site. Because of the intervention, things went more smoothly after that. Over the next ten months, another dozen power stations were dismantled and about 19,000 capacitors, with a total weight of 950 tons, were destroyed.

The evacuation of obsolete and prohibited pesticides began in early 2007 at the central store house in Ratus. Nationwide, the project enabled the environmentally sound destruction of nearly 1,300 tons of obsolete pesticides, and over 950 tons of PCB containing equipment (approximately 19,000 capacitors) — about 80 percent of the PCB contaminated electrical equipment in the country. The project identified hotspots including more than 1,500 old and abandoned warehouses and pesticide mixing or preparation sites and 16 PCB contaminated sites. The effort also strengthened the country’s legislative and regulatory framework, which sets the stage for a modern chemical management system, and increased public awareness about health and environmental hazards from POPs.

These actions resulted in substantial local and global environmental and human health benefits. The risk of exposure to dangerous chemicals has been significantly reduced or eliminated. Improvements to transboundary and global water quality is also ensured through the elimination and better management of these substances. Prior to the project, what little legislation existed on chemicals and hazardous waste was woefully inadequate. Since then, a total of 15 draft laws and regulations have been completed under the Project.

Once enacted, these laws and regulations will form the legal foundation for a modern regulatory system for the management and control of POPs and other toxic chemicals and wastes in Moldova.

The involvement of various levels of government, local communities and civil society in the project helped to generate strong support for regulatory reform and capacity building for POPs management in the country. For example, Moldova’s Deputy Minister of Agriculture, Anatolie Spivacenco, stated that the project had led to adoption in Parliament of legislation regulating import, storage, and use of pesticides. The head of the Environmental Movement of Moldova, Alecu Renitsa, noted that the project had allowed thousands of tons of poisons stockpiled during the Soviet era to be destroyed, and had benefitted the communities, the country, and the environment as a whole. Projects operating in one country, or even in one city or one village, like Ratus, but which have far broader impact, are a hallmark of the GEF and one of its defining principles: Limited scale does not necessarily mean limited significance.