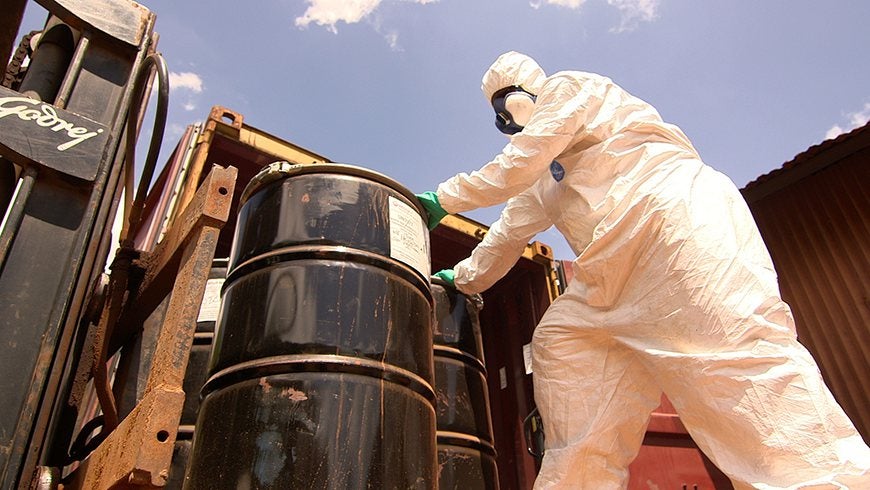 The Basel, Rotterdam and Stockholm Conventions share the common objective of protecting human health and the environment from hazardous chemicals and wastes. All three Conventions made good progress on their stated targets of reducing dependence on toxic substances and promoting ecologically sound alternatives to pest control, paving the way towards a safer world.

May 5, Geneva – Significant steps were agreed upon by parties to the Basel, Rotterdam, and Stockholm Conventions (BRS), as the 2017 Triple COPs drew to a close in Geneva this week. Hosted under the headline, “A future detoxified: sound management of chemicals and waste,” participants reached consensus over a range of issues at the largest ever meeting of the Conventions to-date, attended by around 1,300 participants from more than 170 countries. Eighty ministers took part in high-level talks on the final days of the two-week-long event, which began on April 24.

The Basel, Rotterdam and Stockholm Conventions share the common objective of protecting human health and the environment from hazardous chemicals and wastes. All three Conventions made good progress on their stated targets of reducing dependence on toxic substances and promoting ecologically sound alternatives to pest control, paving the way towards a safer world. “We have seen a surge in positive commitments from governments. The relevance and importance of the BRS Conventions is therefore central to achieving sustainable development, the eradication of poverty and a peaceful and fair world. The sustainable management of chemicals and waste must be met, in order for our health and that of our children to be protected, wherever we live, and whatever our job, whatever our gender, nationality or income,” said UNEP’s Executive Secretary of the three Conventions, Rolph Payet.

The Basel Convention agreed a number of important decisions including the establishment of a new public-private Partnership on Household Waste, to assist countries deal with this issue of growing concern, and gave a mandate to begin tackling marine litter, a key challenge of our time.

By consensus, the Rotterdam Convention (RC) added four more chemicals and pesticides to Annex III. These included the two pesticides carbofuran and trichlorfon, and two industrial chemicals short-chain chlorinated paraffins (SCCPs) – traces of which have been found in air, waterways and sediments – and tributyltin (TBT). The addition of these highly toxic substances brings the total number of chemicals listed under the RC to fifty. No agreement was reached, however, on chrysotile asbestos and the pesticide formulation paraquat dichloride, although many Parties expressed their willingness to do so in order to ensure the best information exchange on these hazardous chemicals. Listing does not constitute a ban, but does however enable Parties to make informed decisions on future imports of these chemicals, based on a structured information exchange, also called the Prior Informed Consent (PIC) Procedure.

“It is clear that agriculture in 2017 and beyond must produce more, while at the same time protecting and enhancing the underlying natural resources on which it is based. The need for more varied, specialized and innovative approaches, that draw on traditional knowledge and advances in science and technology will only be addressed through greater collaboration and cooperation at all levels,” said FAO’s Executive Secretary of the Rotterdam Convention (RC), William Murray. Achieving global food security and improved livelihoods for all requires a sustainable approach to the intensification of agricultural production. Healthy soil, clean water supplies and biologically diverse ecosystems are essential components in building a detoxified future.

The Stockholm Convention succeeded in listing all of the Persistent Organic Pollutants (POPs) which had been recommended, namely decaBDE, short-chain chlorinated paraffins (SCCPs) and hexachlorobutadiene (HCBDE) into Annexes A, A and C respectively. In listing, these substances will now be reduced and eliminated, for the benefit of current and future generations.

The safe management of chemicals and wastes are essential for the implementation of the UN’s Sustainable Development Goals (SDGs) on poverty reduction, health, gender, water, cities, oceans, food and sustainable consumption and production.

The role of the private sector was prominent throughout, including at the first ever Technology Fair which showcased solutions for implementing the three conventions. Parties renewed their commitment to work together, enhance efficient implementation of the conventions and strengthen synergies for a detoxified future.

For technical information on the Rotterdam Convention: Christine Fuell (+39 06 5705 3765) christine.fuell@fao.org

Notes to editors on the listed chemicals:

Newly-listed under the Rotterdam Convention

Carbofuran: an insecticide with trade name Furadan used to control soil insects in fruit and vegetable production, with negative impacts upon the environment including on birds, small mammals, and bees.

Trichlorfon: an insectide or pesticide with trade name Cekufon 80 SP in Europe, Dipterex in Brazil and others, used on fruits and vegetables causing acute neurotoxic and carcinogenic effects and impacts on human reproduction and the endocrine system.

Short-chain chlorinated paraffins (SCCPs): an industrial chemical with numerous trade names including Chlorowax, A70 (wax) and Chlorofo, used as a softener in paints, plastics fillers and coatings and as a flame inhibitor in rubber, plastics and textiles - traces of which have been found in air, waterways and sediments posing particular risks to soil and water-dwelling organisms.

Tributyltin compounds (TBT): a pesticide/industrial chemical with trade name Biomet and Intersmooth, used most commonly in anti-fouling paints for ship hulls, and as biocide in wood preservatives

Newly-listed under the Stockholm Convention

Decabromodiphenyl ether (commercial mixture, c-DecaBDE): an intentionally produced chemical used an additive flame retardant including in plastics, textiles, adhesives, sealants, coatings and inks. C-decaBDE containing plastics are used in electrical and electronic equipment, wires and cables, pipes and carpets, transported over long-range and with significant adverse human health and environmental effects, including adverse effects to reproductive health and output in a number of species as well as developmental and neurotoxic effects, and endocrine disruption.

Short-chain chlorinated paraffins (SCCPs): see above as per Rotterdam Convention.