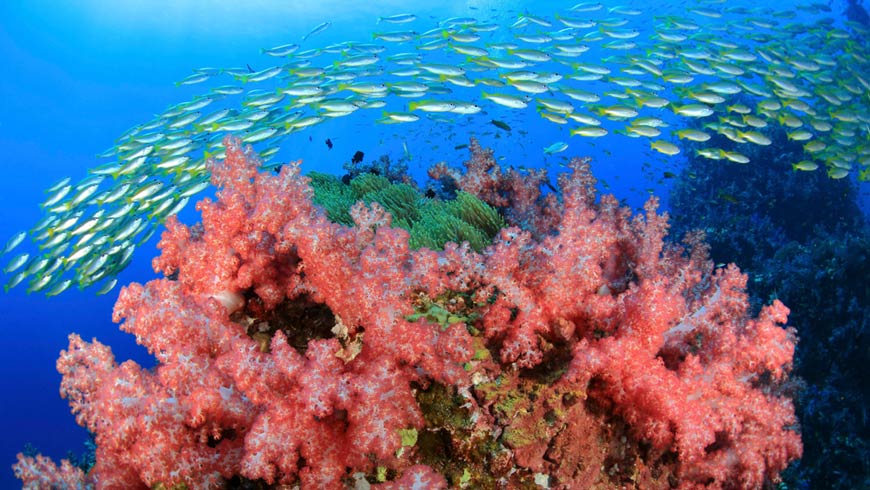 “Recognizing the critical need for global action to ensure the sustainability of our oceans, the GEF has provided tremendous support to ocean governance,” says Naoko Ishii, GEF CEO and Chairperson. “GEF initiatives have enhanced global and regional cooperation and led to improved ecosystem health, services and human wellbeing through stronger governance at regional, national and local levels. These projects apply an integrated cross sectoral approach while engaging the private sector, non-governmental organizations and multilateral institutions.”

Only a land-based species could have called this planet Earth, since more than 70% of it is covered by sea. All life originated on the oceans and still depends on them. They regulate the climate, absorb much of the carbon that humanity emits, and produce the main source of protein for over three billion people. The ecosystem goods and services they provide are estimated to be worth US $12 trillion.

Yet increasingly they are under threat. 90% of the world's fisheries are either fully or over-exploited. Eight million tons of plastics enter the sea each year, reaching the most remote parts of the oceans and contaminating a quarter of all seafood. 80% of the wastewater collected worldwide is discharged without treatment, damaging health and biodiversity and creating “dead zones” in which animal life suffocates.

Toxic pollutants build up in the waters: toxic algal blooms flourish as a result of nutrient-rich waste. Carbon emissions melt sea ice and acidify seawater. Habitat loss takes a heavy toll. And the degradation has been getting worse.

“Recognizing the critical need for global action to ensure the sustainability of our oceans, the GEF has provided tremendous support to ocean governance,” says Naoko Ishii, GEF CEO and Chairperson. “GEF initiatives have enhanced global and regional cooperation and led to improved ecosystem health, services and human wellbeing through stronger governance at regional, national and local levels. These projects apply an integrated cross sectoral approach while engaging the private sector, non-governmental organizations and multilateral institutions.”

The Global Environment Facility (GEF) has been working for decades to turn this tide of destruction. Now, with its support, countries all over the world are working together to safeguard our coasts and oceans.

Fourteen of them, for example, work together in Partnerships in Environmental Management for the Seas of East Asia (PEMSEA), which this year celebrates its 25th Anniversary. It started as a GEF-funded project, but has since evolved into a regional intergovernmental mechanism, including all the countries of Southeast Asia, together with China, Japan and both North and South Korea, and encompassing some seven million square kilometres of shared sea, bordered by some 235,000 km of coastline. Eleven of them have signed up to a shared strategy – the Sustainable Development Strategy for the Seas of East Asia.

“PEMSEA's mission is to foster and sustain health and resilience in oceans, coasts and economies throughout the seas of east Asia” says Ryan Whisnant, its Director of Strategic Initiatives. “It works very closely with the governments of the region, but the work really happens on the ground at local sites, in what is a set of integrated coastal management (ICM) sites across the region”

ICM, he explains, “recognises the fact that you can't look at any one sector”, focusing, for example, just on pollution, sustainable fisheries or sustainable tourism - “but that there are relationships and interlinkages among all of them”. Similarly, he goes on, it involves all stakeholders – including local governments, businesses, community organisations and NGOs – working together to “build the capacity to manage healthy coastal areas”.

So far, he adds, “PEMSEA has been some part of securing that more than 17% of the entire region's coastline managed under some form of ICM, making it highly likely that the contracting countries will reach the agreed target of 25% of the coast of the East Asian Region being under ICM by 2021”

Nancy Bermas, PEMSEA's Senior Country Program Manager, tells, for example, how it works with universities, the private sector and national and local government in the Philippines, in implementing the sustainable development of the province of Bataan, on Manila Bay as a long-term local ICM framework. Victor Ubaldo, the province's ICM Program Director, describes how its government, has co-operated with official national agencies, businesses and “peoples organisations” to replant mangroves.

Ronnie Baldera and Benito Villaneuva, mangrove caretakers, testify that this has reduced the impact of waves on the shore. And Jun Hernandez, a fishers' community organiser, adds that restoring mangroves, together with building artificial reefs and implementing the ICM programme as a whole, has increased fish populations.

Much of it began, says Jose Enrique Garcia, a Congressman and former mayor of Balanga, the province's capital, with a 'coastal clean-up day', which “jumpstarted our determination to come up with a feasible, practical, sustainable coastal programme for the city.” This resulted, for example, in an area that was going to be developed as a beach resort, instead being preserved as a wetland park rich in mangroves and birds.

He continues: “People now recognise Balanga as a place where sustainable industry, such as our dried fish processing, now thrives. If you look at the commercial side, we have grown by more than 100% over the past few years, but that is complemented by the growth also of our environmental protection activities.”

Meanwhile, “all the other municipalities in the province of Bataan have come up with their own programmes to help the environment, most especially in the clean-up of Manila Bay.”

In yet another development, the GEF was instrumental in setting up the pioneering Meloy Fund for Sustainable Community Fisheries, which provides debt and equity financing for businesses that have a positive impact on coastal fisheries in Indonesia and the Philippines.

Its first beneficiary is Meliomar, a sustainable Filipino seafood producer, which gets supplies from about 900 fishers in small-scale communities. With Meloy's funds, says Christian Schmidradner, its General Manager, “we will be able to reach out to two thousand fishermen and improve their lives”.

Manuel Bueno Vera, Senior Director of Rare – the global conservation organisation that owns the Meloy Fund - says that Meliomar is important because it has “shown the way” to other companies that “you can build a good business” out of sustainable production. “It is helping to show how the private sector can be part of a solution that will essentially have a watershed impact on these coastal fisheries”.

The Fund, he adds, “seeks to generate financial returns for its investors, and environmental and social returns as well.” and would not exist but for the GEF's support. “Essentially the GEF was the first organisation to really believe in the concept of providing private sector financing to small scale fisheries, to step forward and really support the Meloy Fund. I think it has been particularly visionary, innovative and creative in its approach.”

On the world stage, meanwhile, the GEF last year endorsed a US $2 million project - with UN Environment, Ocean Conservancy and the Ellen MacArthur Foundation – to build a global alliance across the entire plastic value chain.

The New Plastic Economy Initiative – which includes major companies that produce, process and use plastics, as well as governments – aims to “build momentum towards a plastics system that works”, including seeking out solutions to managing waste and setting up a joint investment fund in the Asia-Pacific Economic Cooperation region.

“The diversity of the GEF investment portfolio in the marine and ocean space, is a testament to fact that transforming current ocean management practices will only be impactful if we pull on our collective strengths and vision to succeed,” says Christian Severin, GEF International Waters Focal Area Coordinator. “This unique mix of ingenuity from local entrepreneurs, coupled with national and regional policies and ministerial endorsed action-oriented frameworks, lays the foundation for the long-term processes needed for triggering sustainable management of the shared ocean and marine resources and ecosystem services”.

And the GEF will continue to promote the Blue Economy, which identifies the oceans as areas for sustainable development, including through tourism, fisheries and aquaculture, extractive industries, renewable energy production, coastal development and marine transport. It will fund collective management of coastal and marine systems, and implementation of the full range of integrated ocean policies, legal and institutional reforms.

Published for Earth Day 2018, this article draws on interviews in the GEF film Our Global Commons: Protecting Coasts and Oceans.

Partnerships in Environmental Management for the Seas of East Asia (PEMSEA)