BONN, Germany, 20 February 2011 – Eleven African countries along the southern border of the Sahara Desert joined today to invest in an ambitious ecological buffer zone to help shield productive land from the ravages of the desert and preserve Lake Chad for future generations. 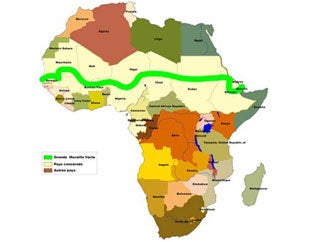 Known as the ‘Great Green Wall’ for the Sahara and Sahel Initiative (GGWSSI) and Lake Chad, country leaders said the joint venture will employ a mosaic of approaches to manage natural resources over a 15 km wide and 7,775 km stretch from Senegal in the west to Djibouti in the east.

Bilateral and multilateral donors, international financial institutions and other global organizations also participated in the discussions co-hosted by the United Nations Convention to Combat Desertification (UNCCD) and the Global Environment Facility (GEF).

The Global Environment Facility expressed interest in supporting the proposed investment
possibilities of what could be up to US$115 million through its various financing windows –
including the Least Developed Countries Fund, and other resources within the GEF that
encourage sustainable development focal areas on biological diversity, sustainable land
management and climate change. Other development partners also made pledges in support
of the proposed investments which could ultimately reach US$3 billion for sustainable
development in these countries.

The announcement followed two days of consultations among environment ministers and other stakeholders from Burkina Faso, Chad, Djibouti, Eritrea, Ethiopia, Mali, Mauritania, Niger, Nigeria, Senegal and the Sudan on how to prioritize financing for a program still currently in a design stage. The preservation of a threatened Lake Chad was particularly emphasized for support under the GEF’s international waters investment portfolio, officials said. Many of the affected countries are among the least developed in the world and combating desertification and land degradation has been a major priority area since the Sahelian drought of 1972-1984 that resulted in the loss of nearly 100,000 lives.

In remarks before the ministers, Mrs. Monique Barbut, chief executive officer and chairperson of the GEF stressed that the proposals are "not just about planting trees or saving livestock. Rather, it is about preserving resources in a manner that will assure countries can enjoy a stable and sustainable future.”

Barbut added that an important step forward in the process is to establish a sound framework whereby projects are identified on the basis of solid criteria that correspond to national strategies and are led by organizations that have the expertise to deliver solid outcomes. With
this in mind “countries can work towards this collective interest and open positive perspectives, rather than run the risk of conflict due to the mismanagement of natural resources.”

Mr. Luc Gnacadja, Executive Secretary of the UNCCD, said the investment by the GEF “will have a catalytic effect in enabling the GGWSSI countries to mobilize the additional resources they need at the regional and international levels.” He said “the GGWSSI fits very well with the implementation of the 10-year strategic plan and framework for the Implementation of the Convention (2008-2018).”

“The initiative has many merits, such as the capitalization of best practices and integration in national priorities as well as fostering synergies and sub-regional coordination, which could be replicated in other regions affected by desertification land degradation and drought,” Gnacadja said in his closing remarks.

The Initiative is expected to lead to the sustainable management of land, water and vegetation
on up to 2 million hectares of croplands, rangelands, and dryland forest ecosystems per country, protection of threatened dryland biodiversity, and the sequestering of 0.5 to 3.1 million tons of carbon per year.

The vision of a green “wall” was originally conceived by the former President of the Federal Republic of Nigeria, Chief Olusegun Obasanjo. Through efforts of several other leaders in the region, the vision has been embraced by the Africa Union which adopted a Plan of Action in January 2009. In June 2010, all eleven countries signed a convention in Ndjamena, Chad, to create the Great Green Wall Agency and nominate a Secretary to further develop the initiative.

About the Global Environment Facility
The Global Environment Facility (GEF) unites 182 member governments — in partnership with international institutions, nongovernmental organizations, and the private sector providing grants to developing countries and countries with economies in transition, linking local,  national, and global environmental challenges in order to promote sustainable futures for all. Established in 1991, the GEF is today the largest public funder of projects to improve the global environment investing in over 2,700 projects.

About the United Nations Convention to Combat Desertification
Established in 1994, the United Nations Convention to Combat Desertification (UNCCD) is the sole legally binding international agreement linking environment and development issues to the land agenda. The Convention focuses on all the world’s drylands, home to over 2 billion people, 50% of the world’s livestock and accounting for 44% of all cultivated ecosystems. The Convention’s 194 Parties are dedicated to combating land degradation and mitigating the effects of drought in the drylands by improving the living conditions of the affected populations and ecosystems.