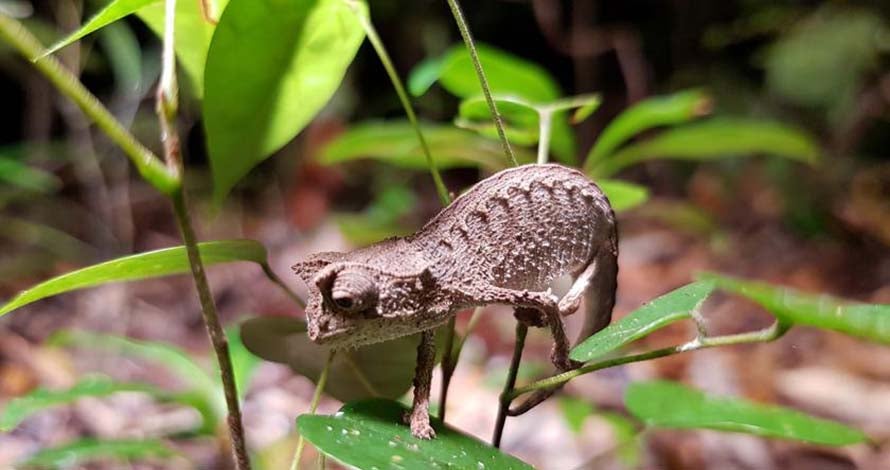 Madagascar’s forests are rich with undiscovered flora and fauna, but for many species time is running out. Photo: UN Environment / Lisa Murray.

It’s nearing midnight, when our guide, Andry, darts into the undergrowth. In the velvet dark of the forest, lit only by the sharp stabs of our torches and the gentle glow of the waning moon filtering through the canopy, it’s hard to see what the excitement is all about until he crouches down, pointing. “Chameleon,” he says, barely louder than a whisper.

Only four centimetres long, and the mottled light brown of a fallen leaf, it’s only the deep green of a seedling pushing through the leaf litter beside it that lets us see it—tiny and immobile except for a single eye swivelling back to observe us.

She might not be much to look at compared to her brightly coloured cousins, but this tiny female has a surprise for us. She’s a new species, as yet undescribed and only the fourth member of her kind ever sighted. A potent reminder of the mystery and the richness of Madagascar’s landscape.

The 41,000 ha Tsitongambarika forest is one of Madagascar’s few remaining stands of humid lowland forest, a globally unique ecosystem with 80 – 90 per cent of its life made up of endemic species.

But it’s also an ecosystem under threat, ringed by villages comprising over 60,000 people and under pressure from illegal timber exploitation and encroachment by slash-and-burn agriculture and other forms of shifting cultivation.

Tsitongambarika’s unique flora and fauna has led to the forest being named an Alliance for Zero Extinction site, a classification only granted to irreplaceable habitats that are the sole home of one or more endangered or critically endangered species.These key sites are amongst the top priorities if global biodiversity loss is to be halted and reversed.

While four species, the Anosy Mouse Lemur (Microcebus tanosi),  the Red-legged Fire-Millipede (Aphistogoniulus corallipes) land snail Boucardicus simplex, and flowering plant Foetidia delphinensis were responsible for triggering Tsitongambarika’s identification as an Alliance for Zero Extinction site, the true importance of the forest goes far beyond this, and is only now coming to light.

Since the Global Environment Facility and UN Environment-supported Alliance for Zero Extinction project started its work in Tsitongambaraika in 2016, 10 endemic plant species have been discovered by the project team and partners, alongside amphibians, chameleons, snakes and lemurs—all new to science. Andry estimates that the forest is home to well over 60 endemic and endangered species in total, in addition to a wealth of biodiversity yet to be uncovered.

Preserving Tsitongambarika has been a race against time for Andry and his team, with Asity Madagascar working for over 10 years to have the forest granted permanent conservation status by the Government of Madagascar—a milestone now realized under the Alliance for Zero Extinction project.

But much has been lost along the way. As we trek into Tsitongambarika, forest ranger and local villager Monja stops us at a lone tree standing amongst otherwise denuded hills. “This is where the forest reached 50 years ago,” he tells us, as he points out the green line on the horizon that is our target, beyond another three kilometres of scrubby grassland and scorched earth.

“When I was a boy, the forest was dense,” Monja says, “but by the time I reached my twenties, a lot of areas had been ravaged by deforestation. The most shocking thing was the transformation of our village. When whole forests disappear, even firewood for domestic use is hard to find.”

“The worst thing was the difficulty of accessing safe drinking water. Springs dried up, even the water needed to irrigate our rice fields disappeared.”

Today, Monja is one of 263 rangers supported by Asity Madagascar and the Alliance for Zero Extinction project to help manage the forest, guarding against illegal timber exploitation and shifting agriculture.

“Being conscious of the intense destruction of the forests here is one of the reasons that pushed me to take this job,” Monja says. “I’m proud of being a ranger. I was appointed by the community and not only is it a prestigious job, it brings me closer to nature.”

The road to recovery

Conservation is a complex game in a country like Madagascar, where a fragile political climate, widespread poverty and an ongoing race for natural resources all make community backing essential to successfully protecting the island’s remaining biodiversity.

Alongside working with community rangers and associations to manage the forest, the project team have given local people a stake in managing their natural resources and introduced sustainable livelihood activities like vegetable farming and beekeeping that help communities thrive without threatening Tsitongambarika’s flora and fauna—and the ecosystem services they provide.

Florent, Monja’s neighbour from Enato village on the fringe of the forest, describes himself as a former “champion of slash-and-burn”. Now though, with support from the project, Florent has turned to beekeeping to supplement the rice farming that supports his family of nine.

“My wife is happy. Thanks to the income from beekeeping, she can buy rice and other crops, and the extra income can be saved for the future. I can expand the livelihood of my family without destroying the forest.”

Florent is one of 1,640 people who have taken up new livelihood activities since the project began, reducing pressure on the forest and opening the way to a sustainable future for both Tsitongambarika and the region’s residents.

Keeping up the fight

Just two years into its three-year lifespan, the Alliance for Zero Extinction project has had a transformative effect on local villagers’ relationship with the forest, rebuilding a sense of ownership and a respect for the balance between people and nature.

But, despite this progress, Tsitongambarika’s future is far from secure. With rich bauxite and mica deposits in the region, pressure remains to explore potential new mining sites surrounding the forest, while political instability poses a continuing threat to maintaining the progress that has been made so far.

“If we walked away now, the forest could be lost. It could be gone in ten years,” Andry says, citing the extraordinary toll taken on the nation’s protected areas when enforcement broke down following the political crisis of 2009.

“Conservation depends on local people, but they need to be supported for change to be sustainable.”

For now though, in Enato and villages around Tsitongambarika, the benefits are clear, and the will is strong.

“My greatest dream is to reach old age in order to be able to contribute to the protection of the forest as long as I have strength and health,” Monja says, nodding towards the trees. “The future of the next generations is at stake.”

Madagascar and the GEF