Punta Del Este, Uruguay, 25 May 2010 – The Global Environment Facility (GEF) and the United Nations Environment Programme (UNEP) announced today that they will be major players at the 2010 FIFA World Cup in South Africa with projects to reduce carbon emissions as part of a National Greening Programme. 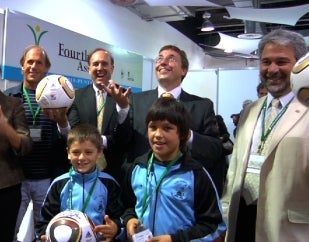 In addition and linked to the UN’s International Year of Biodiversity, another key initiative was launched aimed at assisting the Government of Brazil in conservation efforts.

At the World Cup, GEF has provided US$1million to help retrofit solar panels on public street lights, traffic lights and billboards around the stadia in the six cities hosting the games.

Full details of these and other projects including one involving tourists and fans attending the tournament will be announced next month in South Africa.

GEF is an independent financial organization that provides grants to developing countries and countries with economies in transition for projects related to biodiversity, climate change, international waters, land degradation, the ozone layer, and persistent organic pollutants. UNEP is the implementing agency of the GEF and the only UN agency mandated to keep the global environment under review.

The Assembly is the governing body of the GEF in which representatives of all 180 member countries participate. It meets every three to four years, and is responsible for reviewing and evaluating the GEF's general policies.

Brazil and Biodiversity Information
In Latin America, GEF will support an initiative to integrate the latest science and technology to manage information on biological diversity in Brazil, a country that hosts between 15 percent to 20 percent of the world’s animal and plant life.

The GEF will assist the Government of Brazil in making the biodiversity information contained in the country’s biological collection available online for free through the Brazilian Biodiversity Information System (SIBBr).

With streamlined access to this kind of information, key decision makers and stakeholders will be able to integrate biodiversity conservation and sustainable-use objectives into their operations.

UN Under-Secretary General and UNEP Executive Director, Achim Steiner said: “These are just some of the wide-ranging projects funded by the GEF and implemented by UNEP, the UN Development Programme and the World Bank that since the early 1990s have been catalyzing a response to the world’s environmental challenges”.

“Major sporting events have significant environmental footprints. But are also real opportunities to showcase solutions and build awareness at matches and across the globe via newspapers, radio and TV,” he added.

“These projects are the latest powerful demonstration of our mandate to invest locally for global impact. The GEF makes targeted investments that have a cross-cutting impact on today’s toughest environmental challenges, whether it be climate change, species loss or soil erosion. The GEF is there to help local officials promote sustainable development choices that both protect resources and promote jobs”, said Monique Barbut, CEO of the GEF.

South Africa
In order to formalize the experiences and lessons learned during the 2010 FIFA World Cup, a critical analysis of greening projects will be carried out later in the year to identify what has worked and what were the main challenges and their causes.

Established in 1991, the GEF is today the largest funder of projects to improve the global environment. The GEF has allocated US$8.8 billion, supplemented by more than US$38.7 billion in co-financing, for more than 2,400 projects in more than 165 developing countries and countries with economies in transition. Through its Small Grants Programme (SGP), the GEF has also made more than 10,000 small grants directly to non-governmental and community organizations.

Assembly of the Global Environment Facility (GEF)
The Assembly is the governing body of the GEF in which representatives of all member countries participate. It meets every three to four years, and is responsible for reviewing and evaluating the GEF's general policies, the operation of the GEF, and its membership.

The Assembly is also responsible for considering and approving proposed amendments to the Instrument, the set of rules by which the GEF operates.