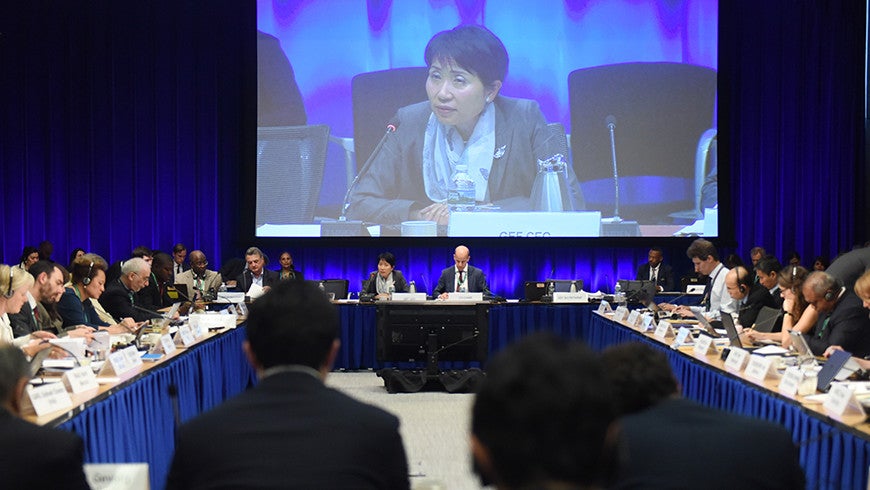 The GEF 52nd council meeting took place from May 22-25, 2017 at the World Bank headquarters in Washington, D.C.

“We had a rich discussion,” Ishii said of the meeting, which approved a $US 246.8 million work program with a strong focus on international waters, chemicals and waste, and support for Small Island Developing States (SIDS) and Least Developed Countries (LDCs).

The Work Program, made up of 30 projects and one programmatic framework, covers a wide range of issues from eliminating persistent organic pollutants in the Maldives to managing threats to marine ecosystems to achieve sustainable “blue growth” in Cape Verde.

With the United Nations Ocean Conference in New York next month, the conservation and sustainable use of the oceans and marine resources is high on the international agenda.  In this regard, the Council approved projects concerned with the management of the Antarctic marine ecosystem, reducing pollution in the East Asian Seas, and the second phase of a fisheries program in West Africa.

The full list of approved projects can be found in the summary of the meeting, which also details decisions taken on the GEF budget and other matters.

The GEF Council meeting included updates on GEF2020, the GEF7 replenishment, relations with civil society, and the ongoing implementation of the GEF integrated approach pilot programs.  There was also a report from the Chair of the Scientific and Technical Advisory Panel (STAP), and the Independent Evaluation Office (IEO) presented its Semi-Annual Evaluation Report.

Building on last week’s positive news of the triggering into force of the Minamata Convention on Mercury, GEF support for the environmental conventions came up in various discussions.

A special session brought together the GEF CEO with the heads of some of the multilateral environment agreements it serves, including Monique Barbut, UN Convention to Combat Desertification, Cristiana Pașca Palmer, UN Convention on Biological Diversity, Rolph Payet, Basel, Rotterdam, and Stockholm Conventions and Jacob Duer from the Interim Secretariat of the Minamata Convention on Mercury.

Back-to-back with the GEF Council meeting, the 22nd Meeting of the Least Developed Countries Fund (LDCF) and the Special Climate Change Fund (SCCF) Council took place.  Over the last year, $US156 million has been approved for new adaptation projects.  The projects will help build the resilience of the world’s poorest, including building resilient health systems in the Pacific Islands, and post-hurricane Matthew reconstruction in Haiti. New projects will also increase resilience in El Salvador and Jamaica, and restore 2,000 hectares of forests and diversify livelihoods in Lebanon.