The GEF-CSO Network: With cooperation, nothing is impossible 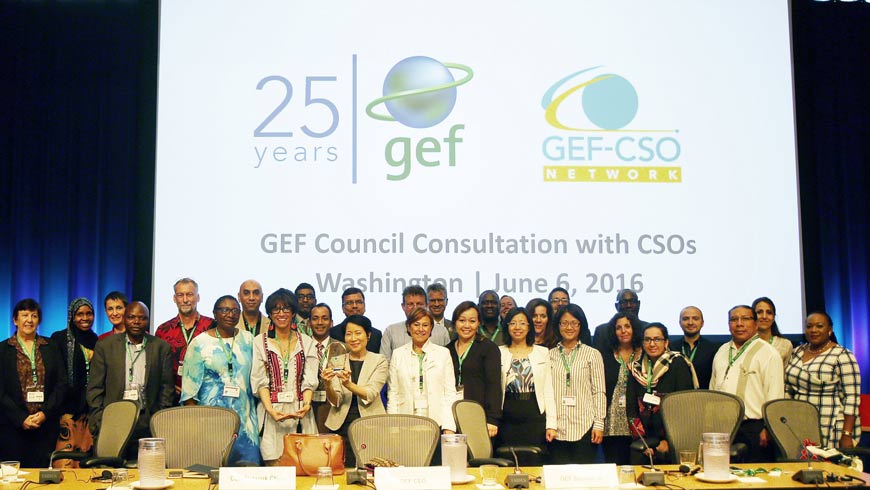 We must get communities and stakeholders involved: as the "street level" of government, cities have no choice but to act. Without such cooperation we would face unknown consequences.

Civil Society Organizations (CSOs) have been participating in the GEF's operations since its inception, and the network connecting them together has more than 500 active members in over 120 countries. The GEF-CSO Network was established in May 1995 and has been a key partner of the GEF since then, contributing to policy formulation and advocating strong public participation in all stages of implementing programmes. Among other initiatives, the Network supported the development of GEF Principles and Guidelines for Engagement with Indigenous Peoples, promoting inclusion and respect of their rights in projects, and contributed to the policy on minimum standards for environmental and social safeguards, gender mainstreaming, the Gender Action Plan and other areas. The Network also successfully pushed for a review of the 1996 GEF Public Involvement Policy (PIP), resulting in the development of guidelines for implementing it and in the establishment of the PIP Working Group in 2015.

Since 1996, the GEF-CSO Network has collaborated with the GEF Secretariat to organize CSO consultations twice a year before GEF Council meetings - and has helped organize a CSO Forum during the GEF Assembly every four years. It also helps to facilitate regional CSO meetings in association with GEF Expanded Constituency Workshops.

After actively contributing to the GEF's successful Fifth and Sixth Replenishments, the Network now looks forward to working closely with it in examining what will be needed to achieve an ambitious Seventh one and at further fine-tuning of the organisation's unique role in safeguarding the global environment, including what is needed to implement the Conventions it supports..
We congratulate the GEF family on this 25th anniversary. The last quarter of a century has been a journey in safeguarding the environment, one filled with many successes and lessons learnt.

The state of the environment has become serious. It is getting harder and wilder for everyone, with daily disasters. Environmental degradation is not a theoretical future risk, but the very real present for our communities. No-one is totally safe either in developed or developing countries.

Cooperative innovative action has thus became essential. Governments and international organizations cannot solve environmental problems alone. We must get communities and stakeholders involved: as the "street level" of government, cities have no choice but to act. Without such cooperation we would face unknown consequences. So we look forward to collaborative efforts to achieving the GEF 2020 Strategy.