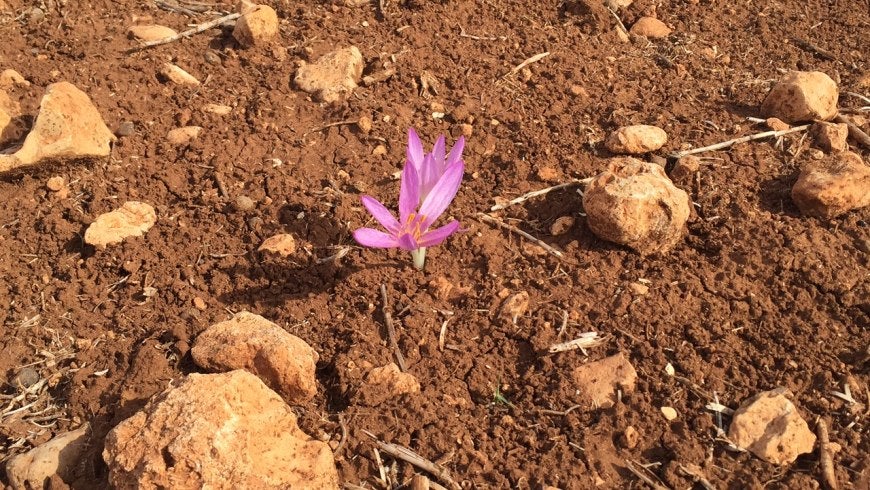 A flower grows in the Moroccan soil

In the region around Settat, a city between Marrakesh and Casablanca, the Global Environment Facility (GEF) financed the purchase of direct seeding machines so that small farmers could seed without laboring the soil. In a region impacted by a warming climate, this improves the soil structure so it can retain more rainfall in the root zone.

Small-scale farmers have seen their yield raise by 50 percent in wet years and by 100 percent in dry years compared to traditional seeding. Based on these results, the government designed a nationwide subsidy that reduces the cost of the direct seeding machines to that of traditional seeding machines so as to allow small-scale farmers to access the technology.

The GEF CEO, Naoko Ishii, along with GEF council members and media representatives visited the adaptation project which is financed by the GEF’s Special Climate Change Fund (SCCF), a fund that was conceived at the UNFCCC COP7 in Morocco in 2001. The field visit took place during a break in the COP22 negotiations in Marrakesh.

Thanking the donors, government, partners and the farmers themselves, Naoko Ishii, GEF CEO and Chairperson, said she was “proud to see what we’ve done”.   She noted that “the investment has produced tangible results that has spread to other parts of the country.”

The impact of the GEF SCCF seed funding is one of many successful adaptation efforts in Morocco piloted by the project, Integrating Climate Change into the Implementation of the Plan Maroc Vert (PICCPMV).  Part of an increased awareness of the Moroccan Government to address adaptation needs, it is funded with a GEF grant of $4.3 million and is implemented by the World Bank.  The project was designed to support tangible adaptation interventions such as goods and services aimed at benefitting small-scale farmers in five target regions, and to develop capacities of public and private institutions to integrate climate change adaptation efforts in such projects.

Oussama El Gharras, an agricultural engineer at the National Institute for Agronomic Research (Institut National de Recherche Agronomique – INRA) remarked during the visit, “This project was primarily designed to address the negative effects of climate change and to increase the resilience among our hard hit agricultural communities to adapt to the new reality. But it has gone far beyond that: not only has it led to a switch from traditional farming methods to more advanced ones including the use of state of the art technology, it has also shown that the approach can be replicated throughout Morocco and therefore was the beginning of a large scale transformation of agricultural practices that have the power to deal with the changing climate, namely increased droughts and degradation of soils.”

In Morocco, and elsewhere, the impact of rising temperatures due to climate change can be seen through more extreme weather patterns, diminishing water resources and crop yields.  With the poorest often most at risk, adaptation to climate change is essential in order to combat its adverse effects on the most vulnerable.

Cereal production that relies on rainfall varies greatly depending on the rainfall pattern. In 2015-16, there was a delay in the rains which resulted in a 70 percent reduction in nationwide cereal production for Morocco compared to the previous year.  This led to the need to import 4 million tons of grains. At the same time, irrigating cereals is not an option, due to scarce water resources. The challenge is to use rain better to increase and stabilize cereal production.