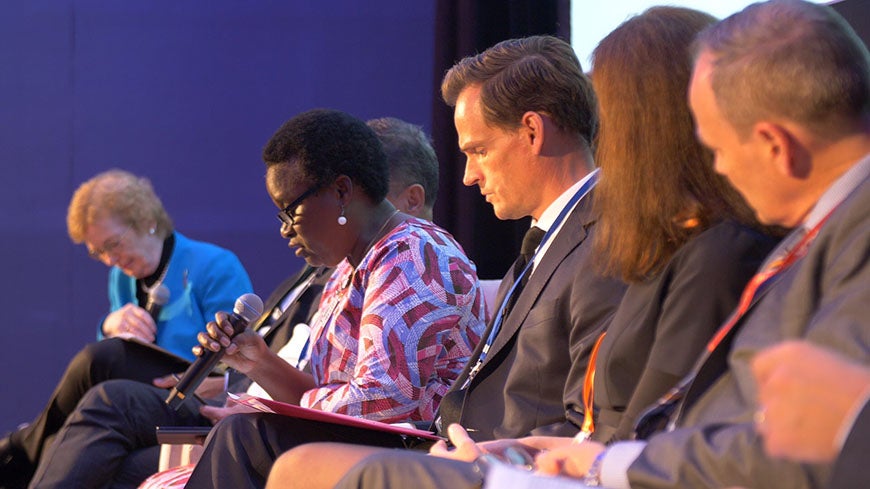 The Least Developed Countries Fund provides adaptation support where it is most urgently needed, notably the world’s poorest countries where vulnerabilities to climate change are so high. The new LDCF financing will enable the GEF to respond to requests for grant support for projects that can build resilience against climate change variability and disasters, which can threaten food supplies, housing, transportation, energy, water, and other vital areas.

Following a high-level meeting convened by the GEF during UN Climate Week in New York, the governments of Denmark, Germany, the Netherlands, and Sweden pledged a combined total of $160 million in new funding for the LDCF, and the United Kingdom committed to exploring new and additional support to the fund. The Government of Canada also made a commitment of $7.5 million to the LDCF at last month’s G7 Summit in Biarritz, France.

The LDCF financing will be distributed as grants to urgently safeguard agriculture, improve disaster readiness, and protect community livelihoods in the face of growing threats from storms, droughts, and floods in least developed countries.

Naoko Ishii, CEO and Chairperson of the GEF, welcomed the commitment of both donor and developing countries to quickly scale up climate action. “It is heartening to see our GEF partners coming together to support an urgent scale-up of adaptation action in the world’s poorest countries,” she said.

“As we ramp up our efforts for adaptation through those new commitments, we must be mindful of recommendations in the recently released report from the Global Commission on Adaptation. It calls for revolutions in three areas - understanding, planning and finance - in order to ensure that climate impacts, risks, and solutions are being factored into decision making at all levels,” Ishii stated.

The Least Developed Countries Fund provides adaptation support where it is most urgently needed, notably the world’s poorest countries where vulnerabilities to climate change are so high. The new LDCF financing will enable the GEF to respond to requests for grant support for projects that can build resilience against climate change variability and disasters, which can threaten food supplies, housing, transportation, energy, water, and other vital areas.

Maria Flachsbarth, Germany’s Parliamentary Secretary to the Federal Minister of Economic Cooperation and Development, said: “Climate change destroys opportunities for development. Each additional tenth of a degree of global warming dramatically increases the risks and problems on our planet. The Least Developed Countries are particularly hard hit. They are only minor contributors to climate change. That is why the Least Developed Country Fund (LDCF) is a central element of our policies. I am very pleased to be able to announce today that the German government will be making another significant contribution to the Fund in the amount of 50 million euros.”

“The LDCF is the only multilateral fund fully dedicated to climate action in LDCs,” said Kingdom of Bhutan National Environment Commission Secretary and LDC Group Chair Phuntsho Wangdi. “The partnership that the fund embodies is important, as we need a partner that understands and is able to meet the real needs of the LDCs quickly. With LDCF finance, the LDCs are putting in place the building blocks and catalytic support we need to adapt.”

Swedish Director General for International Development Cooperation Johannes Oljelund said: “Sweden recognizes the urgency to step up adaptation finance and provide more predictable funding in the years to come, to counter the enormous adaptation challenge that least developed countries are facing. Sweden is therefore happy to announce that as of 2019, it will provide multi-year funding to the LDCF in the amount of SEK 520 million over four years.”

Rasmus Prehn, Minister for Development Cooperation of Denmark, said: “Protecting those most vulnerable to the impacts of climate change is a global responsibility. Denmark strongly supports the focus of the Least Developed Countries Fund and its strategy of leaving no one behind. Pending parliamentary approval, Denmark therefore plans to contribute an additional $31 million (210 million DKK) to the LDCF in 2020, making Denmark a significant contributor to the fund.”

“Adaptation to climate change is essential to achieving many of the Sustainable Development Goals and leaving no one behind. As recent reports underlined again, investing in adaptation is both necessary and smart. The Least Developed Countries Fund (LDCF) has been an effective mechanism for responding to adaptation needs. Therefore, we decided to increase our contribution to the LDCF with 20 million euros,” said Carola van Rijnsoever, Ambassador for Sustainable Development of The Netherlands.

“The LDCF has been providing support for a broad range of actions leading to climate-resilient development including access to improved water supplies, strengthening infrastructure, and expanding access to improve flood and storm early warning systems,” said Mary Robinson, Chair of the Elders and former President of Ireland, who moderated the meeting in New York and described the fund as a good model for financing climate adaptation priorities. “The livelihoods of so many people in rural communities are dependent on land, and dependent on the kind of support that will facilitate a move to climate-smart agriculture and sustainability. Their life is much more difficult because of the aggregation of impacts of climate change, and they are addressing those the best they can, but they need the support of the fund.”

“We need to act now in order to adapt to the impacts of climate change and to build the resilience of our communities,” said Ethiopia’s Environment, Forest, and Climate Change Commissioner Fekadu Beyene. “The LDCF fund is a crucial resource to help us act on our climate adaptation priorities, which includes resilient agriculture and land use.”

“We firmly believe that any further delay in taking action on climate change would only lead to greater adverse effects,” said Bounkham Vorachit, Vice Minister of Natural Resources and Environment from the Lao People’s Democratic Republic. “Over the past years, LDCF projects have made important contributions to addressing vulnerabilities in rural areas and building robust national adaptation institutions and planning processes that enable alternative and more innovative adaptation actions.”

“It is evident that we need much more action on adaptation,” said Senegal Minister of Environment and Sustainable Development Abdou Karim Sall. “Our national adaptation plans have helped us clearly identify priorities for adaptation action. I am very confident that together we can deal with these adaptation needs.”

“Vanuatu is ranked by the United Nations University as the country most at risk from natural disasters. We are on the front line of climate change, and I am very happy to say we have benefited from the LDCF helping us to adapt to this vulnerability,” said Vanuatu Minister of Foreign Affairs Ralph Regenvanu. “The most important thing is that we need to prepare for these disasters.”

The Least Developed Countries Fund (LDCF) was established based on a 2001 decision from the United Nations Framework on Climate Change (UNFCCC), along with the Special Climate Change Fund (SCCF). Managed by the GEF, the LDCF supports least-developed countries in their efforts to adapt to the effects of climate change. To date, the LDCF has supported 282 projects in least developed countries, with approximately $1.3 billion in grant resources. Its strategy draws on the track record of leaving no one behind; each and every least developed country has received LDCF support for adaptation efforts. The projects supported to date are expected to directly reduce the vulnerability of more than 21 million people.

Investing in Climate Change Adaptation Action through the LDCF