Guarani traditional knowledge helps to preserve the forest and its biodiversity

The forced migration of these communities, originally from Bolivia, Paraguay and the Salta portion of Chaco (Argentina), weakened their social bonds and resulted in the loss of their cultural and social heritage, including the traditional knowledge on how to use using natural resources.

After some years, the Penti Carandai Community gained access to the 515 hectares property of secondary forest, but given the lack of financial resources and reduced traditional knowledge of the community, they were not able to conserve their environment while having a sustainable livelihood.

The area of Palma Sola used to be an important sample of the so called transition forest (piedmont forest) and mountain rainforest that were the habitat of typical forest species such as palo blanco (Calycophyllum multiflorum), palo amarillo (Phyllostilon rhammoides), horco cebil (Pitpadenia excelsa), afata (Cordia trichotoma), quina (Myroxylon peruiferum), lapacho rosado (Tabebuia avellanadae) and yuchan (Ceiba chodatii) and algarrobo (Prosopis sp). This forest ecosystem disappeared due to the expansion of the agricultural border for the cultivation of sugar cane, citrus and grains (soy and beans), leaving only small patches as samples of the original or secondary remainders.

The GEF Small Grants Programme supported a project aimed at preserving the forest and its biodiversity by recovering Guaraní traditional knowledge on the sustainable use of natural resources. The project supported the creation of a comunitary garden where they are producing plants from the same species of trees that are native to the area and replanting them. In addition, the community is producing products out of medicinal plants, wood and fiber. 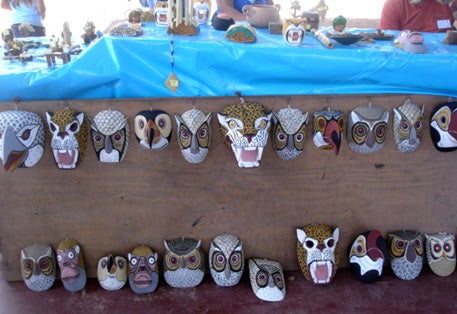 Masks made of yuchan wood

In terms of traditional knowledge and conservation, a group of men was trained in the production of masks that represent local fauna species using wood of forest trees, particularly yuchán. The training was provided by members of other Guaraní communities that still preserve this ancient knowledge. For the dying of the masks the artisans use natural dyes such as clay and soot.

A group of women recovered knowledge and skills for the production of handcraft basketry and hats using the fiber obtained from the leave of the carandai palm tree (Tritrinax campestri), a typical palm from this region and other ecological regions of Argentina. Other women dedicated to the elaboration of typical meals using flour of algarrobo fruits and mistol (Ziziphus mistol), and also to the recognition and use of medicinal herbs.

This project enabled the recovery of knowledge of the Guarani people, not only in relation to the forest that traditionally constituted the living space for the Guaraní people, but also regarding the organization and the relevance of participating in other spaces outside the community. According to Cacique Victor Reyes, this project accompany the “sister communities to walk this path of meeting again with their values and hidden knowledge and recover these for the sake of all, Guaraní and not Guaraní”.