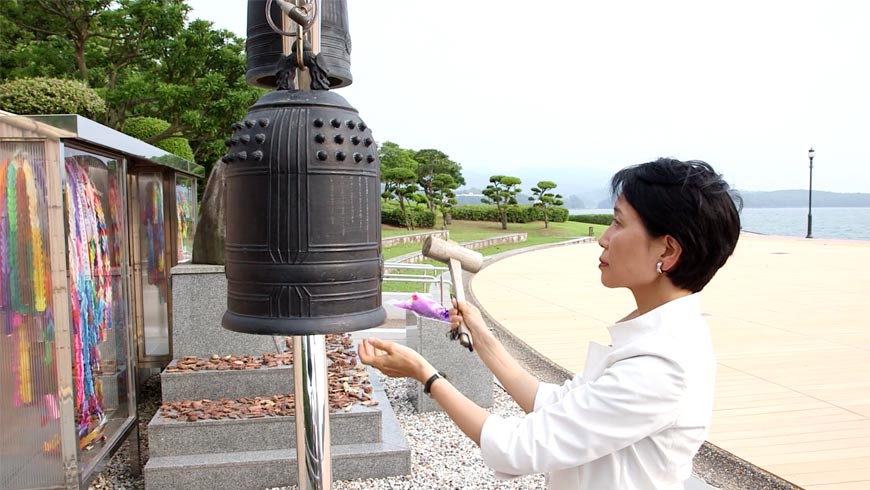 Naoko Ishii honoring the memory of the victims of the mercury poisoning in Minamata, Japan.

Growing up in Japan in the wake of mass mercury poisoning I learned the hard lesson that there is no distance great enough to put between this heavy metal and us. The tragedy unfolded in my country in 1956 after a chemical plant discharged wastewater containing mercury into the bay facing Minamata City. The resulting mercury poisoning took the lives of thousands of people: thousands more are still living with the consequences.

I recently visited the Minamata memorial that honors the victims of that tragedy and spoke to some of the survivors, and the National Institute for Minamata Disease, a medical research facility that studies the consequences of human mercury poisoning, where they took a sample of my hair. It was no surprise to me that they found traces of mercury in it: I know that mercury has no boundaries. It can even travel thousands of miles in the atmosphere before coming back to the earth and becoming part of our food supply.

Because of all of this, I have always associated the name of Minamata with human suffering, environmental degradation and demand for social justice. Yet hope has now been hearteningly added to this grim picture with the creation of the Minamata Convention on Mercury, which is  convening for the first time this week.

This development is a clear sign that the international community is serious about working to prevent similar tragedies from ever happening again. I am particularly proud that the organization I lead, the Global Environment Facility (GEF) has been chosen to be part of the Convention’s financial mechanism, reinforcing its unique role in funding a range of interconnected environmental programs addressing chemical pollution, land degradation, climate change, and threats to biological diversity and water resources. It is a vote of confidence in the work that we have done in the last four years, promoting innovation in the design and scaling up of mercury programs. Our projects in more than 100 countries, are so far expected to reduce mercury contamination by at least 800 tons.

Still, overcoming the challenges ahead of us will be no small feat. The Global Mercury Assessment (2013), carried out by UN Environment, put annual global mercury emissions - from both natural and anthropogenic sources - in the range of 5,000 to 8,000 metric tons per year. Mercury use and emissions are tied to many of our key economic activities, including the production of commodities such as gold, the generation of energy, and the production of plastics and cement, all important parts of the modern life.

Some countries are already committed to reduce the use of mercury and replace it with more sustainable practices, including those participating in the GEF Global Opportunities for Long-term Development GEF GOLD programme.  Artisanal small-scale gold mining is the largest mercury-consuming sector - responsible for 37% of total mercury emissions (UNEP 2013) - and the GEF GOLD program will support miners, governments and the private sector in bringing transformational change. Yet this is not enough.

Mercury contamination is not a problem only for communities living in contaminated areas, but an issue for each of us. When you know that almost every person on the planet has some level of mercury in their tissues; when a mother decides not to consume seafood because she is afraid that the life she carries could be affected by it; when indigenous people that live in remote areas of a tropical forest are found to have dangerously high levels of mercury in their bloodstream – that is when mercury becomes a personal matter.

It’s certainly personal to me as a Japanese national and the head of a global  environmental organization. It is also personal to the thousands of people that work hard to raise awareness on the dangers of mercury, and reduce or halt the release of mercury into the environment.

The Minamata Convention binds us to commitments to make mercury history. It’s now up to us to make it work.

This piece was written in advance of the inagural Conference of the Parties (COP) of the Minamata Convention on Mercury, which is taking place in Geneva, Switzerland from 24-29 September, 2017. More information can be found on the UN Environment Newscentre.