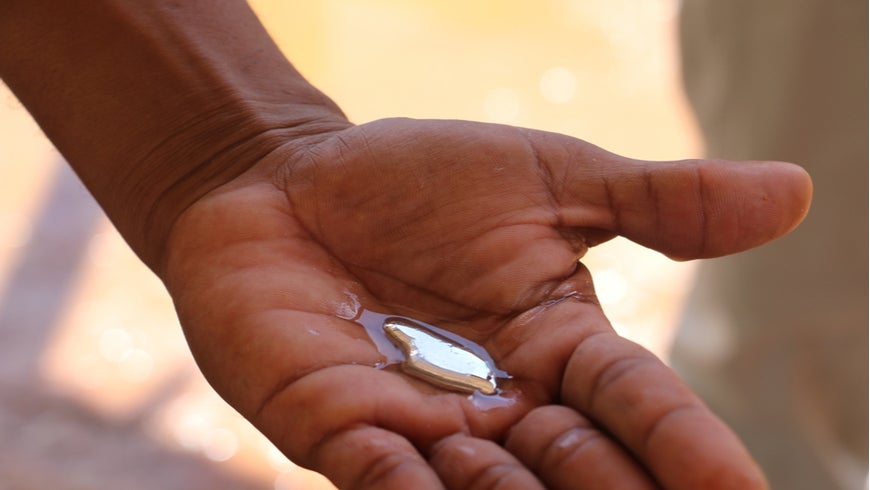 The planetGOLD programme is working to eliminate mercury from the supply chain of gold produced by artisanal and small-scale miners by supporting improvements in these four areas. Photo: Wein-Tirol/Shutterstock

The third meeting of the Conference of the Parties to the Minamata Convention on Mercury (COP3) is taking place from November 25-29 in Geneva, with a focus on ways to protect human health and the environment from releases of mercury related to artisanal and small-scale gold mining.

The Global Environment Facility, as part of the financial mechanism to the Minamata Convention, will present a report in Geneva of mercury-related activities and projects funded since the last COP in 2018. The GEF also held a side event focused on the program “planetGOLD – solutions for the artisanal and small-scale gold mining sector.”

At the opening ceremony, UN Environment Programme Executive Director Inger Andersen emphasized the work already achieved by the 113 Parties to the Convention to respond to mercury pollution and the need to keep moving, adopting the necessary documents for the effective implementation of the Convention.

“Everyone on the planet is exposed to mercury at some level – whether through the food we eat, the air we breathe, or the cosmetics that we use. Only concerted, united action through this Convention and all of its allies can stop this toxic heavy metal endangering human and environmental health,” she stated.

“It is my sincere hope that we will reach universal ratification for the Minamata Convention. However, this alone will not guarantee that we make mercury history. A resolute implementation and the capacities to do so are key for actual change in practice. Moreover, in order to be sure that our convention works well, we will have to check on its effectiveness.” Chardonnens emphasized.

In the same line, the Convention’s most senior representative, Rossana Silva Repetto stressed that “the adoption of the convention is not the end but the beginning, the point of departure of a new time line, the time line that started in 2013 when the international community united and with one voice showed its determination to address the negative effects of mercury through a convention on mercury."

Finally, the President of the COP, David Kapindula, highlighted the challenging agenda of the meeting and the need to make an effort in reaching consensus on key issues that are critical for the long-term success of the treaty. “I hope that you share my concern that we must avoid building a legacy of unresolved issues that will adversely affect our ability to achieve the objective set out in Article 1 of the Convention. And I look forward to your support and cooperation in making this, our third meeting, truly a success," he stated and declared the third meeting of the COP open.

Development of the meeting

At the plenary sessions, the official meeting documents will be discussed for the COP to make decisions on matters such as the framework for evaluating the effectiveness of the Convention, the adoption of technical guidance documents, and the work program and budget of the secretariat for the biennium 2020-2021. The complete list of documents can be found on the COP3 webpage. The main topics that the Parties to the Convention will discuss are:

The meeting’s official activities also include 26 side events and knowledge labs that feature broader issues such as the linkages between chemicals management and biodiversity, chemicals and waste management beyond 2020, and the global community’s efforts to protect human health and the environment from the negative effects of mercury, among others.

The meeting will play a critical role in the future of the Convention, which aims at protecting the human health and the environment from the adverse effects of mercury, a highly toxic heavy metal considered by the World Health Organization as one of the top 10 chemicals of major public health concern.

This piece was adapted from a story by the Minamata Convention.

GEF at the Minamata Convention on Mercury COP3

$180 million investment to tackle the hidden cost of gold