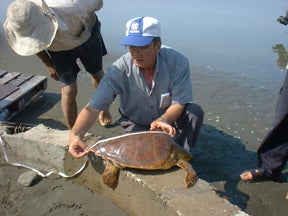 In 2008, a local organization called the Albanian Herpetofauna Society-H.A.S in collaboration with The Mediterranean Association to Save the Sea Turtles-MEDASSET)” started a conservation project in the Drini Bay and Patoku lagoon part of the Patok area in Albania.

The three-year Project called “Monitoring and Conservation of Important Sea Turtle Feeding Grounds in the Patok Area of Albania 2008-2010” aims to contribute to sea turtle and habitat conservation, population dynamics, migratory routes monitoring, capacity building, environmental education and awareness-raising in Albania. In particular, the project directly contributes to the implementation of the Strategic Action Programme for the Conservation of Biological Diversity in the Mediterranean Region (SAP BIO) and of the Action Plan for the Conservation of Mediterranean Marine Turtles (under the United Nations Environment Programme Mediterranean Action Plan (UNEP/MAP) to which Albania is a contracting party. The local area is characterised by five main habitats: a wetland, an inner lagoon, an outer lagoon, a small barrier island and a shallow sea – Gjiri i Drinit.

During the second year of the project 137 sea turtles were tagged and released in collaboration with the local fishing community and a remarkable number of 245 turtles have been tagged since 2008 at Patok in two consecutive projects co-financed by SGP, providing evidence that this is a significant foraging area for loggerhead (Caretta caretta) sea turtles travelling through the Mediterranean.

In addition, the project is also investigating the population of turtles captured as by-catch in local “stavnike” or fish-traps. Sixty six adult and adolescent males have been tagged at Patok, indicating that males may be using the area both as a developmental and foraging habitat.

“This discovery has increased importance due to our presently limited understanding of the distribution and marine ecology of male sea turtles and also because of the threatened impact of global climate change, which may force embryonic sex-ratios of turtles towards female-dominance” says Dr. Michael White, Project Lead Researcher. Moreover, 8.6% of the turtles were found for the second time at Patok, suggesting that Albania may also form part of their migratory route.

Unveiling sea turtle migratory patterns, their feeding areas and the threats they face, is fundamental for designing conservation strategies. The long-term aim of this project is for the Patok area to be recognized as a nationally and regionally important foraging habitat for sea turtles in the Mediterranean and that these endangered species are fully protected under Albanian national law.

In order to further investigate the migration of these mystery travelers, three turtles (two males and one female) were fitted with transmitters on the September 12th 2009 and the first satellite tracking programme of sea turtles in Albania was launched from Patok. “Shpresa” (Hope) has remained within the broader area of Patok, while “Guximtari” (Brave), after spending part of the winter in the Patok area headed north and is now in the Croatian waters near the island of Hvar. The other male, “Patoku”, an international traveler, has covered so far 630.10km and is now in Greek waters just off the island of Corfu, in the Ionian Sea.

Fulfilling its main goal for 2009 to focus on capacity building, the project trained seven local university students as Research Assistants, thus providing the next generation of Albanian scientists the capacity to monitor the sea turtle population of their coastline. The project also offered over 70 Albanian university students the opportunity to attend workshops at Patok during the summer. Additional activities in 2009 included a waste pollution survey in the Patok area and the analysis of DNA samples collected during fieldwork in collaboration with Adnan Menderes University (Turkey). Throughout the project, locals and tourists are informed about the sea turtles’ plight while awareness is also raised through local and national media.

In 2010, launched by the UN as International Year of Biodiversity, the project team will focus on initiating the legislative process, in order to conserve Albania’s fragile biodiversity and protect the endangered sea turtles visiting its shores.