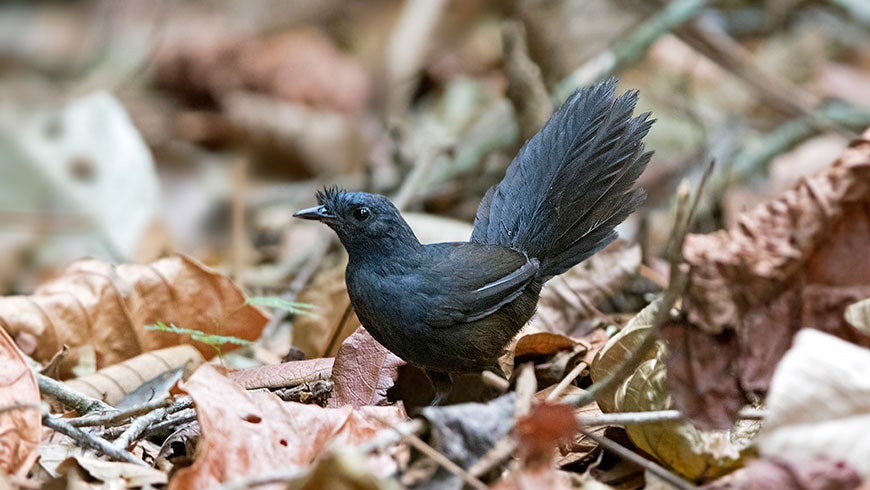 GEF support to help prevent the extinction of rare birds and other endangered species.

On the margins of an international gathering of biodiversity experts, a new initiative has been launched with support from the GEF to help prevent the extinction of rare birds and other endangered species.

As part of the Alliance for Zero Extinction (AZE), BirdLife International, American Bird Conservancy (ABC), IUCN, UNEP, GEF, and the Governments of Brazil, Chile, and Madagascar have teamed up in a new effort to both halt global extinctions and safeguard the habitats in which they live.

The initiative will mobilize $6.7 million to deliver a project entitled “Conserving Earth’s Most Irreplaceable Sites for Endangered Biodiversity.” AZE is a global initiative working to prevent species extinctions by identifying and safeguarding the places where endangered or critically endangered species are restricted to single remaining sites.

“Protecting the last remaining habitats for critically endangered species is a vital strategy for preventing extinctions. The CBD Secretariat welcomes this initiative as a contribution towards global species conservation efforts,” said Braulio Dias, Executive Secretary of the UN Convention for Biological Diversity (CBD).

One of the species to be protected is the Stresemann’s Bristlefront: a long-tailed bird with distinctive forehead bristles that has only 15 individual birds left of its entire species.

The Stresemann’s Bristlefront habitat is a remnant strip of humid forest in a valley at the border of Bahia and Minas Gerais states in Brazil. Rapid deforestation for logging, plantations and cattle ranching, which has devastated the state’s forests, is its biggest threat.

“By focusing on those sites that represent the tip of the iceberg of the extinction crisis, the Alliance for Zero Extinction is a key approach to save species from extinction,” said Gustavo Fonseca, GEF Director of Programs. “These are sites that are the last remnants for entire species. Saving the habitat is saving these fragile species."

The project’s focus will be the creation and improved management effectiveness of protected areas and the improved conservation status of AZE species at five demonstration sites in Brazil, Chile, and Madagascar and at an additional 10 sites globally.

“This initiative is particularly important as it links local conservation action to national and international policy. We are truly honored to be working with the Governments of Brazil, Chile and Madagascar”, said Pepe Clarke, Head of Policy at BirdLife International.

The announcement was made during the 20th meeting of the Subsidiary Body on Scientific, Technical and Technological Advice (SBSTTA) to the CBD that is taking in place in Montreal, Canada from April 25-30, 2016.

Delegates from 196 countries are meeting to address a wide array of topics, including mainstreaming of biodiversity into key production sectors, marine biodiversity, invasive species, threats to pollinators and food production, protected areas and ecosystem restoration. The SBSTTA meeting proceeds the 13th meeting of the Conference of the Parties to the CBD (COP 13) that will take place in Cancun, Mexico from December 4-17, 2016.

Biodiversity conservation is key to achieving the SDGs and maintaining the health of our global commons. The GEF addresses the drivers of biodiversity loss by mainstreaming biodiversity into decision-making of governments and businesses, and strengthening the protected areas system. The GEF has supported the creation of more than 3,300 protected areas, covering an area larger than Brazil, and supporting the conservation of some of the most diverse places on Earth.

In parallel, the GEF has helped broaden the use of natural capital valuation as a means to tackle the underlying drivers of biodiversity loss, and launched a multi-country program on combatting illegal wildlife trade.

Say ‘no’ to extinction: saving Bristly and his fourteen companions, story by BirdLife International.