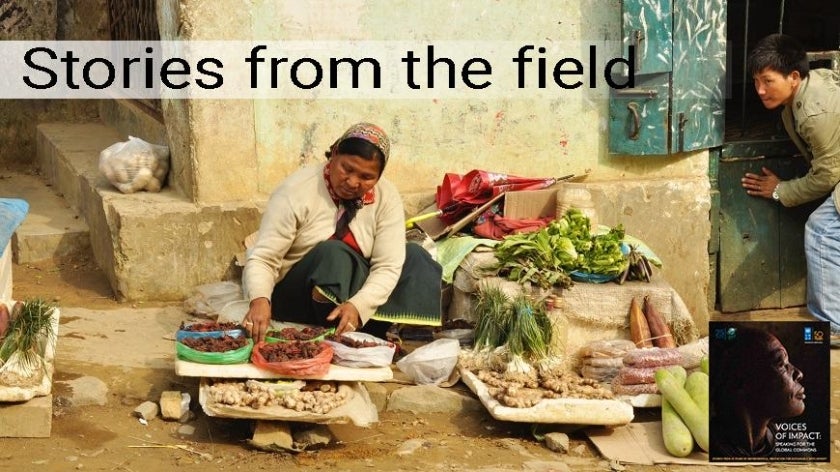 “I was born in Naganimora village and was schooled only as far as the ninth class, before my marriage to a man from Leangyu village was fixed, and I had to move here. In these mountains we have always relied on jhum for our food and most of our income. We clear patches in the forest and then plant a mixture of crops – some of these are wild plants and others are domestic varieties. After a few years, the harvest gets poorer, so we leave the patch to recover and plant a new area. This used to work well and we were able to meet most of our food needs. But, as more people settled here, there was less land, and the soil washed down the slopes. Sometimes we could only produce food for a few months. Also, the government didn’t want us to cut down any more of the forest trees.

About five years ago a project started up here to work with jhum farmers. Through this we set up a Self-Help Group, and I was elected as the chairperson. We were trained on many different things that have improved our standard of living – not only for our Group, but for everyone in this village.

My thoughts about the natural environment have been greatly changed. I did not know much about things like conservation, or biodiversity or climate change – or how this could help us feed ourselves! But we have been made aware now of these issues, and we have learnt to care for the soil, save water and leave standing trees in our fields. Since we have been using these methods, I can see visible changes in the surrounding environment. Our crop yields are better and we have increased income through sale of jhum crops.

Since we have been involved in Land Use Committees, we take part in planning how the land is used. This has involved us in planning where we do and don’t plant and how we plant. We have marked some areas of the forest where the trees are protected – we do not clear or burn there – and we keep areas next to the forests where we do not clear. The Land Use Committees have brought all the different village groups under one umbrella and there is much better co-operation and unity in the community. Also, we have been involved in drawing up by-laws that govern jhum and we find that people follow these more diligently.

Having community groups like the Land Use Committees and the Self Help Groups has made a great difference to our community. Before, all decision making powers rested with the Angh (the traditional king) and the Village Council, which was made up only of men. The kinds of groups we have formed through the project include all sectors of the community – church members, students, youth, women, landless farmers, the elderly. These committees have become places where all members of the community can share their ideas and opinions and have a say in making decisions.

For me, the most important difference that these structures have made is the better status of women. In traditional Naga customs, women have a lowly position in the community, and even within family structures. We cannot own land and had no say in decisions about land, even though women have always played an important role in tending the jhum lands. We cannot serve on the Village Council. But, our involvement in the Groups and Committees has given us a much better position in the community – in meetings we can present ideas and be involved in decision-making. This is a very big step that has given us equal rights to men when it comes to decisions about land. We can now attend and even preside over meetings in the same way as men. In fact, the day before a Land Use Committee meeting, the women meet to talk about the issues they want to discuss at the meeting so that we go there well-prepared.

In the old days, the only way a woman like myself could make money was to sell produce from the jhum lands. Now that our harvests are better, we can earn more money this way and this raises our standard of living. But we have also been trained in financial matters – book-keeping and financial planning. Through our Self Help Group, we were introduced to the idea of setting up an inter-loaning scheme among our members (called a revolving agricultural fund) – we can borrow money from this scheme at much cheaper rates than the private money-lenders would charge us. And we earn interest. This has made it possible for me to set up my own hand-loom business, so that I have more economic power – I am earning three times what I did before. I am using this to pay for my daughter’s university education – she is busy with her post-graduate studies.

I could never have imagined before how much our lives could be changed – we have learnt skills, we can teach others and earn our own money. And we have standing in the community.”

Zubeni Lotha at the market in Mokokchung Town, Nagaland

India’s north-eastern state of Nagaland is recognised as an ecoregion of global importance for biodiversity conservation. Its topography, isolated geographical location and range of climatic conditions have shaped the state’s unique ecosystems that are home to a highly diverse forest flora and fauna, including numerous endemic and threatened species, and an especially rich endowment of birds. It is also home to some 2.2 million people, most of whom make their living from agriculture.

Shifting cultivation, locally referred to as jhum, is the main form of agriculture as it is socially preferred and wellsuited to the agro-climatic conditions and steep terrain of the region. Jhum is a form of agroforestry that makes use of alternating short-cropping phases interspersed with natural or semi-managed fallow periods. Changing lifestyles and increasing population pressures have resulted in more land being brought under jhum (with a corresponding increase in deforestation), and shorter cropping cycles. This has meant that there is not enough time to restore soil fertility or for plant cover to regenerate, resulting in increased soil erosion and disruption of hydrological cycles. The net effect has been increased land degradation, lowered productivity, and rising poverty and food shortages, all of which are made worse by the effects of an increasingly erratic climate. In 2009, the Government of Nagaland partnered with UNDP to implement a GEF-funded project to reduce land degradation and promote sustainable jhum practices, in support of the livelihood needs of local communities. The project provided assistance to jhum farmers in 70 villages in three districts (Mokokchung, Mon and Wokha), by introducing participatory land-use planning, generating awareness, building institutions and supporting integrated farm development that enables ecologically sound land stewardship. A key factor in the success of the initiative has been the establishment of women’s Self Help Groups, of the kind described by Mrs Nyieman, through which women have been empowered to play a vital role in arresting land degradation, addressing food-security and building resilience to climate change. To sustain the gains made during the project, the government of Nagaland has invested a further US$ 1 million in scaling-up activities, and plans are in place to replicate the lessons learnt across the state through an upcoming project supported by the International Fund for Agricultural Development (IFAD). 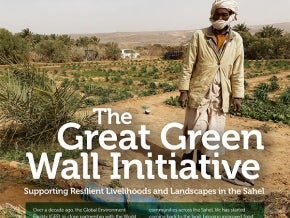