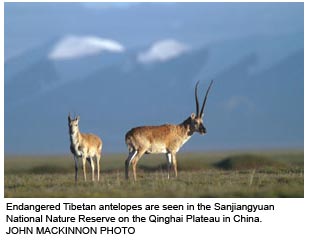 From a small wooden hut on a steep hillside in Bhutan, a young boy watches over a handful of grazing yaks as the early morning fog lifts. On the other side of the world, a business executive pours herself a glass of cool water at the end of a sweltering day in New York City.

More than 3,200 km to the south, an aspiring tour guide studies a book on the birds of Costa Rica, anxious to impress her first tour group the following day. Some 12,800 km to the west, a fisherman in the tiny Pacific island nation of Kiribati heads home with his day's catch of fish, enough to feed his family and a few neighbors. Nearly 5,000 km to the north, a participant at the Conference of Parties to the Convention on Biological Diversity in Nagoya places an order for a tuna sushi roll.

Though they may not realize it, each of these persons shares a common bond in a very real, tangible and vital way — each depends on a protected area for food, water, income and/or subsistence.

The yaks in Bhutan are grazing in Thrumsingla National Park, a place where Bhutanese have grazed their yaks for millenniums for milk and wool.

In New York, all 8 million residents, along with the 47 million annual visitors, rely on protected areas in upstate New York to supply their drinking water day in and day out. The tour guide in Costa Rica is soon to become part of her country's $2.2 billion nature-based industry, an industry that represents 8 percent of the nation's economy and over 13 percent of its employment.

The fisherman in Kiribati relies on the Phoenix Islands Marine Protected Area — the largest marine protected area in the world, larger even than California — to supply his family with daily protein. He is not alone — fish accounts for around three-quarters of the animal protein in Kiribati's national diet, a figure that is consistent throughout the Pacific islands. Most of the fish harvested for food get their start in the rich spawning grounds of the mangrove forests and coral reefs in marine protected areas, including tuna — the Phoenix Islands Marine Protected Area is one of the most significant breeding grounds of tuna in the world.

These examples illustrate the fundamental but often overlooked relationship between human welfare and the biodiversity found within protected areas; the species, ecosystems and ecological processes that compose the natural world are as basic to human existence as food and water.

For example, one-third of the world's largest cities, including Sao Paolo, Sydney and Tokyo among many others, obtain a significant portion of their drinking water directly from protected areas. This drinking water provides enormous savings to cities around the world: New York City has saved at least $6 billion in water treatment costs alone.

Similarly, hundreds of millions of people depend on forests for their livelihoods and subsistence, and wild animals make up more than 20 percent of animal protein in over 60 countries. Not only do protected areas directly provide food to people around the world, they also indirectly play a critical role in ensuring global food security — they harbor the wild relatives of globally important food crops, such as wheat, rice, potatoes and soybeans, which together make up more than two-thirds of the global food supply. By providing a natural stock of genetic diversity, these wild crop relatives help us regulate and treat potentially catastrophic crop diseases.

Perhaps the most important service that protected areas provide is the ability to help regulate the Earth's climate. Over 15 percent of global terrestrial carbon stocks are located in formal protected areas, with more in indigenous and community conserved lands, with an estimated value in the trillions of dollars.

Protected areas play a critical role not only in sequestering carbon, but also in enabling human and natural communities to adapt to climate change, as well as in buffering humanity from the worst of climate change impacts. Protected coral reef ecosystems alone contribute the equivalent of more than $9 billion per year in coastal protection around the world.

In addition, an estimated 10 percent of the Earth's surface is under the control of indigenous and community groups and are managed as conservation areas. Taken together, these areas continue to pay major dividends every year — a recent study called "The Economics of Ecosystems and Biodiversity" estimates that the long-term benefits of protecting land are 250 percent greater than the benefits of converting that land to any other use.

In 2004, the governments around the world agreed upon a global Program of Work on Protected Areas under the Convention on Biological Diversity. This ambitious program calls for governments to establish comprehensive, ecologically representative, effectively managed and sustainably funded networks of terrestrial protected areas by 2010, and of marine protected areas by 2012.

This month, the world's governments are meeting in Nagoya to review global progress on protected areas, to develop a new 10-year strategic plan on biodiversity, and to renew their commitments to the Program of Work on Protected Areas.

Much has changed in the past six years: climate change has become a dominant global issue; there is a growing consensus that we need to step up efforts to meet the U.N. Millennium Development Goals and, in particular, to reduce poverty around the world; there is increasing recognition of the ongoing loss of biodiversity and critical ecosystem services; and the world has been struck by a global economic crisis.

All of these factors are influencing what society expects from protected areas. In addition to conserving biodiversity, protected areas are now expected to do more economically, socially and ecologically by maintaining the ecosystem services that support life on Earth, by enabling human and natural communities to adapt to climate change impacts, and to provide livelihoods and sustenance to the 2.2 billion people who live on less than $2 a day.

A new publication called "Protected Areas for the 21st Century" highlights the steps governments need to take in planning, managing, assessing and funding protected areas in order to meet these changing expectations and demands. The book focuses on three key contributions that protected areas can make beyond conserving biodiversity: provide sustainable livelihoods for the world's poorest communities, maintain key ecosystem services to sustain all life, and enable human and natural communities to adapt to climate change.

The book is published jointly by the United Nations Development Program (UNDP) and the Convention on Biological Diversity (CBD) and documents key findings from projects financed by the Global Environment Facility (GEF) through UNDP. A set of guidelines and good practices are provided, to enable countries to address the new challenges that confront protected area managers. The GEF has invested in more than 2,300 protected areas, covering more than 634 million hectares — an area equivalent to Greenland, Mongolia and Kazakhstan combined.

UNDP, one of the implementing agencies of the GEF, has supported more than 700 protected areas in 55 countries over the past five years, covering nearly every goal, target and action of the Program of Work on Protected Areas. The CBD is the primary global mechanism for conserving biodiversity and is largely responsible for the great strides in protected areas over the past half decade.

As governments and others gather together toward the end of 2010, the end of the first decade of the 21st Century and the officially designated Year of Biodiversity, it is a time for reflection. We have much cause to celebrate in the establishment of protected areas worldwide, and with them the safeguarding of the species and ecosystems upon which all life depends.

But we also have much more cause for concern. Protected areas and biodiversity face threats from all sides. Only one-third of protected areas worldwide are effectively managed, there is a financial gap measured in tens of billions of dollars, and protected areas are being mined for minerals, stripped of forests, dissected by roads and invaded by alien species.

A large number of the world's known species are at risk of extinction as a result of climate change, which is compounding existing pressures. With this loss comes the unraveling of basic life support systems. Many scientists agree that the next decade is critical in determining the direction of the 21st century and beyond.

Delegates at the COP10 CBD conference have some clear choices ahead. They may continue to view protected areas as a luxury investment, a vacation spot and a photo opportunity. Or they may begin to view protected areas as the true social, economic and ecological investments that they are. The long-term well-being of all of us — yak herders, business executives, tour guides, fishermen, and national delegates alike — may well depend on that choice.

Nik Sekhran is the head of the Biodiversity and Ecosystem Program of the United Nations Development Program. Jamison Ervin is the Global Project Manager for the UNDP/GEF Early Action Grant Project on the CBD Program of Work on Protected Areas and a senior adviser on protected areas to UNDP and other international organizations.