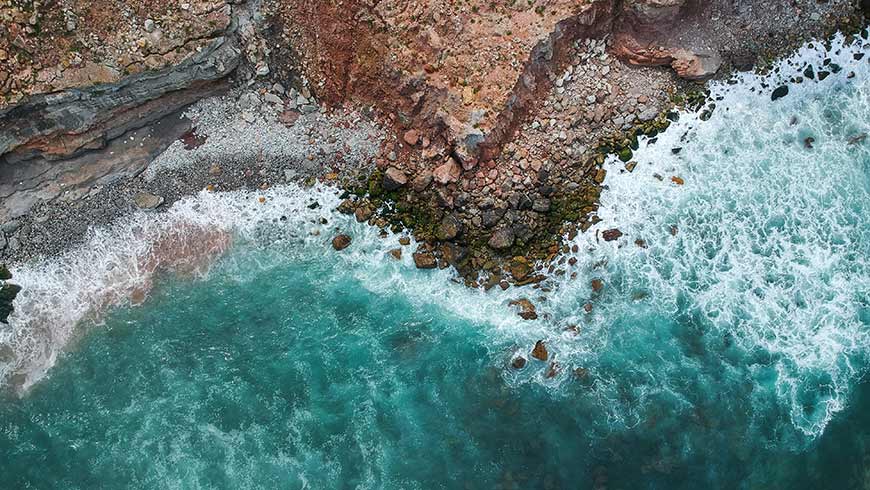 'The ocean has shaped my life, from my beginnings in the outer islands of Fiji to my appointment last year as the UN Secretary-General’s special envoy for the ocean.' Photo: Shutterstock.com

The ocean has shaped my life, from my beginnings in the outer islands of Fiji to my appointment last year as the UN Secretary-General’s special envoy for the ocean. Like millions of others before me who have taken sustenance and succour from Neptune’s world, I know there is so much for which we should give thanks. And yet, over the intervening decades of my life, a quickening cycle of decline has been imposed on the ocean’s health by the ever-accumulating effects of harmful human activities.

Thanks to growing concentrations of greenhouse gases in the atmosphere, marine life must now battle with increasing levels of acidification, warming and oxygen depletion. Once-pristine waters are constantly fouled by unconscionable flows of plastic pollution and damaging effluent from industry, agriculture and sewage. Meanwhile, human greed, as opposed to humanity’s need, is depleting the planet’s fish stocks and marine resources at an unsustainable rate.

There is a vicious causal link between global warming, thermal stress on coral reefs, massive loss of marine biodiversity, and the wellbeing of coastal communities. Add rising sea levels and the increasing frequency and ferocity of extreme weather events, and – for an islander like me – it’s easy to imagine that you are drowning.

Does this matter to you, if you live in the urban citadels of post-industrial societies? Just contemplate that every second breath you take comes from the ocean’s oxygen, produced by phytoplankton and other marine plant life, and the answer should be abundantly clear. The ocean is this planet’s source of life.

Yet, despite this gyre of decline, I remain a steadfast optimist. I am confident that, by 2030, we will reverse the negative cycle, and restore our relationship with the ocean to one of respect and balance. My confidence is based on the fact that we have a comprehensive plan to save the ocean, agreed to by all 193 UN member states in 2015 – the Paris climate agreement and the UN’s sustainable development goals (SDGs). Fidelity to these is the prime responsibility of all us living in the 21st century. I do not doubt the force of that fidelity, for humankind always bends in the direction of survival.

SDG14, the ocean goal, sets out to conserve and sustainably use its resources. Its 10 targets are in harmony with the other 16 SDGs in working to bring an end to poverty, hunger and environmental degradation of this best of planets. The Ocean Conference was held in June 2017 at the UN headquarters in New York in support of implementing the goal, and proved to be the game-changer required to raise global consciousness on the urgent need for remedial action. Over the last year ocean action has escalated around the world.

In April, the heads of government of 53 Commonwealth nations agreed to a bold Blue Charter to protect the ocean from the threats of climate change, pollution and overfishing. That same month, the International Maritime Organisation adopted an initial strategy to halve global emissions from shipping by 2050. Meanwhile, Canada has announced it is using its 2018 presidency of the G7 to persuade the world’s richest countries to invest in a healthy ocean, pushing for a zero-plastics-waste charter, including support for improved waste management in less developed countries.

Last December, the UN declared 2021-2030 to be the International Decade for Ocean Science, setting the global community the challenge of making a great leap forward in knowledge of our planet. The Ross Sea Marine Protected Area, protecting 1.55m sq kms of rich marine biodiversity off the coast of Antarctica, was established in the same month.

Governments, states, cities, and organisations around the world are banning the scourge of single-use plastic shopping bags, drinking straws, cutlery, food packaging and micro-beads. And major food and beverage corporations are increasingly pledging – in reaction to mounting public concern about ocean plastic – that their packaging will be reused, recycled or composted in the near term.

We shouldn’t underestimate the powerful attraction of a “sustainable blue economy”, which – I firmly believe – will feed and support the lives of our children and those who come after them. Getting it right – whether through aquaculture, offshore energy, green shipping or ecotourism – is vital not just for SDG14, but for the future of the global commons, and humankind itself. To do this we must move with purposeful steps. Here are five that could be taken immediately.

Let us stop throwing good money after bad, and resolve to prohibit subsidies that support harmful and illegal fishing. A critical opportunity to eliminate them is looming at the 2019 ministerial meeting of the World Trade Organisation. It must not be missed.

We must cease our criminal consumption of illegally caught fish, estimated to be worth $23bn a year. We must demand this of our fishmongers, our restaurants and ourselves. There are now technologies and systems that can be adopted by governments and retailers to enforce the traceability of fish catches.

We must meet the SDG14 target of establishing 10% of the ocean as Marine Protected Areas (MPAs) by 2020. Thanks to ones Brazil, Chile, Mexico, the UK and others have recently created in their waters, we are now around 7%. The time has come to establish extensive MPAs in the high seas.

Marine and coastal tourism – worth some $390bn a year – has a massive stake in safeguarding the ocean’s health. Hotels, cruise ships, tour operators and governments, all need to demonstrate diligent stewardship of the ecosystems their industry exploits, through such measures as sustainable seafood supplies, zero pollution, coral reef restoration and investment in natural capital.

Look down, not up

Let’s put further exploration and mapping of Mars and the Moon on hold until we’ve done more on our own planet. So much of what lies beneath the ocean’s surface remains unknown and its time we put serious funding into the science of discovering it. Only then will we be able to produce the right answers for the challenges facing us through ocean acidification, deoxygenation, and changing ocean thermoclines and currents.