The tagline for last week’s 45thanniversary of Earth Day was: “It’s our turn to lead.” In Burundi, French NGO Resilience Now is leading capacity-building activities with communities near Kibira National Park to improve agricultural practices and preserve wood resources.

As the main source of energy in the region, wood is a hot commodity. Poverty, population growth and a lack of alternatives have led to forest degradation and deforestation for firewood and charcoal. With support from the Critical Ecosystem Partnership Fund (CEPF) through its investment in the Eastern Afromontane biodiversity hotspot, Resilience Now strengthened natural resource management practices in the fragile habitat around Kibira National Park.

Working with DukingiriKibira (Kibira Women Association), Resilience Now led a solutions sharing workshop for 30 participants, of which two-thirds were women. This focused on energy and agriculture, and introduced the concept of permaculture ― an approach to create sustainable human environments through natural and edible landscaping ― for income generation to enhance local communities’ resilience and their quality of life. 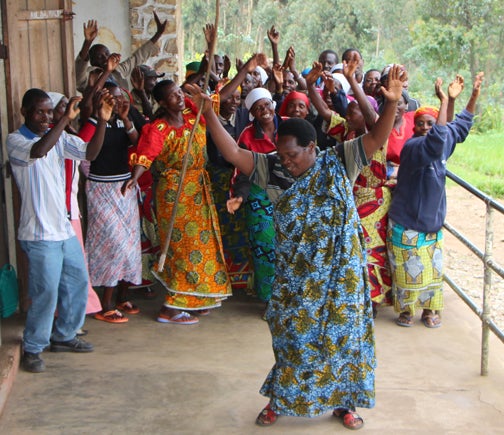 Participants sing and dance during a Resilience Now workshop in Burundi while the storyteller
describes a future where people and nature thrive together. © Resilience Now – Claire Galvez-Wagler

Why is it important to conserve land and wood resources near Kibira National Park?

Kibira National Park ― the second largest nature reserve in Burundi ― contains more than 644 species of plants, 98 species of mammals and 200 species of birds. The park also provides more than three-quarters of the water for the country’s largest dam and provides protection against soil erosion.

Despite its status as a national park, the civil war that started in Burundi in 1993 caused many people to seek refuge in Kibira’s forests. Refugees and people living near the park damaged its ecosystems by cutting timber and clearing land for agriculture. Today, deforestation, poaching and some agricultural practices still threaten the area.

Resilience Now worked with nearby communities to develop sustainable agriculture, energy and income generating activities that preserve the environment while meeting the local communities’ livelihood needs. The project used a three-step methodology:

1. Complete a participatory resilience assessment to determine the challenges. The community identifies its strengths and discusses the future it wants; the importance of the environment for community resilience is highlighted; and the community becomes aware of the problems and risks it faces.

2. Explore alternatives through a field trip and training. After identifying successful sustainable practices and techniques used in the region, the beneficiaries visit sites where these practices are used to benefit from peer-to-peer learning. The solutions presented are analyzed and presented to the rest of the community members, who are then trained in sustainable natural resources management.

3. Draft a participatory action plan and begin implementation. The community chooses the solutions it wants to implement, and commits to these by determining the appropriate community contribution. Support is provided for the financing and implementation of actions by connecting the community with the resources they may need, including other stakeholders and potential donors.

“The 30 beneficiaries who participated in the peer-to-peer training were passionate about discovering the solutions, and the host communities were no less thrilled to present their work,” said Florence Gibert, project manager with Resilience Now. “Each time, both communities feverishly shared technical advice.”

During the solutions sharing workshop, numerous options for the communities were discovered and detailed in the Participatory Action Plan, ranging from beekeeping and farming cooperatives to compost making and improved cook stoves.

According to the World Health Organization, one in eight people died in 2012 as a result of poor air quality due to pollution, with 4.3 million deaths a result of fumes from cooking or heating. In Burundi, conventional fireplaces not only consume a lot of wood, but they also cause respiratory problems due to the fumes produced. 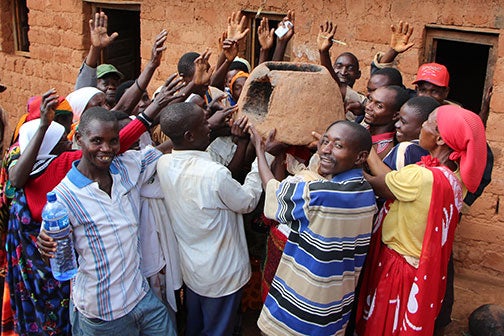 Participants unanimously acclaim the improved cook stove, one of the many solutions identified during a
Resilience Now workshop to improve climate change resilience in Burundi. © Resilience Now – Florence Gibert

The workshop participants clearly understood that their traditional fireplaces are not good for the environment or their health.  And they decided to act now by identifying improved cook stoves as a sustainable solution for their community. According to their action plan, the beneficiaries are willing to provide the materials required for the manufacture of improved cook stoves and have committed to manufacturing these for the DukingiriKibira and other nearby communities. The beneficiaries also identified Réseau Burundi 2000+, an organization working to support farmers in Burundi, as a possible technical partner in manufacturing the improved cook stoves.

“I was very impressed by what they [the community members] learned from other associations during the exchange visits, and they have now started putting into practice some of what they learned,” said Jean-Paul Ntungane, a member of the Eastern Afromontane regional implementation team. “They are now making energy-conserving stoves and could do more if they get additional funding.”

Since 2000, the CEPF has been working on biodiversity conservation and poverty alleviation in the world's most critical ecosystems, known as the biodiversity hotspots.  To date, partners of CEPF have collectively secured total $238 million for the program, and invested over $150 million in 23 hotspots around the world.  The program has made significant contributions in establishing new protected areas, species conservation, and mainstreaming biodiversity in production sectors.  The CEPF has been working on these activities through engaging and enhancing capacities of over 1800 civil society organizations, including indigenous peoples.

​​​The Global Environment Facility, Conservation International, and the World Bank were the initial partners of this conservation fund, which has now grown with additional partners including European Union, Governments of France and Japan, and MacArthur Foundation.