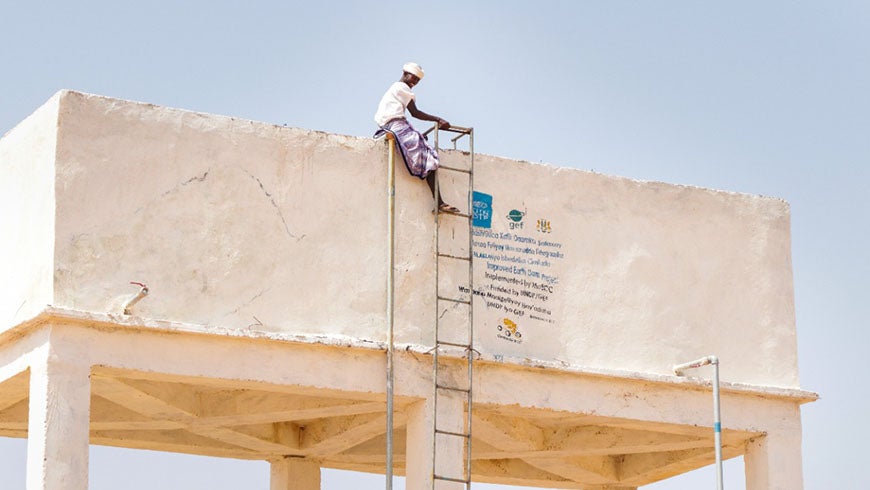 Led by Somalia's Directorate of Environment and Climate Change, Office of the Prime Minister, and implemented by the Ministry of Energy and Water Resources, with $8.8 million from the Global Environment Facility's Least Developed Countries Fund and $1.5 million from the UNDP, the new four-year project will establish Somalia's first National Hydro-Meteorological and Monitoring Service, install automatic weather stations and monitoring equipment across the country and expand Somalia's existing flood and drought forecasting and early warning tool (FRISC-DIGNIIN).

The project will also work closely with villages to provide training on flood management and water conservation, as well as teaching pastoralists and small-scale farmers, including both men and women, to sustainably produce farming and livestock products.

"With the onset of climate change, our country is facing more frequent droughts and floods. Those living in rural regions are particularly vulnerable," said Deputy Prime Minister, H.E. Mahdi Mohammed Gulaid. "Under this new project, we will put in place the foundations for Somalia and its people to manage their precious water. This includes reforming national policies and systems; building knowledge and skills at the national, state and community level; and expanding climate-monitoring infrastructure and early-warning systems."

Somalia experiences major climate-induced shocks every two to five years, with flooding, cyclones, and particularly drought. These have contributed to the displacement of 2.6 million people across Somalia and increased competition for water and to support animals and crops.

The effect of climate change in reducing already scarce water resources is expected to exacerbate conflict within communities. Illegal armed groups, such as Al-Shabaab, have already targeted young people for recruitment, particularly in rural regions beset by drought-induced food insecurity and widespread unemployment.

Pastoralists are particularly vulnerable to changes in climate because they rely on rain-fed rangeland for grazing livestock and have very few fixed assets. Often lacking formal ownership of land, they are marginalised in disputes over access to water.

"This project will help us to tackle Somalia's greatest challenges in water management and make sure that institutions and communities are more resilient to climate impacts" said Minister of Energy and Water Resources, H.E. Fowzia Mohammed Sheikh.

"We are extremely pleased to see this fantastic project begin and are providing technical support for implementation. Access to clean water saves lives directly, but is also closely linked to food security, livelihoods, poverty reduction, gender equality, and - in Somalia's case - peace and security.

"Given increasing water scarcity in Somalia, the choice as to how each drop should be allocated and managed is critical."

This news story is based on a UNDP Somalia press release.