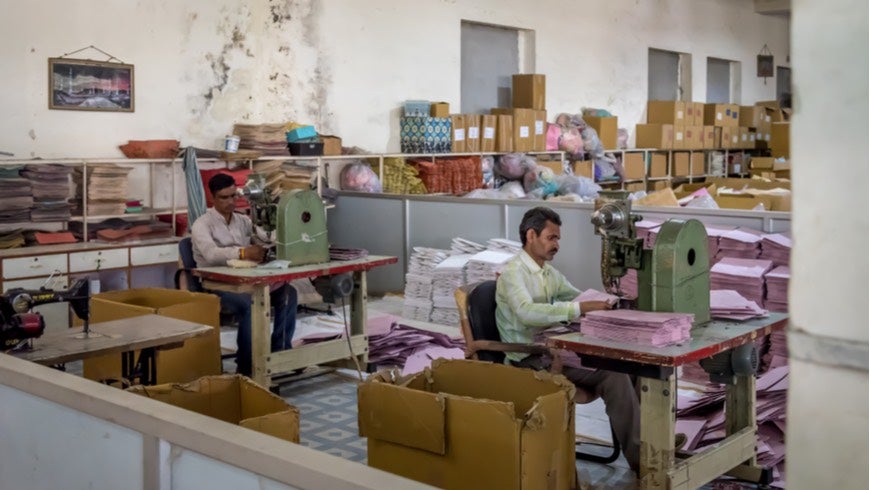 Employees work inside a garment factory in Jaipur, India.

The world economy has grown three times richer over the last 30 years, yet working people have been marginalised. People are frightened about the future. They want to know there is security and opportunity for themselves and their children.

If working people don’t feel like they have a secure future, if people can’t earn a minimum wage on which they can live with dignity, if there is no rule of law to sort grievances from disputes in the workplace and if there is a dominant supply chain model of low wages and insecure and unsafe work, trust breaks down.

The sustainable development goals – also known as the global goals – can make a real difference. In the private sector alone, an estimated 380m new jobs could be created by 2030 through achieving them. Together, the goals put business, governments and communities on a path to end poverty with the dignity of decent work as the catalyst to achieve it.

The Business and Sustainable Development Commission, on which I served, reported in January that putting the goals at the heart of the world’s economic strategy could unleash a step-change in growth and productivity, while creating a world that is both sustainable and inclusive – but that this would require radical change in the business and investment community.

Such change is urgently needed, not least for the up to 94% of the workforce of 50 of the world’s largest major multinationals which is effectively hidden. Global supply chains – now the dominant source of wealth in the global economy – depend upon them but they are not directly employed and are in low wage jobs with few rights.

Companies take little or no responsibility for these workers, knowing that this is a model of low wages, insecure and often unsafe work, and that informal work and modern slavery are increasingly rife in their supply chains. People often have no knowledge of who they really work for in global supply chains. What they do know, however, is that the business model, and the social contract between workers and business, is broken.

Those in work, and their families, face a struggle, at best to live on their wages. A global poll on wages and inequality across nine countries representing over half of global GDP, carried out for the International Trade Union Confederation, shows that 45% of the world’s people are living on the edge with another 52% just about managing.

The overwhelming majority of people, therefore, have no buffer for the future even if they get by one day at a time. A significant share of households, even in industrialised countries, have experienced flat or falling real incomes for a decade or longer.

The share of labour in national income has declined by, on average, 10 percentage points of GDP in industrialised economies over the last three decades. This has serious inter-generational effects. Jobs and gender gaps are not shrinking – and neither is the level of youth unemployment.

Income inequality has increased in 22 out of 25 OECD countries with comparable statistics. OECD work shows that in all countries the “very top of the income distribution” have benefited most.

These factors have combined to raise the real prospect of secular stagnation and have contributed to a popular backlash against governments, institutions and the very functioning of economic systems. All this inequality is by design. Workers know it and they resent the behaviour that perpetrates it.

In the short term, inequality is stifling recovery. In the medium term, it is fuelling public mistrust, creating the conditions for rising populism. In the longer term, it will result in rising skills gaps, increased unemployment and fear of survival on stagnant or declining incomes. The anxiety generated by all this – in the absence of just transition measures – mitigates against a smooth transition to a zero carbon economy.

We need an industrial transformation agenda to create the jobs of the future. We need innovative industries and industrial policies which design their production around looking after workers’ health, respecting the environment, establishing safer processes, and researching and developing clean technologies. As this must happen holistically during the whole product life-cycle and along the entire supply chain, the global job-creating potential of such a transformation is convincing.

At a minimum, businesses who commit to the global goals should ensure that jobs throughout their supply chains are safe and integrate business into their operations using the UN Guiding Principles on Business and Human Rights.

We have a shared responsibility. Trade unions engaging in social dialogue with business and government give workers a voice in securing dignity at work and this rebuilds the social contract. With dialogue we can achieve real reform.

There has been progress. Since 2000 there has been an increase in global framework agreements between multi-national firms and global union federations, where companies consent to respect workers’ rights and to promote decent work worldwide within their subsidiaries and along their global supply chains.

The G20 under the German Presidency can take a lead by resetting the parameters for rights, the rule of law, social protection, wage mechanisms, and – consequently – shared prosperity.

Business needs to adopt the global goals and to look at how they make their supply chains and their key operations not just sustainable but work for working people, thus sharing prosperity.

A new social contact where people, their environment and economic development are rebalanced can ensure that everybody’s sons and daughters are respected – with freedom of association, minimum living wages, collective bargaining and safe work assured. Only a new business model based on old principles of human rights and social justice will support a sustainable, zero carbon, zero poverty world.

Programme for Cleantech Innovation and Green Jobs in Morocco