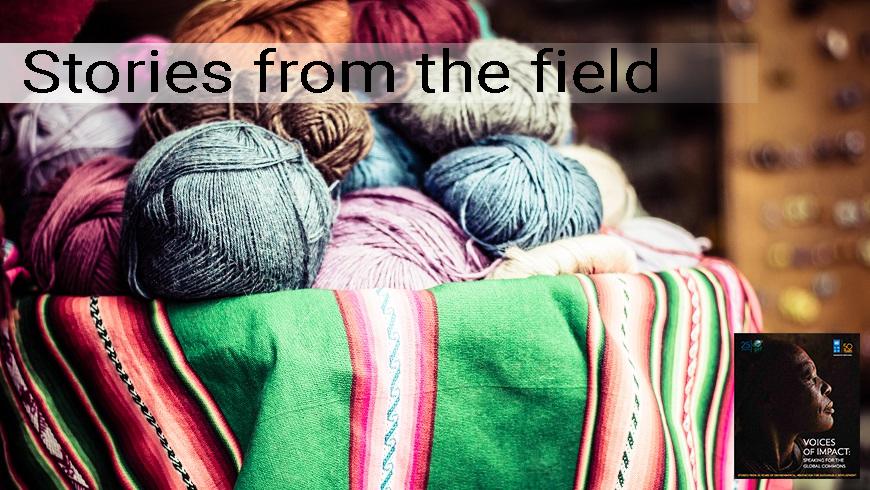 "Slowly, the project showed how important the wild cotton is – not only for us to earn a living, but also because it brings back our old customs. The government changed its laws, and in 2006, the Regional Government declared wild cotton as a natural product of the region."

“I was working hard on a poultry farm trying to make a living – it was a daily struggle to make enough money simply to put food on the table. I had begun noticing on my way to work, that a group of women were meeting every Tuesday, but I felt too shy to join them. One day, I worked up the courage and went with my smallest daughter, to see what these meetings were about. I didn’t know then that my life was about to change forever – when I heard what the women were talking about, I decided to quit my job at the farm and get involved in this new project.

The meeting was the beginning of a crusade to save a wild cotton variety that our grandparents used to grow to make items for daily use – dresses and fish nets. At the time, our interest was to see if we could use this cotton to find a way out of poverty. When we started looking for wild cotton seeds, we realized there were almost none left – we looked in every house, on every plot of land, but, no one had any seeds. We eventually found some buried in pillows, and on a few plants that remained forgotten in the fields, or in hedges around the gardens.

Now that we had the seeds, we had to learn how to grow them. It was not easy, especially as we also had to ‘fight’ our husbands who did not look kindly on their wives getting together on their own to talk about work. We formed an association and started cultivating the cotton on land loaned to us by other women. Then we had another battle – the extension agency of the Ministry of Agriculture came to cut and burn our wild cotton; there was a law in place that banned its cultivation because – they said – it brings insects that infest commercial cotton.

Luckily for us, we were able to invite the Technical Coordinator from the Ministry to investigate this. It was found that the native cotton was not causing pest infestation, and we were allowed to carry on growing it. Slowly, the project showed how important the wild cotton is – not only for us to earn a living, but also because it brings back our old customs. The government changed its laws, and in 2006, the Regional Government declared wild cotton as a natural product of the region.

This cotton is special because the cotton bolls come in different colours. Growing up, we didn’t think of this as anything special – we thought that coloured cotton was normal. Now, we know its value and enjoy seeing the faces of people that come to visit us and can’t believe their eyes when they see our cotton plants and products – we learned not only to cultivate this type of cotton, but have brought back old weaving techniques that we use to make textiles and crafts that we sell for our livelihoods. I have been able to send one of my daughters to medical school and support my family – and one of my other daughters also works in the project now.

We have been empowered as women. We are able to participate in fairs, receive visitors from around the world, and we even won the Equator Prize. These achievements would not have been possible without the support we have received.”

YOLANDA CONTRERAS,  was raised by her grandmother in the district of Mórrope, Region of Lambayeque, in northern Peru. She is the mother of 3 children, a cotton farmer and an entrepreneur who markets cotton products as her main source of income. She is a member of the women’s group who have helped save a rare species of native cotton from extinction, and recover traditional Moche weaving practices.

Cotton has played an important role in local livelihoods as both a high value and culturally important cash crop, since pre-Inca times. Since the 1930’s, however, native (wild) cotton, Gossypium barbadense, has been purposefully eliminated for fear that it carried pests that could spread to commercially valuable white cotton cultivars. Without this valuable cash crop, communities in the Mórrope District – who rely on small scale cultivation for income – were left with fewer opportunities for earning a living, resulting in social and economic stresses and rising poverty.

In 2003, local women formed an association (Artesanas Association of Arbolsol and Huaca de Barro) to stimulate local livelihoods through environmentally responsible cultivation of wild cotton, and by reviving traditional methods of cotton production. These women have succeeded in recovering five traditional colours of wild cotton, providing the basis for muchneeded income-generating activities, including the sale of handcrafts and organic fertilizer. The Association has also been active in managing scarce water resources, resulting in improved local irrigation systems, increased agricultural productivity, and a better quality of potable water. The Association which began as a women’s group, now includes the whole community, and the project activities have been replicated in 20 other communities.

The recovery of wild cotton by women in Peru was enabled by support from the GEF Small Grants Programme through six projects over an eleven-year period (2003 – 2014). Launched in 1992 as a GEF corporate programme with UNDP as the Implementing Agency, the Small Grants Programme operates on the principle of “thinking globally, acting locally” – the approach advocated by Agenda 21, the global action plan for sustainable development that emerged from the Rio Earth Summitt. The SGP focuses on providing long-term support to poor and vulnerable communities and civil society, to build their capacity for addressing critical environmental and social issues. Over the last 25 years, the SGP has supported over 20,000 community-based projects in more than 125 countries.