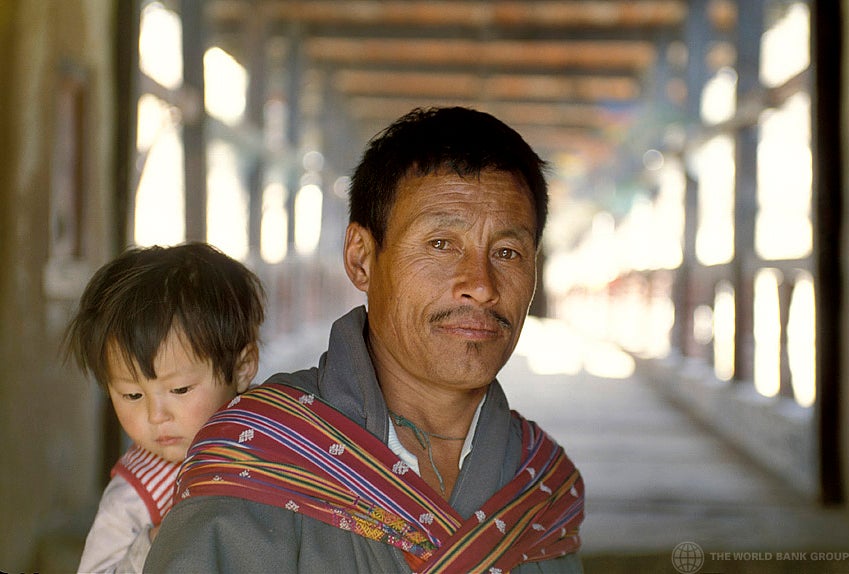 The world needs innovative thinking and collective action. The need for more support and funds for the Facility and the communities is greater than ever before if we are to translate these global aspirations and plans into local actions.

The Earth Summit in Rio de Janeiro, Brazil, in 1992 was an historic moment for our planet, producing the United Nations Framework Convention on Climate Change and the Convention on Biological Diversity in addition to the Rio Declaration. Bhutan, under the far-sighted leadership of our monarchs, was one of the early countries to welcome and support both agreements to help tackle the world's most pressing environmental problems. In the same year, the Bhutan Trust Fund for Environmental Conservation was established with contributions from the Global Environment Facility, World Wildlife Fund, Norway, Switzerland, Denmark, Finland, the Netherlands and the Royal of Government of Bhutan. It was the world's first environmental trust fund.

Over the years, the Facility – established on the eve of the Earth Summit – has grown in support and outreach from a $1 billion programme to the investment of over $17 billion. The number of implementing agencies has increased from three (the World Bank, United Nations Development Programme and UN Environment) to eighteen. Many developing countries, particularly small and vulnerable ones, have benefited immensely from these investments and are very grateful to the Facility's donor community.

Requirements for public consultation and inclusion of social and environment safeguards in the design of projects are among the Facility's most important policies. The best interventions were introduced and traditional practices were recorded in the process of dialogue and discussions. During these participatory processes, millions of citizens – including local leaders and community members – were educated. What small and vulnerable countries require is technical expertise and capital resources to implement timely local actions. It is good to recall the sixth principle of the Rio Declaration: “The special situation and needs of developing countries (particularly the least developed and those most environmentally vulnerable) shall be given special priority. International actions in the field of environment and development should also address the interests and needs of all countries.”

In 2002, the Global Environment Facility Assembly took a bold decision to include land degradation – covered by another Rio Convention, the UN Convention to Combat Desertification – as yet another focal area for support. This was warmly welcomed by developing countries affected by land degradation/desertification, and those whose economies were driven largely by the agriculture sector. Land degradation, one of the main causes of concern in many developing countries, has direct linkages to the management of local biodiversity conservation, and measures to mitigate, and adapt to, climate change. More than 70 per cent of arable land is under dryland farming in Bhutan. Every season, the farming community loses many tons of soils from poor land management upstream leading to an increased sediment loads downstream.

Lessons from implementing Global Environment Facility-funded projects in Bhutan suggests that it is indeed possible to formulate projects and organize meetings jointly for the three Rio sister conventions since the target groups are farming communities and relevant sectors, and the conventions' proposed interventions converge at the local ecosystem level. Perhaps this could be a way forward to delivering outputs of the conventions efficiently, effectively and sustainably.

In the past 25 years, the Facility has been supporting developing countries to meet convention obligations through enabling activities. Local capacity has been developed to understand the project concepts and the components of policies and strategies of the Facility and its implementing agencies. Field observations and studies also indicate that – if local environmental issues like water and air pollution, riverbank protection work, erosion of soil and biodiversity are not addressed quickly – problems only multiply by the next season.

Small and vulnerable countries are most affected by such environmental degradation and also have poor resilience. Thus, they need capital resources urgently and sufficiently. Therefore, it could be timely to examine the current 18-month project cycle and explore the possibility of bringing it down to one year. Similarly, we should examine if it is worthwhile to look at the Facility's System for Transparent Allocation of Resources given the rapidly changing economic scenario of developing countries. Records show, for example, that bilateral donors have either withdrawn or are withdrawing support from small and vulnerable countries whose economies depend on natural resources, while local environmental degradation is being compounded. Likewise, the future of the Least Developed Countries Fund and the Special Climate Change Fund looks uncertain and bleak under current consultations and debates on financing environment actions. In the past, many Least Developed Countries, highly vulnerable to impacts of climate change, took advantage of these funds administered by the Facility. In Bhutan, for example, the water level of one the most dangerous glacial lakes in the Eastern Himalayas was lowered by five metres with funds from the Least Developed Countries Fund.

The Facility has supported over 790 projects for mitigating climate change – contributing to reducing greenhouse gas emissions by 2.7 billion tons – and reduced the vulnerability of more than 15 million people in 130 countries through adaptation measures. This is a great achievement but this is not enough! The global concentration of carbon dioxide in the atmosphere has surpassed 400 parts per million, when the safe level is 350 parts per million. The last time levels of carbon dioxide were this high, humans did not exist. We will also need 60-70 per cent more food by 2050, while air pollution kills 1.7 million children under the age of five every year.

We have experienced the hottest year ever in 2016, a stark reminder that the world is still not on track to limit carbon dioxide emissions and thus raising the big question of whether we can deliver the intent of the Paris Agreement. Yes, we can and we must with our collective effort – for there is no other way!

Collectively, we have endorsed the Paris Agreement to help keep the global rise in temperature below 2°C, and aim to limit it to 1.5°C, above pre-industrial levels. We are also pursuing the Sustainable Development agenda of 2030 with its 17 Sustainable Development Goals all aimed at leaving no one behind. The parties to the conventions prepared and submitted Nationally Determined Contributions, and Strategic Action Plans to tackle drivers of environment degradations. The need for more support and funds for the Facility and the communities is greater than ever before if we are to translate these global aspirations and plans into local actions. It's time to act.