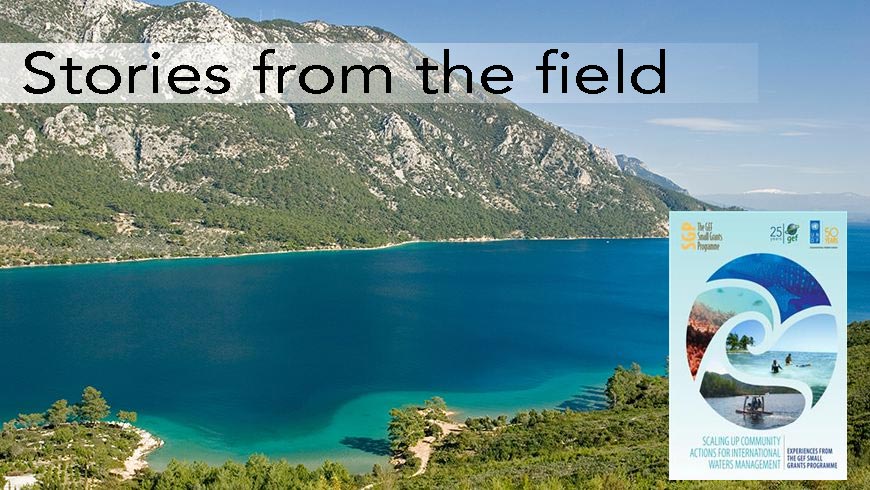 Gökova Bay is one of the most remarkable marine and coastal areas in the Aegean Sea which was designated in 1988 as one of 15 Special Environmental Protected Areas (SEPA) in Turkey, according it critical protection status that requires management plans and coordination among many stakeholders.

The Mediterranean Sea, one of the most distinctive enclosed temperate seas recognized in the list of Global Ecoregions produced by the World Wildlife Fund-WWF, is also home to many marine species listed in Red Data Book of IUCN. In May 2008, the Centre for Advanced Studies of Blanes (CEAB) and the Underwater Research Society observed that most of the shallow subtidal macrophytes habitats in the Mediterranean Sea had disappeared affecting hundreds of different species of fishes and invertebrates.

Gökova Bay is one of the most remarkable marine and coastal areas in the Aegean Sea which was designated in 1988 as one of 15 Special Environmental Protected Areas (SEPA) in Turkey, according it critical protection status that requires management plans and coordination among many stakeholders. The bay is home to numerous protected species such as the critically endangered Mediterranean monk seals and sandbar sharks. The ongoing depletion of fish stocks has had a significant impact on the local economy and on the 200 small-scale fishers who depend on the bay for their livelihoods. In particular, over the last 10 years the white grouper – Ephinephalus aeneus – had a sharp decline from 50 kg/year to almost 0 kg/year affecting local fishermen for which this specie represented 70% of their income as it has the highest economic value in the market.

In order to restore the marine ecosystem, promote sustainable development and improve the livelihoods of local fishers, the Underwater Research Society (SAD), with the support of the GEF Small Grants Programme (SGP) implemented by UNDP, started a project aimed at creating a network of “No Fishing Zones” (NFZ). To achieve this goal, SGP and SAD conducted several awareness raising campaigns, meetings and consultations with the government, local fishers, and other key stakeholders who – at first – were not keen on changing the status of the marine ecosystem.

The Underwater Research Society also organized dialogues between local authorities and NGO leaders around the importance of creating designated protected areas, and conducted high level meetings to advocate for this policy change with government authorities at the national level. To support this effort, SGP Turkey provided technical data and analysis of the results of other SGP projects in the area and helped prepare the official request for the conservation status of the area with the government.

Small scale fisheries and dive centers also contributed to the studies and joined the meetings with the Turkish Environmental Protection Agency for Special Areas (EPASA), the Nature Protection and National Parks General Directorate (NPNPGD), the Turkish Ministry of Agriculture and Rural Affairs (MARA) and SAD in the preparation of integrated marine conservation management plans in the project areas.

In May 2010, the project team participated in a conference organized by The Mediterranean Science Commission in Italy to exchange lessons learned. This encounter was instrumental in developing a network of advisers and supporters of the initiative that also contributed their research on marine and coastal protection in support of the NTFZ.

All the advocacy efforts undertaken with direct community involvement contributed to the designation of the first six no-fishing zones in Turkey. These no fishing zones cover almost 150 km2 of marine and coastal areas. Another important result of this initiative was the introductionof a model for marine patrols to be carried out by the local community and developed in close cooperation with the Coast Guard and Fisheries and Aquaculture Departments.

To date, the impact of these marine conservation zones and patrolling activities in Gökova Bay have improved the overall health of the ecosystem and increased the fishing stock, as well as income of the local fishing folks and cooperatives. In particular, the protection of the endangered sandbar sharks has improved due to the establishment of a protected area in Boncuk Cove, their main breeding site in the Mediterranean. To further reduce the pressure on the ecosystem and help provide livelihoods for the local population, the project introduced fishing tourism.

Gökova Bay has one of the highest numbers of fisherwomen in Turkey. These women usually get involved by accompanying their fathers or husbands to fish and are critical in running the business. However, they are usually invisible as men are the ones who belong to the fishing cooperatives. To empower the fisherwomen, SGP carried out capacity development activities to help them get directly involved in the decision-making processes.

To sustain these efforts and expand the conservation activities in the Mediterranean, in August 2012, the project team created a new NGO called the ‘Mediterranean Conservation Society’ (MCS). It was after the creation of the MCS that a “Community Conservation Marine Ranger Project” was started to control illegal fishing in the area. This initiative was aimed at mitigating the economic impacts on the livelihoods of the fisher folks caused by the introduction of a new conservation designation and to help the government ensure the protection of the NFZs. As a result, the community was engaged in monitoring and law enforcement efforts against illegal fishing by involving local fishermen as volunteer rangers. Nowadays, these community rangers are patrolling the NFZs in cooperation with Coast Guards and other government officials and are considered very effective in the enforcement and monitoring of the marine protected areas by governmental bodies such as the Coast Guard and the General Director for Fisheries and Aquaculture. Currently, MCS is working towards a proposal for legislative change to allow these NGO and community driven ranger structures to operate nation-wide.

In terms of replication, four new NFZs, in addition to the first six, have been officially designated and commemorated with official events. Furthermore, in 2010, the results of this SGP project were integrated in a UNDP/GEF Full Size Project called “Strengthening the Protected Area Network of Turkey: Catalyzing Sustainability of Marine and Coastal Protected Areas”. Through the collaboration between the SGP project and the Full Size project, local communities in the Datça-Bozburun and the Gökova branch of the Environmental Protection Agency for Special Areas are retrieving ghost fishing nets located in no fishing zones of Gökova. The experience of community based environmental management in Gökova Bay provides a model for the other 14 Special Environmental Protected Areas, most of which are located in marine and coastal areas, to replicate.

In May 2013, the Mediterranean Conservation Society (MCS), received the Whitley Award, also known as the "Green Oscar", a prestigious international nature conservation prize, in recognition of their efforts in effectively involving local fishers in the control of the no-fishing zones in the Gökova Special Environmental Protection Area in Turkey. In his speech while accepting the prize, Mr. Zafer Kızılkaya, the Chief Executive Officer of MCS, said: "Today over 200 fishermen and fisherwoman earn their livelihood in Gokova Bay. Thorough our many years of efforts, we developed a community based model to conserve Turkey's first 6 No Fishing Zones and in a few years’ time, we can see the benefits in social and economic terms of No Fishing Zones together with the local communities which is a treasure for us."

MCS has continued the important work initiated in Gökova Bay and has worked to promote environmental policy change. Their effects have been recognized at the international level through the prestigious Equator Prize in 2014, and a second Whitley Award in 2015.