Nakasongola - On Saturday 21st February 2015, Augustine and Donna were the last two rhinos to be implanted with microchips at the Ziwa Rhino Sanctuary. 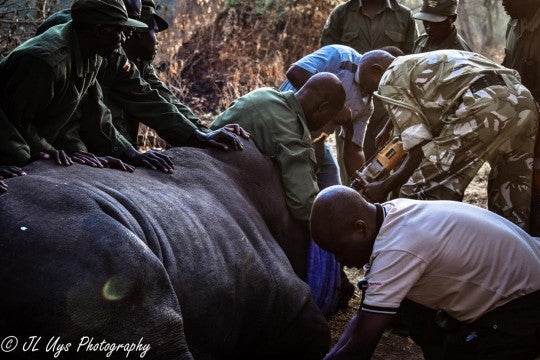 The two are part of a total of ten rhinos which were micro chipped throughout the week as part of efforts to minimise poaching and ensure conservation of rhinos in Uganda. It is hoped that the microchips will help in providing successful prosecution of poachers, if they are caught, as they will provide evidence, minimising this vice which affects the rhino population and the tourism industry around it.

Since mid-2009, there has been a worldwide spike in rhino poaching with many African countries except Uganda losing their rhinoceros populations to poaching. Prosecuting poachers successfully is even more difficult hence the importance of microchips which act as a barcode system leading the poached horn back to the poached animal and its location.

The United Nations Development Programme (UNDP) has been supporting the Rhino Fund Uganda (RFU) as part of its conservation efforts in the country.

“We believe that supporting initiatives such as the Rhino Fund to carry out activities such as the micro chipping we’re witnessing today will go way in boosting Uganda’s tourism industry, creating employment and wealth creation opportunities both at local and national levels and most importantly promoting Rhino Conservation in the country,” Ahunna Eziakonwa-Onochie, the UNDP Resident Representative who was present at the micro-chipping event said.

Angie Genade, the Executive Director of Rhino Fund Uganda thanked UNDP for its support, which she said had significantly contributed to the success of Rhino conservation at the Sanctuary. UNDP initially provided a grant worth U$ 50,000 in 2005 which supported introduction of the first 4 Rhinos and an additional U$ 45,000 in 2014 for the micro chipping exercise.

Efforts to conserve rhinos are important because Uganda’s last rhino was killed in 1983, rendering the species as extinct. In 1997, following a period of political stability, a group of Uganda conservationists formed Rhino Fund Uganda (RFU) as a vehicle to bring back rhinos to the country. RFU, with support from the UNDP GEF Small Grants Programme and numerous partner organizations, established Ziwa Rhino Sanctuary (ZRS) a 7,000 hectares breeding sanctuary for Rhinos which is in central Uganda. The 15 Rhinos in ZRS represent the only wild population of the species in Uganda.

The long term aim of RFU is to introduce rhinos to Uganda’s National Parks which attract tourists hence enhancing Uganda as a tourist destination.