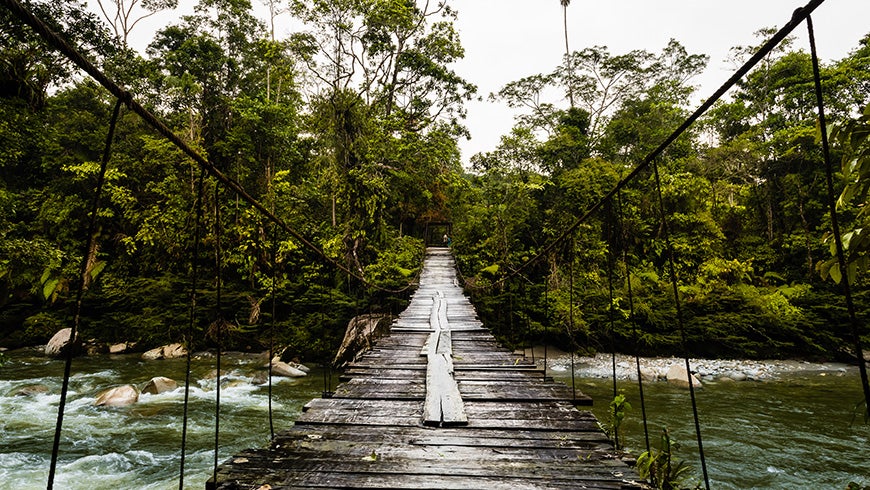 Recovering traditional conservation practices in natural resource management through a self-strengthening process was the goal of this project.

The Bajo Guapi and Río Guají Afro-Colombian communities live in the Chocó Bioregion, a major biodiversity hotspot. Their collective territories thrive due to their strong cohesion and robust self-governance.

Acts of violence from encroaching outsiders, and the new economic and social dynamics that they introduce, have led to displacement, which in turn weakens ancestral practices that conserve biodiversity and sustain life in these communities.

In particular, the women of the Guapi municipality are concerned by the loss of sustainable practices, especially Azoteas, a productive practice that have been passed down by grandmothers to their children and grandchildren.

Azoteas is the agricultural farming of traditional medicinal and aromatic plants in elevated gardens to adapt to climate conditions such as extreme humidity, strong tides, and floods. These practices promote balance in flora and fauna, preserve the integrity of the environment, and are the foundation of their cuisine, traditional medicine, and identity.

One consequence of economic modernisation is a decrease in sustainable natural resource practices among younger generations.

Colombia is one of the world’s ‘megadiverse’ countries, hosting close to 10% of the planet’s biodiversity. With 314 types of ecosystems, Colombia possesses a verdant complexity of ecological, climatic, biological, and ecosystem components – exemplified by its endemic species. Biodiversity is not only important for the nation’s natural heritage and the preservation of globally unique species, it is the foundation for economic development, human welfare, and social equality.

In Colombia, 35% of national territory is titled to and governed by indigenous and Afro-Colombian communities, including 50% of Colombia’s remaining forests.

Based on centuries of experience, local indigenous communities have developed ways of living that promote the balance between the needs of people and the needs of local ecosystems. Their landscapes are a product of daily economic and cultural practices.

Like the rest of the world, Colombia’s biodiversity is threatened by high rates of deforestation, an expanding agricultural frontier, and climate change impacts, to name a few.

In indigenous and Afro-Colombian territories, such threats are amplified by encroachment, forced displacement, illicit crops, and armed conflict, resulting in social disintegration and losses of traditional knowledge and practices. 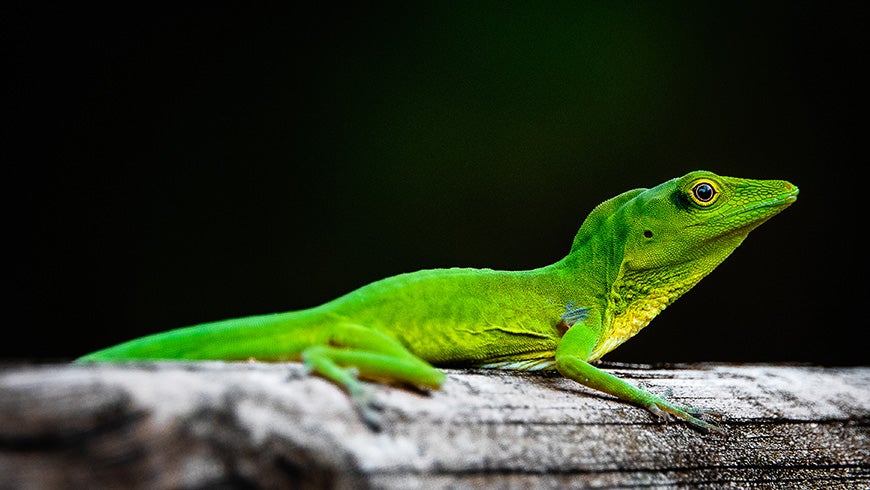 Recovering traditional conservation practices in natural resource management through a self-strengthening process was the goal of this project.

Led by Fundación Chiyangua, an all-women NGO, the communities and leaders of two Afro-Colombian collective territories worked together in building an evidence-based traditional medicine and local gastronomy systems in rooftop gardens. This project promoted a catalytic 'self-strengthening' process of the community members, especially on women and elders. This bottoms-up approach that started in recovering the traditional productive practices has broadened the scale of impact of this women´s organization, influencing territorial planning, decision-making and community behaviour, and once again strengthening solidarity in collective territories for environmental benefits.

Encompassing 7,850 inhabitants and 79,233 hectares, this work led to formalizing sustainable land use planning and zoning processes based on traditional knowledge and practices.

The results of this female-led community work include a complete census of traditional knowledge stewards (85 identified within the community across a wide spectrum of trades and skills); the identification of local species according to their economic, cultural and social importance, including scarce or endangered species that deem protection; and a spatial mapping for collective and individual use.

These efforts have resulted in documenting a repertoire of ancestral practices undertaken in 12 community-identified plots that incorporate rules of care and respect for nature.

Additionally, a compilation of 34 traditional recipes was developed with food from the sea, rivers, and jungles to help preserve the gastronomic memory that these cultures transmit orally. 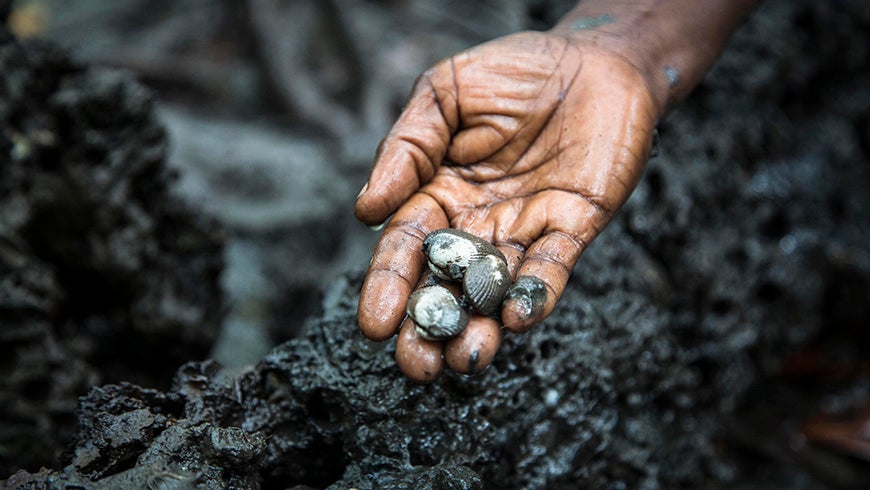 One of SGP Colombia´s strategic areas of support is to territories and areas conserved by indigenous peoples and local communities (ICCA). For this work, Colombia supported 35 projects implemented by the indigenous, Afro-Colombian, and peasant communities themselves, in collaboration with SGP’s partners on the ground such as the Centre for Intercultural Medical Studies (CEMI), an NGO dedicated to fostering the development of intercultural health policies. These projects are exemplars of GEF-funded community initiatives and the Global Support Initiative to Indigenous Peoples and Community Conserved Territories and Areas (ICCA-GSI).

Formed in 2014 to broaden the diversity and quality of governance types in recognizing ICCAs towards achieving CBD 2020 Aichi Targets, the ICCA-GSI is a multi-partnership initiative implemented by the GEF Small Grants Programme (SGP) in 26 countries, with funding from the Government of Germany, through its Federal Ministry for the Environment, Nature Conservation and Nuclear Safety (BMU).

The experience of these projects demonstrate the richness and diversity of community strategies to protect their territories. The solidarity between and within communities strengthens bio-cultural heritage and can revitalize traditional systems, which in turn, preserve biodiversity.

The exercise of self-governance was reinforced through participatory tools. Planning instruments were also put in place - some more traditional and autonomous, others administered by local governments - but all based on community agreement and a highly participatory process that catalyses community management. This process was borne out in the multiple bio-cultural and effective conservation practices, varying from the definition of specific protection sites or large conservation areas, to ceremonies for traditional management and protection in malocas (traditional longhouses), to participatory mapping and zoning, to roof gardens and other production practices, to management plans (among others). These various conservation practices derive their strength from the cultural ownership of natural resources and territory. 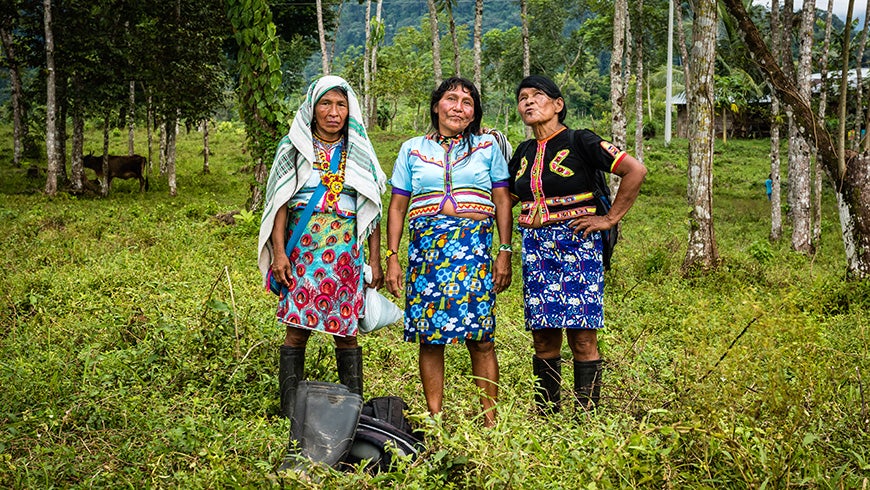 A network of life

Subsequently, a network of community organisations established the TICCA Colombian Network-Territories of life. In their founding declaration in November 2018, participants conceptualised the TICCA Network ‘as the autonomous and collective construction of a community movement to position, strengthen and promote our territories of life -TICCA’.

Together, these projects have achieved:

Click here for more information about the ICCA-GSI - The GEF Small Grants Programme.