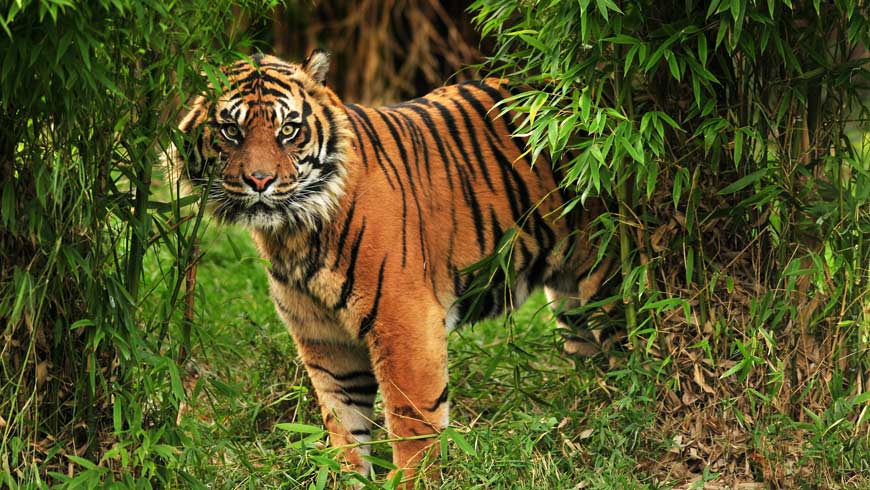 Big cat populations are declining at a disturbing rate due to loss of habitat and prey, conflicts with people, poaching and illegal trade.

For UN World Wildlife Day 2018, the global community is focusing on the theme: “Big Cats – predators under threat”. As such, efforts to protect majestic species like the lion, tiger, cheetah, leopard and jaguar, as well as less well-known ones like the iconic snow leopard are in the spotlight.

Big cats are among the most widely recognized and admired animals across the globe. However, today these charismatic predators are facing many and varied threats, which are mostly caused by human activities. Overall, their populations are declining at a disturbing rate due to loss of habitat and prey, conflicts with people, poaching and illegal trade.

In response to this growing wildlife crisis, the Global Environment Facility (GEF) supports a wide variety of projects and programs, including:

The Global Tiger Recovery Programme (GTRP) – a global alliance of governments, international organizations, civil society, the conservation and scientific communities, and the private sector that aims to reverse the rapid decline of wild tigers and to strive to double the number of wild tigers across the 13 range countries by 2022.

The Global Wildlife Program (GWP) – led by the World Bank, the GWP is a $131 million GEF investment that deploys resources along the entire illegal wildlife trade supply chain in 19 countries in Africa and Asia. It aims to reduce poaching through the engagement of local communities and by conserving and protecting wildlife natural habitats; control wildlife crime and reducing trafficking through effective law enforcement; and reduce demand for illegal wildlife by raising awareness and changing behavior.

As part of its biodiversity strategy, the GEF has been at the forefront of combating illegal wildlife trade. GEF investments have helped address many of the threats to species, including habitat destruction and fragmentation, over-exploitation, and the introduction of invasive alien species.

These, and other GEF supported initiatives are being highlighted on World Wildlife Day:

The World Bank released a new report called “Supporting Sustainable Livelihoods through Wildlife Tourism”.  In a joint foreword for the publication, Naoko Ishii, GEF CEO and Chairperson, wrote: “In some countries, tourism depends almost exclusively on natural systems, often with wildlife as the primary attraction. This nature-based tourism (NBT) is a powerful tool that countries can leverage to grow and bring jobs to local communities, generate government revenues and foreign exchange, and create new markets for entrepreneurs to sell their goods and services. For NBT to flourish, wildlife and its natural habitat must be protected and managed sustainably. To achieve the latter, the design of conservation programs that are socially and economically sustainable will be essential.”

The new publication highlights successful wildlife tourism programs in seven countries in Africa and Asia that can be used as models to promote conservation and boost economies. In an accompanying article, World Bank lead economist Richard Damania answers questions on the drivers, innovations and challenges for wildlife tourism, and why the World Bank Group and governments should support sustainable tourism strategies.

The second one focuses on rhinos, a species under immense pressure from illegal wildlife trade. Demand for rhino horn has reached unprecedented levels. Addressing this challenge requires a targeted and scalable approach that utilizes innovative financing mechanisms to draw on philanthropic and impact investor capital to drive improvements in protected area management effectiveness. The Rhino Impact Investment (RII) program aims to transform conservation by demonstrating an outcomes-based financing mechanism that is scalable - a way to direct additional funds to effectively improve the management of priority rhino populations.

Gustavo Fonseca, GEF Director of Programs, said of RII: “Globally threatened species deserve special attention and priority. At the same time, limits on our funding base demand innovation and ingenuity in the way resources are mobilized to conserve biodiversity at a planetary scale. The RII is one such promising approach to attract impact investors interested in concrete outcomes in rhino conservation. The knowledge being accumulated through the RII can soon be used to address conservation opportunities in Africa and elsewhere.”

UN World Wildlife Day is celebrated every year on March 3rd – the day of signature of the Convention on International Trade in Endangered Species of Wild Fauna and Flora (CITES).