Scaling Up the Pistachio Industry in Uzbekistan 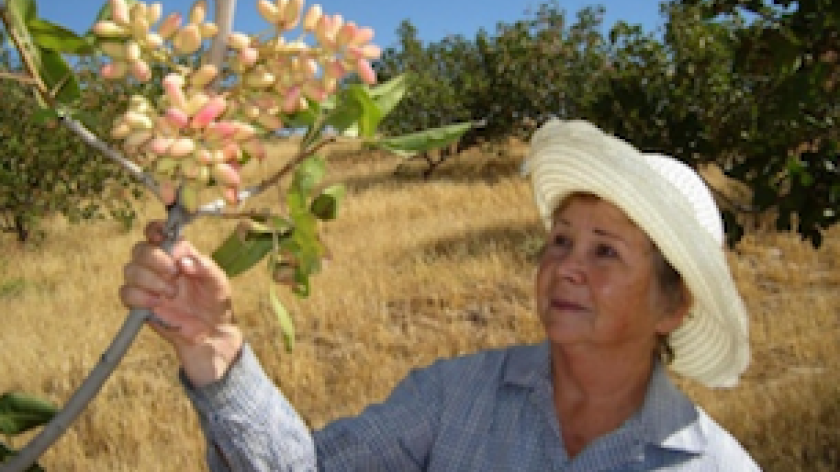 Bastamkul lives in the area of typical arid foothills, with around 300 mm of precipitation annually. There are more than 400,000 ha of such lands across Uzbekistan - 9 out of 12 provinces of the country. People in such areas are usually engaged in rain-fed agriculture, growing oilseed crops or wheat and livestock breeding. The productivity of these lands is very low. Severe overgrazing is a common and widespread problem that wipes out any chance for re-vegetation of any tree and most grass plants. No vegetation is the first driving factor for land degradation and destruction of productive lands and thus leads to loss of income by people.

In 2008, Bastamkul Saidkulov,  approached the GEF Small Grants Programme, implemented by UNDP, asking for help to purchase a few kilometers of pipes to bring water from a distant well to his area so he could plant some trees in the near dry Province of Djizzak. At the time, the National Coordinator of SGP in Uzbekistan, explained how the GEF SGP works, and how the GEF fund can be used only for projects that produce global environmental benefits. However, in an effort to understand the situation of the area and as a result of that meeting, SGP invited a couple of experts from the Forest Research Institute to visit the area and explore what could possibly be done in such dry conditions. This became a turning point that later on translated into large scale intervention of the GEF SGP into forestry in arid zones of Uzbekistan.

A group of experts that had been working on pistachio tree ecology - a tree species very resistant to droughts and dry conditions- suggested pistachio as a possible and probably the only solution for reforestation of this arid foothill zone. It seemed that promotion of this tree species and agroforestry as an approach could potentially become a good alternative to livestock grazing in those fragile arid landscapes.

The group led by Galina Chernova, who has dedicated more than 50 years of her life to pistachio culture, had made many efforts to distribute knowledge about this amazing tree across Uzbekistan but with little success. 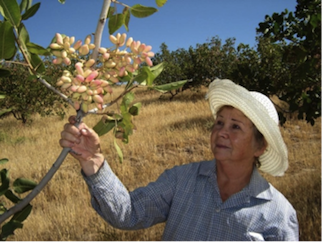 Galina Chernova, who is also known in Uzbekistan as Miss Pistachio

A team of forestry experts together with Bastamkul and local community members started to work on the project design. First, the project aimed to train as many local people living around the Nuratau mountain ridge to start cultivation of pistachio – as the region has the ideal climatic and soil conditions for this tree species. Then the group, advised by SGP, analyzed the reasons why pistachio cultivation did not get wide recognition among people in the past and discovered that people did not want to plant pistachio because they do not want to wait 5-7 years before the pistachio bears fruit. Central Asia, including Uzbekistan, was the birthplace of the species, but Iran and Turkey are the world leaders in pistachio production, even though Uzbekistan has far better conditions for cultivation of this tree. In those countries pistachio is called "green gold". As a result, the group decided to make an emphasis on promoting pistachio agroforestry as a business model for local people stressing its economic profitability.

Once the GEF SGP National Steering Committee approved the project, practical trainings started with participants from nearby villages doing some on-ground work - preparing seeds, seedlings, planting, preparing slots, etc. At least 200 local people were trained directly during formal project trainings. All interested people received a very detailed manual on establishing a pistachio plantation with descriptions and photos published by the project. The project helped to establish more than 50 ha of pistachio plantations.

In addition, the project recruited economists who made cost-benefit analysis were all possible expenses and proceeds were calculated for the first 18 years of the pistachio plantation. It turned out that pistachio is 50 times more profitable than wheat production on these arid lands. Livestock grazing for the whole period accounts only for 4.5% of profit derived from pistachio cultivation. And this did not take into account that pistachio optimal fruiting starts in 20-25 years after planting and can last hundreds of years. Basically, the project studies proved that agro forestry is much more profitable and environmentally sustainable than livestock grazing in the project area.

As part of the project, the information was published and distributed widely across provinces in Uzbekistan with suitable conditions for pistachio cultivation. As a result, a wave of interest arose and the group of foresters received calls from all across the country. The practice was included by a Central Asia regional UNDP project in the WOCAT database as a best practice. 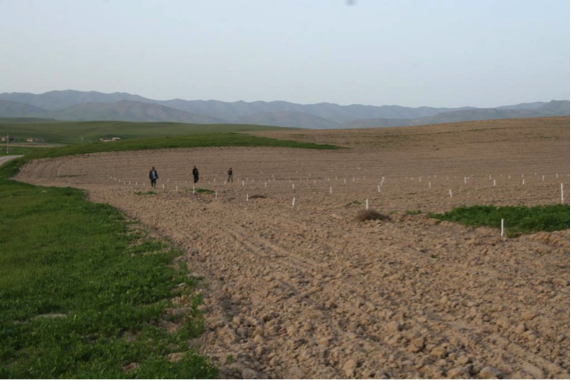 After the initial success, the National Steering Committee of the GEF SGP decided to support similar initiatives on pistachios from other provinces so that people from other regions of Uzbekistan would get to know the practice better. Since then, projects in two more provinces have been implemented. Apart from formal trainings the success story spread rapidly by a word of mouth and even though it is not possible to monitor how many farmers started to use this practice, it is known that farmers in many provinces started agroforestry practices and related businesses. Rough estimations show that a hundred hectares of pistachio plantations have already been established. The Government of Djizzak province alone - the province where the first project was implemented - ruled to allocate 1,000 ha for pistachio plantation in 2013.

The growing interest in pistachio created high demand for the planting materials and forestry suppliers could not meet this demand. From the very beginning the idea of the practice's distribution was based on the belief that all can be done by people themselves, by market mechanisms, without any requests for investments from the side of the Government. But 1 year after the wave of the interest for this practice began it became obvious that the supply of planting and inoculative material could not meet the demand. There was a need to sustain the interest and give additional trigger to the development of this sector by supporting the supply side. 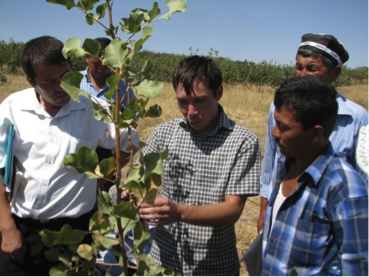 Forestry experts came up with the idea to create a few "points of growth" for pistachio across Uzbekistan. These "points of growth" were plantations containing collections of highly productive pistachio varieties that could sustainably provide planting and inoculative materials to interested farmers as well as provide consultative services. According to forestry experts, 4 or 5 points of growth must be established to satisfy the growing demand. The GEF SGP instantly supported strengthening one of such points of growth that is based on the only and main collection of pistachio varieties in Uzbekistan - Gal Aral collection. As a result of the project a basis for production of additional planting and inoculative materials was established. Right now there is an application to the GEF SGP to create another Point of Growth for Fergana Valley.

The GEF support has played the key and major role in creating a new sector in the forestry industry of Uzbekistan - pistachio plantations. Through several interlinked SGP projects with total GEF funding of 162,000 USD, SGP was able to raise great interest among farmers across the Uzbekistan to establish agroforestry practices that are far more environmentally sustainable than any other land use in such fragile arid landscape. In addition, the practice also creates income and improves the livelihoods of the communities. With a little more support from the GEF SGP to establish necessary points of growth, SGP can ensure the sector will continue developing, bringing lots of benefits to the environment and the people of Uzbekistan.

Since 1991, GEF has achieved a strong track record with developing countries and countries with economies in transition, providing $11.5 billion in grants and leveraging $57 billion in co-financing for over 3,215 projects in over 165 countries. For more information, visit www.thegef.org.

Launched in 1992, GEF SGP supports activities of nongovernmental and community-based organizations in developing countries towards climate change abatement, conservation of biodiversity, protection of international waters, reduction of the impact of persistent organic pollutants and prevention of land degradation while generating sustainable livelihoods.