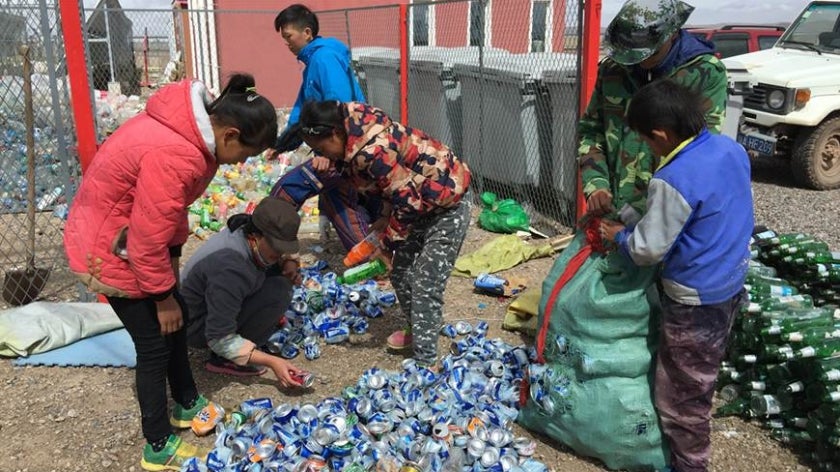 The Small Grants Programme (SGP) supports 565 projects related to chemicals with more than $16 million in funding. Many projects, such as this one in China, focus on solid waste management as a means of avoiding open burning of waste.

The GEF Small Grants Programme (SGP) has launched a new publication and a short animated video on community actions to address the effects of chemicals and waste on the environment and livelihoods.

The publication, “Community-Based Chemicals and Waste Management: Experiences from the GEF Small Grants Programme”, features 10 case studies and lessons learned that demonstrate the innovative solutions developed by communities and civil society to chemicals and waste management.

In Bhutan, the GEF SGP has been supporting the Bhutan Youth Development Fund to establish the first ever and only wastepaper recycling facility in the country to produce sustainable egg trays. Working with youth recovering from drug dependence to promote waste paper collection and management in Thimphu, the project helps reintegrate these youths into society. The facility produces up to 1.3 million trays per year, recycling approximately 100 tonnes of waste paper, which otherwise would end up polluting freshwater rivers, being dumped in a yard, or burnt at the household level. The facility has generated a total income of $20,000 and contributed to sustaining the Drug Education and Rehabilitation Services program of the Bhutan Youth Development Fund. It also helps avoid the use of plastic and other non-recycled egg trays.

Similarly, in Nepal, the Center for Public Health and Environmental Development (CEPHED), with the support of SGP, launched an initiative to influence the healthcare sector and build momentum for the implementation of clear policies. According to the Government of Nepal, as of 2014, hospitals generated 10,520 tonnes of non-hazardous healthcare waste per year and 3,094 tonnes of hazardous medical waste. All this medical waste was disposed of as regular city garbage, which presented a problem for municipal waste collectors. It was also burnt in incinerators which released persistent organic pollutants (POPs), such as dioxin, to the environment. These practices also posed threats to human health.

The project sought to address the unintentional release of POPs to the environment from waste burning at healthcare facilities as well as from open burning, and limit the release of furans and polychlorinated biphenyls by eliminating the use of contaminated transformer oil in welding machines. To achieve this objective, the initiative formed a Waste Management Committee with members of key professional organizations; produced several briefing papers on POPs, PCBs, healthcare waste management systems and mercury-free healthcare; provided training on the subjects; and started an awareness raising campaign that produced over 100 news articles on the subject including coverage of several national news channels.

For demonstration purposes, three hospitals received installation of full waste management systems. They were recognized as model hospitals, and used for knowledge transfer on best practices in medical waste management. To mitigate the release of PCBs and POPs emissions from the steel industry, three model metal workshops were selected and outfitted with dry welding machines. The new technology eliminated the need for use of contaminated transformer oil and subsequent emission of PCBs, and avoided the release of dioxins and furans. Obsolete pesticides and POPs were sent back to Germany to be disposed of safely.

The GEF SGP focuses its support to communities at the forefront of chemical threats either as users or consumers, including women and indigenous peoples. These communities are particularly vulnerable to the threat of chemical contamination as they may lack awareness and access to information about harmful chemicals, and may not participate in all aspects of decision-making related to the sound management of chemicals.

To date, SGP has supported 565 projects related to chemicals and waste with an investment of more than $16 million in GEF grant funding, leveraging more than $18 million in co-financing. SGP’s chemicals and waste portfolio has focused on solid waste management to avoid open burning of waste; pesticide management in agriculture and organic farming; reduction of chemicals usage and contamination in small-scale businesses; and on capacity development, awareness raising and knowledge sharing.

The world has witnessed a drastic increase in chemicals production and use. According to UN Environment, since 1970, chemicals sales increased from US$171 billion in 1970 to over US$4.1 trillion in 2012.

Over 1,600 representatives from more than 180 countries as well as observers including from civil society groups and the chemical and waste industries are gathering in Geneva to discuss measures to promote the sound management of chemicals and wastes.

The two week-long Triple Conferences of the Parties (COPs) to the Basel, Rotterdam and Stockholm (BRS) Conventions aims to strengthen the three international treaties contributing to the global management of hazardous chemicals and waste.