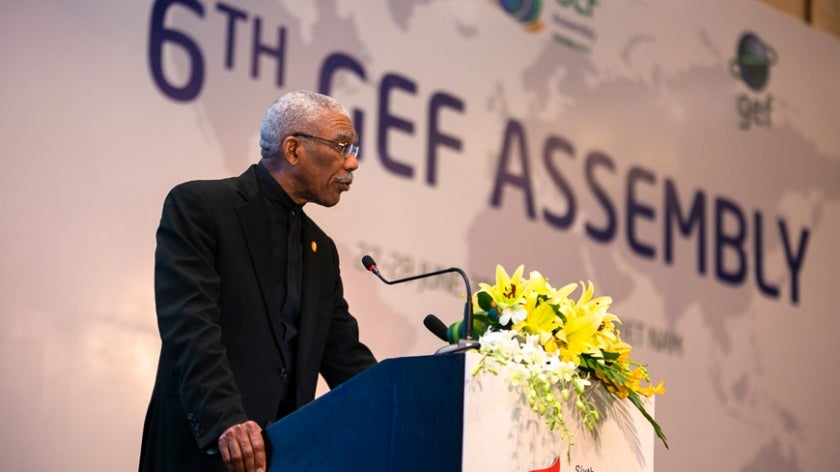 GEF Assembly discusses how the GEF can accelerate systems change

“Transformational change” will be needed if humanity is to avoid environmental “catastrophe”, President David Granger of Guyana today told the closing session of the Global Environment Facility's (GEF) Assembly in Da Nang, Viet Nam. But he added that the meeting  had convinced him that a “new day is dawning for the global environment”.

President Granger was the third head of government to address the GEF's Sixth Assembly, attended by 1,200 people, including  ministers and other representatives from all the GEF's 183 member countries. President Hilda Heine of the Marshall Islands and Prime Minister Nguyen Xuan Phuc, Prime Minister of Viet Nam, spoke at the opening session yesterday, along with heads of UN agencies and top businessmen, bankers and scientists.

President Granger said that the meeting had recognised “the necessity and urgency of 'delivering transformational change' to confront the challenges to the Earth's environment,” adding that it's “conviction is that incremental change, while necessary, will not be sufficient to avert environmental catastrophe.

“Change must be comprehensive. The Global Environment Facility  - the world's foremost institution for financing environmental change – must aim at 'delivering transformational change' by forging not only global, but also regional and local partnerships”.

He described how Guyana had set aside thousands of square kilometres of rainforest for permanent conservation and added: “Global environmental threats cannot be resolved only by the existing level and current rate of everyday responses. International environmental cooperation must continuously seek comprehensive and cohesive solutions to stubborn, unchanging and deteriorating situations.

“This Sixth Assembly – by identifying the prevalence and persistence of climate change, deforestation, land degradation and water pollution, and by proposing responses to these challenges, emphasises the need for deeper and different approaches to international environmental cooperation.”

He said that the GEF “is ideally suited to promote international environmental cooperation” and said he had been convinced by the meeting in Da Nang that “a new day is dawning for the global environment”.

He concluded “This Assembly's momentum must not be slowed. The challenge of 'delivering transformational change' at all levels and in all zones must be embraced in the days, months and years ahead. There is no alternative earth. Eternity, no less, is what is at stake.”

Naoko Ishii, the GEF's CEO and Chairperson, said that the two-day meeting had been “full of discussion about how the GEF can best accellerate change”, adding: “One clear message was that we must de-silo ourselves. We need to build broad coalitions of diverse stakeholders who share the same goal and who work together to get things done.”

She concluded: “I am convinced, and the Assembly has convinced me even more, that the GEF can play an extremely useful and important role to catalyze the change we need”.

And Tran Hong Ha, Viet Nam's Minister of Natural Resources and Environment, who chaired the meeting, said that it had “reached important agreements on solutions to the global environmental issues”, adding: “I am inspired by the enthusiasm and commitment shown by all of us in joint efforts to address pressing problems, particularly those related to emerging issues, such as marine plastic waste, loss of biodiversity and climate change.

“Let us work closely to turn the agreements reached in these meetings into actions for a more resilient, sustainable and life-affirming planet, for current and future generations”,

Earlier a distinguished panel of ministers, senior government officials and other experts reported on the conclusions of 14 “round tables” held over the two days to address: Food, Land Use and Restoration; Sustainable Cities; the Blue Economy; Partnerships for Implementing the 2030 Agenda; Science Based Targets for Earth; the Circular Economy; Marine Plastics; Sustainable Landscapes in the Amazon and Congo Basin; Wildlife; Gender and the Environment; Innovation in Clean Energy; Conservation Finance; Sustainable Drylands; and Preventing a Toxic Legacy – Transforming the Chemicals Industry.

The panel agreed that the issues needed to be translated into language that both the public and policymakers understood in order to engage them. Gail Rigobert, Minister of the Environment of St Lucia, called for the use of “language that is palatable and resonates with people”. Jillian Blackbeard, Executive Director for Marketing  of the Botswana Tourism Organisation said that it was essential to secure widespread “buy-in” and Atle Hamar, State Secretary in the Norwegian Ministry of Climate and Environment spoke of the importance of a “community strategy”.

They also concurred that new, and more flexible, finance was needed. Carlos Manuel Rodriguez, Costa Rica's Minister of Environment and Energy, noted that the world spent only $55 billion on conserving biodiversity, less than on ice cream, even though returns on investment were good. And Patrick Dlamini, CEO of the Development Bank of Southern Africa – who called the GEF his “rock star” - spoke of the need for blended finance and risk capital. 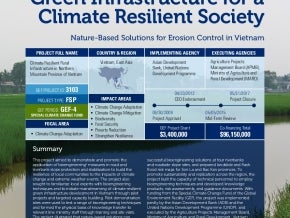 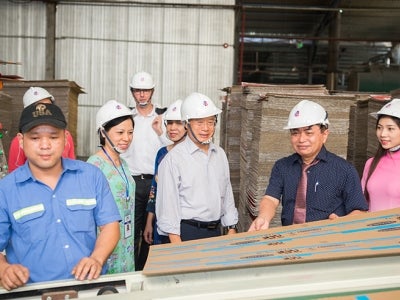