Coming to grips with water: How Bhutan is overcoming water challenges magnified by the onset of climate change For Phub Zem Doya, living in the remote village of Singye in southwest Bhutan, water is a precious resource – one not to be taken for granted.

In her village, climate change has led many water sources to dry up, causing shortages particularly during the dry winter season.

Until recently, having enough water for the family meant making several two-hour hikes uphill through thick forest each day to the nearest spring. The extensive time required to fetch the water resulted in strict rationing of its use, with drinking and cooking accorded the highest priority, followed by cleaning of utensils. Maintaining proper hygiene and sanitation on top of that was simply impossible.

Meanwhile for Pema Dradul and his community living in Pasakha, climate change has presented the inverse challenge: their houses are near a river that rises each year during the rainy season. With climate change, floods have become more serious and frequent.

The impacts of climate change on Bhutan

The land-locked country is exposed to a wide range of climate change-induced threats, including glacial lake outburst floods (known as ‘GLOFs’), flash floods and landslides, windstorms, forest fires, and seasonal water shortages (affecting not only people’s consumption, but also the viability of livestock and agriculture).

Climate change is not solely driving more extreme weather events, it is also having a direct impact on the people who rely on subsistence agriculture.

In recent times, due to warmer temperatures and unpredictable precipitation, some pockets of rural settlements have faced severe challenges in terms of water resources. Erratic and extreme rainfall during monsoon seasons, coupled with the country’s alpine topography, are posing serious risks of landslides and floods in many parts of the country.

As a result of water shortages, women tend to face greater hardship than men, because women have traditionally been responsible for water-dependent household duties, such as cooking, cleaning, and providing sustenance for children.

Recognising these climate-induced hazards, the Government of Bhutan and the United Nations Development Programme (UNDP) partnered and developed Bhutan’s National Adaptation Programme of Action (NAPA, 2006), updating it in 2012 to incorporate new emerging hazards.

Since then, UNDP has partnered with the Government to formulate and support the implementation of climate change adaptation projects, based on identified priorities. With funding from the GEF-Least Developed Countries Fund, the first NAPA project, focused on reducing risks associated glacial lake outburst floods, was implemented between 2008-2013, the second NAPA project from 2014 to 2018, and the third under implementation since 2017.

The project has made great strides. By partnering with the Tarayana Foundation, a local NGO, the project supported the construction of a climate-resilient water harvesting, storage and distribution system benefitting over 1,000 households in the districts of Pema Gatshel, Tsirang, Mongar, and Samtse.

The rural communities of the four districts now have improved water supply sufficient for household uses, as well as for livestock and agriculture.

Women and children have been the first beneficiaries, as they no longer have to endure long walks to fetch water. In turn, this has allowed many children to go to school regularly, and women are able to undertake extra income-earning activities in their new free time.

The installation of a tap right next to Phub Zem Doya’s house was a huge step forward. Having ready access to running water transformed not just her daily routine – including her capacity to maintain proper hygiene and sanitation in her household – but also resulted in opportunities to earn extra income in the time saved.

The improvement was marked also for Karma Lhamo, a farmer living in Tongshingang municipality: the new availability of water virtually on her door step meant she could maintain a kitchen garden as well as cattle rearing – activities previously not possible.

“In the past, women and children walked for hours at night with burning torches to fetch water. Because of the time required, our children were unable to go to school, we could not main proper hygiene at home, and most women faced hardship in carrying out their daily household chores. Today, our lives have changed drastically. Sanitation and hygiene conditions have vastly improved and since we no longer need to spend many hours fetching water, we can spend more time earning income.” 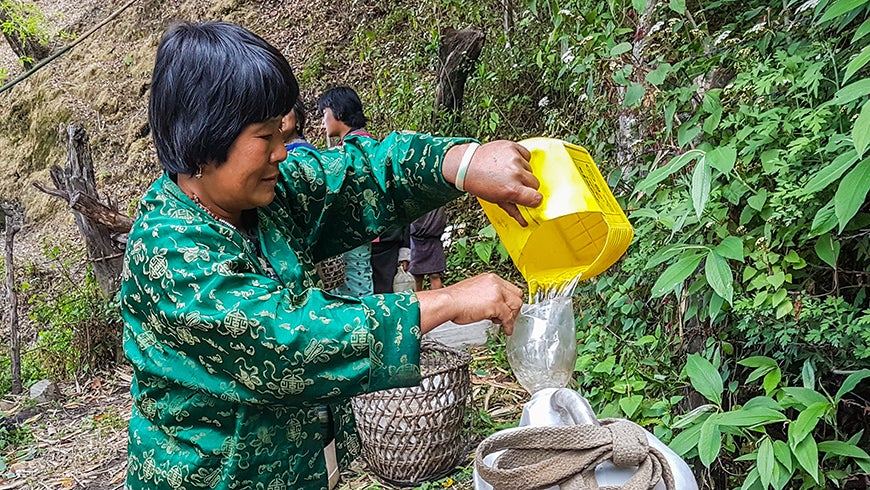 Similarly in Mongar town, one of the country’s poorest regions with a persistent water scarcity problem, the project supported the construction of a new storage and distribution system benefiting over 6,000 households.

“Until a few years ago, residents could hardly sleep at night during monsoon seasons, especially when we experienced incessant rainfall. Today, we can sleep peacefully with assurance that our colony is now well protected from floods.”

Adapting to the future of climate change

Climate change adaptation continues to be a priority for the Government and has been given due emphasis in its current Five-Year Development Plan.

Bhutan has also highlighted climate change adaptation in its Nationally Determined Contributions (NDC) submitted to the UNFCCC in 2015, with enhancing water security as the leading adaptation priority.

Bhutan is now prioritising long-term planning for climate change adaptation. With support from the Green Climate Fund and UNDP, the government will launch the National Adaptation Plan (NAP) Project in early 2019. The goal: to help the country build a stronger evidence base for adaptation through comprehensive assessments – looking especially at the issue of water, building of scenarios, study of indigenous and emerging adaptation interventions, and a stronger investment case for scaling-up adaptation.

With planning and action, Bhutan is readying communities for a changing climate.

This story was originally published on Exposure by Climate Adaptation UNDP.

Enhancing sustainability and resilience in Bhutan