People gather in a communal vegetable garden around Jappineh village in The Gambia’s Lower River Region to watch a drama about climate change. Jappineh is one of 14 pilot sites benefiting from a UN Environment Early Warning System project that helps to spread information about climate change and weather shocks by supporting a communications network including mobile phones, radios, loudspeakers and theatre. Photo: Hannah McNeish/UN Environment

When Bundauda Samasa was a boy, everyone knew to the day when the rains would start and stop sprinkling the fields in The Gambia’s Upper River Region, and what harvest of groundnuts, vegetables, rice and pulses to expect.

Now standing in his bleached, patchy fields skirting Dingiri village as donkeys pick at the odd tufts of straw, kicking up clouds of terracotta dust, 57-year-old Samasa yearns for the days when life was predictable because the seasons didn’t change.

“The 15th of June was when the rains would come, and you planted your seeds around that,” recalls Samasa.

“Now the rains have shifted, starting late and not allowing us to know when we can plant and whether there will be enough water for what we’ve sown.”

Bubu Jallow, a meteorologist and one of The Gambia’s leading climate change negotiators, says that climate change adaptation projects are vital in a country where he estimates half of the land is degraded due to poor land management and climate change impacts such as increasing temperatures and drought.

Jallow says that in the 1960s, there was enough rain for Gambian farmers to cultivate rice, the country’s key subsistence crop, twice a year. But now, with three quarters of the population still reliant on farming for their livelihoods, changing rainfall might mean no rice harvest at all for many, as well as little chance of growing groundnuts – the nation’s main cash crop.

Deforestation has also contributed to reduced rainfall, while allowing storms and flash floods to wash away fertile soils, bringing gradual desertification as sands roll in and turn once-rich farmland into uncultivable dunes.

“Unfortunately, due to population growth and demand for urbanization, we have lost 97,000 hectares of forest land – from [a total of] 523,000 hectares – since 1997,” says Lamin Dibba, The Gambia’s Minister of Environment, Climate Change and Natural Resources.

But over the past few years, UN Environment has been helping people in this small West African country to better understand the changing climate, and arming them with information on how to adapt to it. 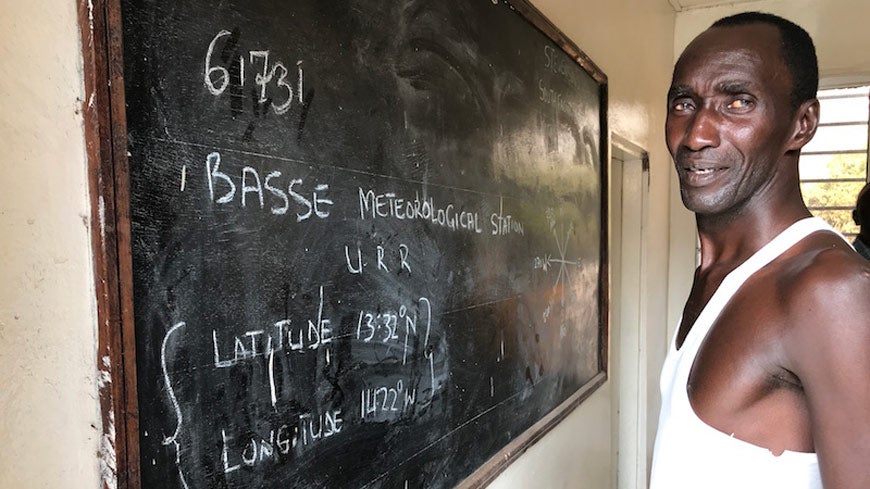 With the support of the Global Environment Facility-managed Least Developed Countries Fund, UN Environment has improved access to climate information in The Gambia, while building local understanding of how to put this information to use. Under the $29.5 million project, media and meteorological stations have been provided with training and equipment, while communication networks have been improved in local communities – enabling farmers to receive and act on vital weather alerts.

Nine meteorological stations have now been constructed across the country, equipped with automatic forecasting equipment and access to a mobile network that sends data from the regions to a central forecast office at the airport in the capital Banjul every 30 minutes.

With the added help of a new tower, transmitters and lightning detection systems at the airport – alongside better training and equipment – staff here now have all the information at their fingertips to produce reliable forecasts that reach across the country.

Staff from The Gambia’s national broadcaster and six community radio stations have also received training and equipment to help them share information about the changing weather.

The few journalists operating out of a one-room radio station located in the town of Gunjur, just a few kilometres outside the capital, are now helping fishermen to make informed decisions about when to venture out to sea, and when to stay home and avoid the storms that can lead to disaster.

“When we are fishing, we come across dead bodies of people who have had some accident at sea. It happens a lot,” says Nyange Toure, president of a fishermen’s association in Gunjur.

Sitting under a shade with fellow fishermen mending nets and listening to the radio after a morning’s work, Toure recalls one incident in which around 50 Gambian fishermen went out to fish in the traditional wooden canoes and all came back with their fishing gear destroyed.

“The sea can change so quickly and can be very unfriendly”, he says.

“Before listening to the forecast, we used to have a lot of losses – mostly of gear but sometimes lives. Now we have the forecast we know what will happen and wait to see what is coming, so I save a lot of my time and money now by not going out when it’s bad weather.”

Fourteen pilot villages across the country have benefited from the donation of mobile phones, radios and loudspeakers, which are being put to use by local volunteers who have been trained to deliver messages about climate change and weather forecasts through meetings, door-to-door visits and theatre.

Just outside the village of Jappineh in The Gambia’s Lower River Region, volunteer Jainaba Saidy is weeding her neat rows of cabbages in a community vegetable garden as the sun sets behind huge baobab trees.

“We’ve had a lot of difficulties because of weather phenomena. We have been taught that the climate is changing and we’ve seen in our own lives how it’s affecting us, so now we are planning so that we can cope with it,” she said.

Saidy says that having more information about the changing weather has persuaded people not to rely solely on rain-fed agriculture and staple crops like maize and rice, but to grow a diverse range of crops in a garden irrigated by a communally funded solar-powered system.

“The information I give out relates to water shortages, like rainfall and drought, and the need to find other ways to supplement our income, like with this garden,” Saidy says.

Now conscious of the shorter rains and when they are coming, people know when to sow their crops and which varieties to plant to ensure they get a harvest, says Saidy, wiping her hands and picking up her loudspeaker to gather people round for a drama performance and songs about the climate.

For farmer Samasa, life has definitely got harder due to the changing climate, but having the predictions makes it bearable.

“Now, what we really need is to know when we do our planting, and the weather forecast really helps us to know this,” he said.

Weathering the storm of climate change in The Gambia