Supported by the Global Environment Facility and Canada's Climate Change Adaptation Facility, this project seeks to provide alternative livelihoods to Niger's population as a means of building resilience.

Halima Ousseïni is just 16 years old. The world should be hers. Yet, living in the village of Tanout, Niger, where climate change impacts, political instability, gender inequality and poverty are commonplace, life is not easy for Halima.

Halima had to drop out of school after two years of secondary school. By the time she turned 16, her future was caving in. In a country where three out of four girls is married before the age of 18 - many girls in Halima’s village were already pregnant, and like many people affected by climate change and the brute force of poverty and inequality, Halima was out of options.

But then Halima learned about a new sewing cooperative in her village – a place where single women, women with disabilities, and other girls could find a second chance.

The sewing cooperative was established as one of 18 “micro-projects” within the UNDP-supported Building Climate-Resilience and Adaptive Capacity in the Agricultural Sector of Niger project, financed with a US$3.5 million grant from the Global Environment Facility Least Developed Countries Fund and US$2.5 million in scaling-up funding from the Government of Canada through the Climate Change Adaptation Facility.

“I was excluded from school and was doing nothing when I learned through a friend that the project had opened a sewing center to allow women and girls to learn sewing,” says Halima. “I was interested and so I enrolled in the center. Since I have been here, I have learned a lot. To sew clothes for myself, for my parents and even for clients.”

But what does sewing have to do with climate change? In Niger, recurring droughts, inconsistent rainfall patterns and other weather-related stressors are impacting the overall stability of the country’s economy. People are forced to migrate, tensions rise, and women – already a marginalized group – are further cast to the side. Sewing provides an alternative livelihood, and an opportunity to make a living and reduce poverty doing something not dependent on changing climatic conditions.

Mrs. Hadizatou Ebiliki is confined to a wheelchair. Not an easy place to be for a woman whose husband regularly needs to migrate to find agricultural work. With limited mobility and opportunities, she could easily have ended up begging in the streets. But Hadizatou is no victim. Despite the hand she has been dealt, she proves that hope springs eternal when women are given the tools, training and assets they need to build more resilient livelihoods. Hadizatou is now the president of a collective seamstress group that is making major progress in breaking down gender lines and building climate-resilience income streams in Aderbissanat, Agadez region of Northern Niger.

"At the beginning, we had a lot of difficulty operating our business. We didn’t have the equipment we needed. Then the project built this nice facility, and gave us training and materials to support us. This support has naturally enabled us to increase our services and improve our incomes. You see that I am a handicapped person, but I am fully in charge thanks to my sewing activity,” Hadizatou says.

There were just a dozen women in Hadizatou’s cooperative to start. Now, some 40 women work in the workshop, with more hoping to join and other small seamstress operations popping up throughout the region.

The most important thing about Hadizatou’s seamstress collective is that the young women that work here have a shared interest in its success. A joint fund that Hadizatou helps manage is collected from the cooperative earnings. With this small 10 percent fee, the cooperative has been able to purchase their own plot of land and ensure a permanent location for their business. They are even building savings to invest in new sewing machines and new materials.

“I am comfortable testifying that the women who work in our center have acquired a certain independence since they are not waiting for their husbands to help them buy clothes or cosmetics,” Hadizatou says.

The outcomes from this project worked toward fostering food security and ensuring better ecosystem-based natural resource management. While new climate-resilient seeds, planting techniques and irrigation equipment fostered improved production on the farm, the project was also careful to support farmers in building the land and water resource management practices necessary to protect the earth from changing weather, droughts, floods, desertification and more. 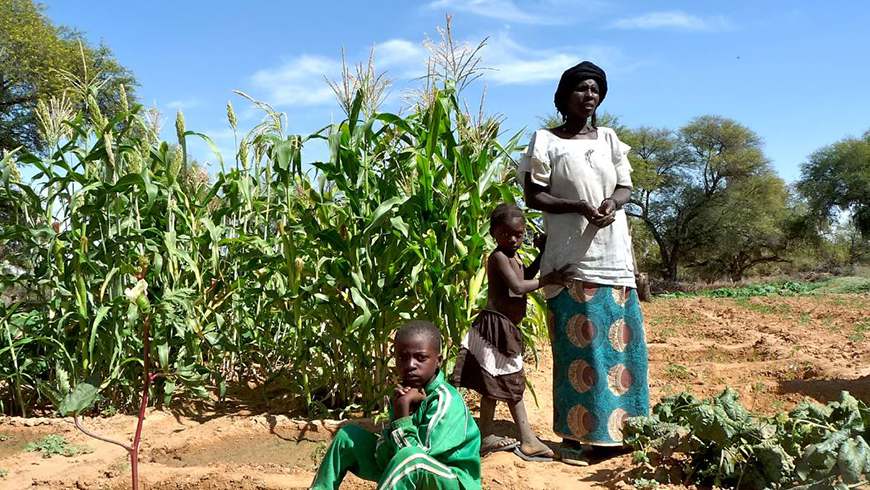 Some of the major outcomes achieved through the project are especially noteworthy. Agricultural productivity skyrocketed in many areas where improved climate-smart seed-and-pesticide kits were delivered, moving production from around 300kg per hectare to 800 to 1200kg per hectare. Planting cycles were reduced from 120 days to just 60, and the use of fertilizers was reduced.

In all, more than 20,000 households in all eight intervention communities saw increased incomes. The farmers in the community of Tondikiwindi, in the Tillabery Region, reported income increases from around US$200 a month to over US$330 a month, a 65 percent jump.

“In the end, whether it’s a small increase from selling a scarf, or a huge jump derived from a newly installed irrigation system and improved seeds, the idea behind climate resiliency efforts like these is to fortify all aspects of society and the economy, diversify income streams, and empower women to become powerful agents of change,” said Clotilde Goeman, UNDP Regional Technical Advisor.

Just think of the village of Loga, in the Dosso Region, where women working in a cooperative producing squash were supported in finding new markets to sell their produce. By going beyond simple consumption, the women are making more money, all the while providing a valuable staple for their families to eat.

"Since we have been doing this market gardening, our status has changed. We are no longer seen as simple consumers who expect everything from their husbands. We also contribute to the care of our families because part of what we produce is directly consumed and the other part is sold. In the end, we invest the profits that we earn in the other expenses of our families," says Zara Mali of the Sargagui Market Garden.

Along with 450 other women producers, Zara is now making extra income that she can use to feed her family, send her kids to school and create the independence that transforms women from girls interrupted to women of power and action.