Why this decade is make-or-break for nature 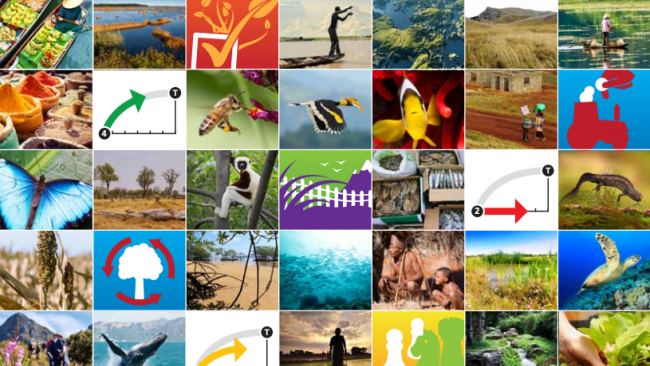 The CBD's Global Biodiversity Outlook summarizes the state of nature and outlines a combination of achievable actions to protect biodiversity, ecosystems, and nature's contributions to people. Image: CBD

Momentum to reverse nature loss is growing, but there is still a long way to go

In evolutionary time, a decade is but a flick of nature’s eyelid. That makes the rapid depletion of biodiversity over the past 10 years all the more distressing. Our forests are disappearing, our coral reefs are dying and our oceans are filling up with plastic.

It wasn’t supposed to be this way. The 2010s were supposed to be the “Decade on Biodiversity”, with the world’s nations championing an ambitious plan of action set out by the United Nations Convention on Biological Diversity (CBD) at a conference in Aichi, Japan, at the beginning of the decade.

In a sobering progress report released today, the CBD concedes that not a single one of the Aichi Biodiversity Targets has been met. Just as worrying, the fifth edition of its Global Biodiversity Outlook concludes, the pressures driving the “unprecedented decline” in biodiversity are intensifying.

It is easy to give in to despair. But we can’t. To give up on fighting to protect the world’s natural resources, including the rich tapestry of biodiversity it supports, would be to consign the planet to ruination and humanity to poverty, hunger and worse besides.

Fortunately, it’s not too late to turn the tide. Yes, nature is at a tipping point, but protecting, even regenerating what we still have is possible, and in some places already happening. It won't be easy. Yet, with the necessary political and societal will, we can create a nature-positive world in which we give back more than we take.

The question is, does such will exist? A year ago, I might have said no. But in the 10 months since I’ve led Business for Nature, a global coalition of influential organizations and forward-thinking businesses calling to reverse nature loss this decade, I have seen momentum on these issues grow exponentially.

As today’s CBD report clarifies, there is more work to do. The levels of government ambition and action remain “generally poorly aligned” with their public commitments to reversing nature loss. But I believe this could at last be changing. Most immediately, the COVID-19 pandemic has woken the world to the convergence of today’s global emergencies. Crises of human health, nature, climate change, social inequality: all are interconnected and, as such, must be addressed together.

Public awareness of the perilous state of our natural world is also growing. As WWF’s recent Living Planet Report shows, wildlife populations have declined by two-thirds in the past 50 years as a result of environmental destruction. As such numbers hit home, public pressure to act is increasing.

The effects are evident in the post-pandemic recovery packages being presented by governments. Pakistan is hiring out-of-work laborers to plant trees, for example, while India has earmarked $780 million for a rural and semi-urban afforestation program. In Europe, the “Next Generation EU” recovery plan will direct 30 percent of its €750 billion (£694.5 billion) budget towards green initiatives. The deal includes a commitment to reduce chemical pollution by increasing organically farmed land by 25 percent.

As importantly, we’re also now seeing business step up to the plate, committing, acting, and advocating for nature. At Business for Nature, we know of at least 530 major companies that have made ambitious and time-bound commitments to help reverse nature loss. More than double this figure are acting by reducing their negative impacts on nature, investing in protecting and restoring nature, and scaling up products and technologies with a lower impact.

Each of these hundreds of businesses, whatever their moral or ethical stance towards nature, recognizes that protecting it has a compelling economic justification. Indeed, forward-thinking companies understand that healthy societies, resilient economies, and thriving businesses rely on nature. Businesses may “produce” the food we eat and the clothes we wear, but it’s the world’s forests, rivers, oceans, and soils that ultimately provide – and each and every one of us who ultimately use and benefit from these precious resources.

Run the numbers and this reality becomes starkly clear. WWF estimates that the cost to business of continued biodiversity depletion could be as much as £8 trillion over the next 30 years.

There’s also a positive flipside. Looking after nature, and after the world’s global commons, makes good business sense and offers us a real opportunity to “build back better.” Shifting to more sustainable agriculture, coupled with forest protection, for instance, could unlock more than $2 trillion per year in business value, while the World Economic Forum estimates that investing in “nature-positive” solutions could create 395 million jobs by 2030.

Individual businesses can only do so much to reverse nature loss, however large or well-meaning they may be. True change will come down to shifting the overall rules of the game so that polluters are penalized, and pro-nature practices are incentivized.

Those who set the rules are governments, which is why Business for Nature is calling on companies to urge politicians to adopt policies now to reverse nature loss in this decade. The Nature is Everyone’s Business campaign has already gathered the support of 560 companies from around the world with combined revenue of $4 trillion. There is still time to show your support and sign up.

The next decade is make-or-break for nature and biodiversity. It will pass in the blink of an eye. The COVID-19 emergency has shown us just how vulnerable our systems are. It’s also been a reminder that humanity is great at problem-solving through collective action and multilateral collaboration.