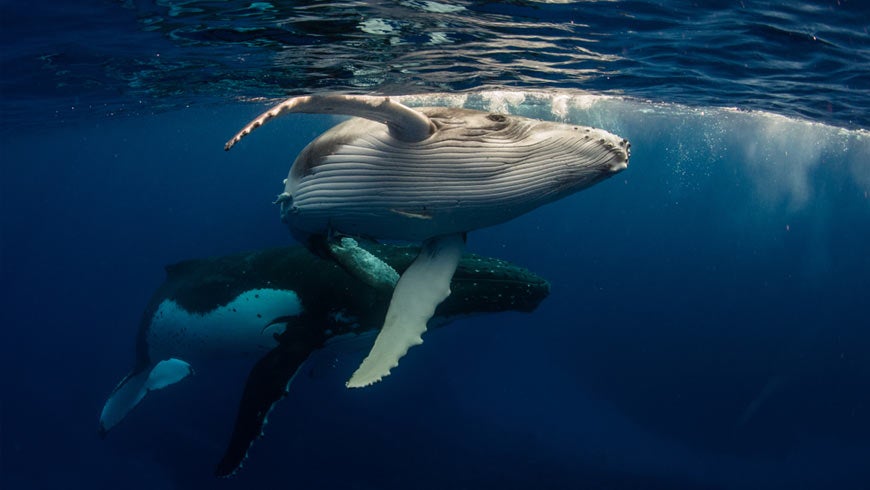 “Fish carbon” is a term used to describe the carbon interactions of all marine vertebrates that contribute to the oceans’ carbon sequestration: turtles, sea birds, mammals such as whales and dolphins, and fish such as sharks, tuna and sardines. These interactions or mechanisms are the natural life processes of marine life that enable capture of atmospheric carbon, allow carbon storage in benign form deep in the ocean, and provide a potential buffer against ocean acidification.

Recent science has revealed that the natural, biological processes of whales can help trap carbon dioxide from the atmosphere and reduce climate change. These processes are commonly referred to as “whale carbon” and they can take different forms.

Whales are also big and long-lived. This means they store a lot of carbon in their bodies, and for long periods of time. When they die and sink to the ocean floor, they bring all of that trapped carbon with them where it can remain buried for millennia.

“Whales feed deep in the ocean and return to the surface to breath, digest, and, well… poo,” said Heidi Pearson, a marine biology professor at the University of Alaska Southeast and Fulbright Scholar at UN Environment/GRID-Arendal.

“The buoyant fecal plumes produced by whales are rich in the nutrients that phytoplankton need to grow and thus, importantly, absorb carbon dioxide in surface waters, allowing for more carbon to be naturally drawn into the oceans from the atmosphere.”

Much work remains to measure the value of whale carbon and harnessing it for climate change action. However, the majority of countries that have endorsed the International Whaling Commission resolutions clearly indicate that there is great potential interest in the role that whales and other marine life can play in combating climate change.

“Recognizing the role marine life may play in mitigating climate change may help small island developing states, especially those who are large ocean nations, include ocean actions in their Nationally Determined Contributions under the Paris Agreement,” says Ronald Jumeau, Permanent Representative to the United Nations and Ambassador for Climate Change for the Republic of Seychelles.

“Seychelles believes that the sustainable management of life in our ocean is critically important in our fight against climate change. Given the dire warnings from the recent Intergovernmental Panel on Climate Change (IPCC) report, can we afford not to explore this option.”

One of the International Whaling Commission resolutions encourages member states “to integrate the value of cetaceans’ ecological roles into local, regional, and global organizations on biodiversity and environment, including climate change.”

Coastal and marine ecosystems, including mangrove forests, seagrass meadows and saltwater marshes, support livelihoods and wellbeing across the globe. These “blue forests” are vital for coastal and island communities through the many services they provide, such as shoreline protection, providing essential habitat for fisheries and supporting marine biodiversity. They are also significant for our global climate by storing and sequestering atmospheric carbon, giving them additional value and significance in the global climate challenge.

The GEF's International Waters focal area is enabling the Blue Forests Project to provide the first global-scale assessment of the values associated with coastal carbon and ecosystem services, to achieve improved ecosystem management through recognition of these values. The project also improves knowledge for informed decision-making, raises awareness and fosters cooperation among all stakeholders. Upon completion, the project will provide experience and tools for greater global application.

The fish carbon concept has been recently profiled through an innovative Fish Carbon Video and Oceanic Blue Carbon Story Map, launched at the Eye on Earth Summit, held in Dubai over 22-24 September. “Through partner co-finance, from Blue Climate Solutions, a project of The Ocean Foundation, and GRID-Arendal, the Blue Forests Project is helping to explore the value of carbon beyond the coasts,” says Lutz.

“This work contributes to the outcomes of the Blue Forests Project and our Blue Forests Joint Strategy with UN Environment. Given that over 50 countries already recognize coastal ecosystems in nature-based climate change adaptation and mitigation actions in their Nationally Determined Contributions, this work reveals the exiting potential to include the sustainable management of fisheries and charismatic megafauna in such actions,” he says.

Marine ecosystems expert Gabriel Grimsditch adds: “The work on fish carbon enhances our knowledge of carbon fluxes in the ocean, and the role that megafauna can play in the global climate. The video introduces the concept and the story map illustrates the science behind fish carbon mechanisms.”

GRID-Arendal is a Norwegian foundation committed to supporting environmentally sustainable development by working with UN Environment and other partners, and through a mission of creating environmental knowledge that encourages positive change.