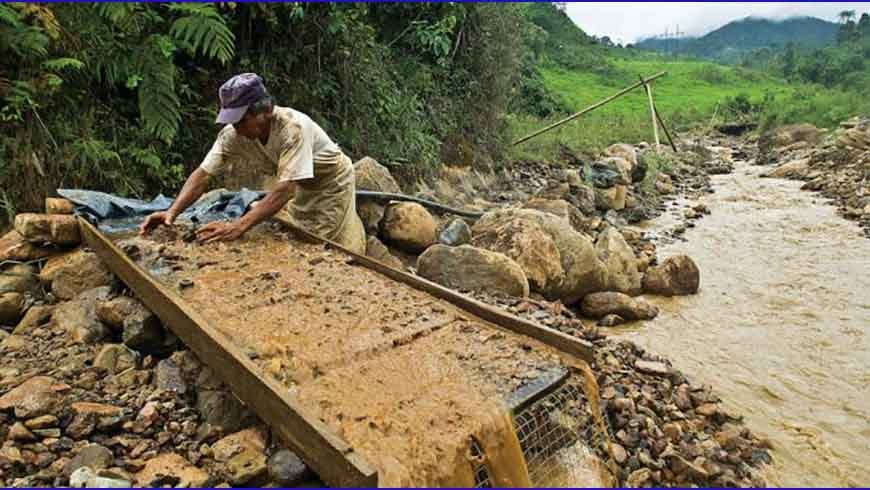 Mercury mining exposes up to 15 million workers and their families in over 70 countries to being poisoned. Photo: UN Environment.

Almost 150 countries, 94 of them Parties to the Minamata Convention of Mercury, are meeting in Geneva this week to strengthen their efforts to reduce and eliminate the adverse effects of mercury as a new report reveals that global mercury emissions into the atmosphere rose by around 20% between 2010 and 2015. Mercury is a serious pollution threat and very dangerous to human health and the environment.

More than one year after its historical entry into force, the Minamata Convention on Mercury, hosted by UN Environment, holds its second Conference of the Parties (COP2) in Geneva, Switzerland. COP2 will aim at strengthening the recently established Convention, while countries update the various strategies to address this heavy metal pollutant throughout its life cycle.

In 2017, countries at COP1 committed to tackling this neurotoxin. Thousands of tons of mercury are released into air, land and water through human activity, including coal burning and artisanal and small-scale gold mining.

Once in the environment, it enters the food chain, accumulates in the body and can harm the brain, heart, kidneys, lungs and immune system of people of all ages. Mercury is particularly harmful to unborn children and infants whose nervous systems are under development. Damage to the brain cannot be reversed.

Preliminary findings from UN Environment’s upcoming Global Mercury Assessment 2018 were presented at the meeting, where, over the course of a week, dozens of activities and events cast a spotlight on what the World Health Organisation considers a top 10 chemical threat to our health.

“It is clear from the latest mercury emissions assessment that the international community, now more than ever, needs to strengthen its resolve to reduce mercury emissions,” said Joyce Msuya, Acting Head of UN Environment. “The Minamata Convention, the world’s youngest multilateral environmental agreement, will make a real impact on human health and the environment by tackling one of the world’s most dangerous pollutants. It is encouraging that an increasing number of countries are responding proactively to the worrying rise in mercury emissions globally,” she added.

East/Southeast Asia, Sub-Saharan Africa and South America account for the greatest increases in mercury emissions between 2010 and 2015, according to the assessment. Continuing action to reduce emissions has resulted in modest decreases in emissions in some regions and sectors, but rising emissions are seen in most other regions driven largely by increased economic activity associated with certain industrial sectors. The differences between 2010 and 2015 reflect recovery following the financial crisis in 2008 that may have influenced global emissions in 2010. These factors appear to have more than offset any (technological) efforts to reduce mercury emissions.

The Parties to the Minamata Convention on Mercury have spent a year implementing the new global treaty, which includes banning new mercury mines and phasing out existing ones; taking action to reduce the use of mercury in artisanal and small-scale gold mining; phasing out mercury use in certain industrial processes, as well as in the production of everyday items, such as certain compact fluorescent lamps and batteries; and controlling the emissions of mercury as a by-product from a range of industrial sectors – including coal burning.

Exposure to mercury occurs mainly through ingestion of fish and other marine species contaminated with methylmercury, its most toxic and bioaccumulative form. People are also exposed to elemental or inorganic mercury through inhalation of mercury vapour during occupational activities or spills or through direct contact from mercury use. As mercury is an element, it is indestructible, and the Convention therefore also stipulates conditions for its interim storage and sound disposal once it becomes waste.

For centuries, mercury has been used in measuring devices such as thermometers and blood pressure devices. The Minamata Convention stipulates the phase-out of manufacturing, as well as the import and export of these and other mercury-added products by 2020. Several health care facilities in countries like South Africa, Brazil and the Philippines have demonstrated that phasing-out mercury is feasible.  Countries have been promoting the use of alternative mercury-free medical devices, lessening exposure of health professionals and the general public to mercury.

Mercury is also used in the chemical industry, for example in the production of chlorine and caustic soda. This sector is heavily investing in order to switch to mercury-free technologies, but there are still dozens of plants using tons of mercury. Provisions in the Minamata Convention require the eventual phase-out of mercury use in the chlor-alkali , as well as certain other industrial processes.

The Minamata Convention on Mercury is equipped with a financial mechanism with two components. The Global Environment Facility (GEF) has supported 110 countries to develop their Minamata Initial Assessments, and 32 countries to design their National Action Plans for Artisanal and Small-Scale Gold Mining. The second component, the Specific International Programme, approved five projects in the First Round of the Programme, amounting to one million US Dollars. At COP2, Norway and Switzerland have each pledged approximately one million US dollars for the Second Round.

Faces of change: fighting for a mercury-free future