GEF fuel cell buses for the WORLD EXPO 2010 in Shanghai

(The welcome message opens with Chinese greetings and continues in English)

The World EXPO 2010 "Better City - Better Life" opened on May 1, in Shanghai, China and runs until October 31, 2010. It is the largest exhibit ever with 70 million visitors expected from 189 countries and 57 international organisations.

This is just another occasion where the GEF contributes to the "Greening" of a global event. The GEF so far has invested $26 million and mobilized another $376 million in cofinancing to support “Greening” initiatives of big global events, such as the Commonwealth Games in India, the Sochi Olympics in Russia, or the FIFA World Cup in South Africa. 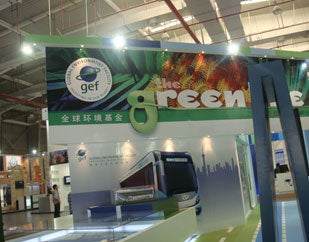 In this case the GEF is contributing USD$6 million to produce 6 fuel cell buses in Shanghai which will be used to shuttle visitors at the EXPO. This Fuel Cell Bus project, which is also the main element of the GEF exhibit, is a pilot project that started with the Olympics in Beijing, continues with a second phase in Shanghai with the World EXPO and is expected to be multiplied in more Chinese cities to mainstream sustainable transport.

As a courtesy of the Chinese Government, the GEF was invited to produce an exhibit in the international pavilion at the World EXPO. The GEF exhibit -- "The Green Line" – is special design on 108m2, displaying information on the GEF's work in climate change, mainly on sustainable transport, energy efficiency, and renewable energy in various multimedia formats. Videos in both Chinese and English are outlining the efforts made by Chinese Government and GEF to promote the low-carbon economy and the new clean vehicle development and technology improvement in China. 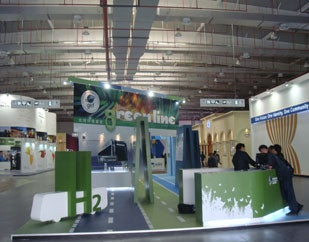 Other videos focus more on the GEF’s biodiversity portfolio in line with the GEF’s series of events linked to the International Year of Biodiversity. Posters are documenting the Fuel Cell Buses project in Beijing and Shanghai, providing project descriptions and achievements in Phase I and Phase II of the joint effort with UNDP in China. Also at the exhibit, there are models of these eco-friendly buses that run in Shanghai, demonstrating routes and hydrogen refilling stations.

On top of this, the GEF has been offered the opportunity to organize a GEF honor day at the EXPO on July 20, 2010, at which occasion the GEF will organize a number of events with key stakeholders and VIPs from the Chinese government and other GEF partners, including a reception co-hosted by the private Chinese company BROAD Air Conditioning.

The GEF was closely involved in the preparation of the EXPO, with the head of the GEF's Climate change and Chemicals team, Robert Dixon, having been selected as Commissioner General of the EXPO.