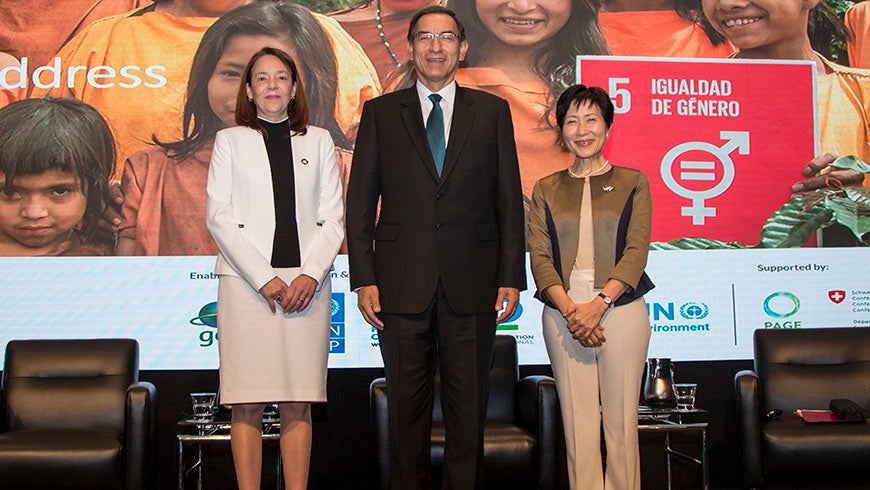 The Good Growth Conference brings together more than 300 national and international experts, government leaders, executives, civil society practitioners and indigenous leaders to share and promote solutions for the sustainable production of agricultural commodities, which are responsible for an estimated 70% of tropical deforestation worldwide. Photo: Maria Paz Gonzales/PNUD Peru.

Peru has strengthened its credentials as one of Latin America’s most sustainable countries by becoming the first nation to host the GEF supported, UNDP-led Good Growth Conference, which started in Lima on Monday (13th) and continued into the Amazon this week.

Speaking to a crowd of 500 people welcoming him to a visit in the district of Chazuta, San Martin province, on Thursday, the President of Peru, Martín Vizcarra, commended the Good Growth Conference for bringing an international delegation to the Amazon to learn from the sustainable transformation of the local community. In addition to Chazuta delegates visited the districts of Pucacaca, Sauce and Lamas.

“In Chazuta we see a positive example which demonstrates how we must all work together in harmony with nature,” remarked the President who decided to join the field trip after opening the conference on Monday and being impressed by its unique immersive approach.

At the inaugural session of the conference in Lima, the President expressed urgency in the face of climate change and mass biodiversity loss.

“Peru is a megadiverse country, but it also suffers from the effects of climate change. We have to act now. Not only with laws, but with actions in the field. Our responsibility as human beings is to see how we reverse this situation," said President Vizcarra.

Naoko Ishii, the CEO and chairperson of the Global Environment Facility, echoed the President’s concerns, during her welcome address, drawing attention to recent reports on the state of the global environment.

"The message from science is crystal clear. We humans have become the dominant forces in degrading the natural environment and have pushed Earth to its limits,” said Ishii, who called for an urgent overhaul in the way we produce, demand and finance our agriculture system to prevent any further damage to our planet.

The Amazon encompasses more than 60% of Peru’s territory where more than 2 million hectares of forest disappeared between 2001 and 2017. This forest loss is largely driven by migratory small-scale agricultural expansion.

The President’s visit to Chazuta marked the first time Peru’s leader has visited the San Martin region since taking office in 2018. While in the province, the President, and regional officials, met with a local organic cocoa cooperative encompassing 14 indigenous groups and Mestizo villages settled along the lower watershed of the Huallaga River. Once plagued by deforestation driven by the expansion of illicit coca production, today, Chazuta is a shining example of community owned and driven sustainable development. In the space of twenty years, during the transition from coca to cocoa, the region’s poverty index dropped significantly from 68 to 28 points.

The Good Growth Conference brings together more than 300 national and international experts, government leaders, executives, civil society practitioners and indigenous leaders to share and promote solutions for the sustainable production of agricultural commodities, which are responsible for an estimated 70% of tropical deforestation worldwide.

To meet today’s increasingly urgent sustainability challenges, multi-stakeholder collaboration is essential. During the conference,multinational companies, producers and local communities, NGOs and governments are encouraged to contribute to national and international thinking around how collective and systemic approaches to demand, production and financing of sustainable commodities can accelerate impact toward the UN’s Sustainable Development Goals.

“For this transformation we need champions at all levels to lead the change from business as usual and move our world into a sustainable future,” said Andrew Bovarnick, Global Head of UNDP’s Green Commodities Programme, the programme facilitating the week-long event.

“It is only through collective work to achieve sustainability in agriculture that we will bring the needed positive impacts on climate change, biodiversity and livelihoods that is urgently needed,” he added.

International leaders in government and business also agreed that systemic transformation in the commodities sector can only be achieved through innovative and stronger collaborations.

Fabiola Muñoz, Peru’s Minister of Agriculture and Irrigation,highlighted the importance of working closely with local and regional governments. “It’s impossible to manage the landscapes without strengthening the capacity of local government. If we also foster supportfor multi-sectorial efforts, and convene all related actors with the urgency which climate change demands, I am sure that we will be able to stop deforestation.”

Today, conference proceedings will come to a close in the Amazon. Delegates gained new perspectives and knowledge through learning visits, conversations with local communities, workshops and networking exercises.

This story is based on the original UNDP GGP press release.

The convening power of the GEF and the Good Growth Partnership

Year One: Highlights from the Good Growth Partnership